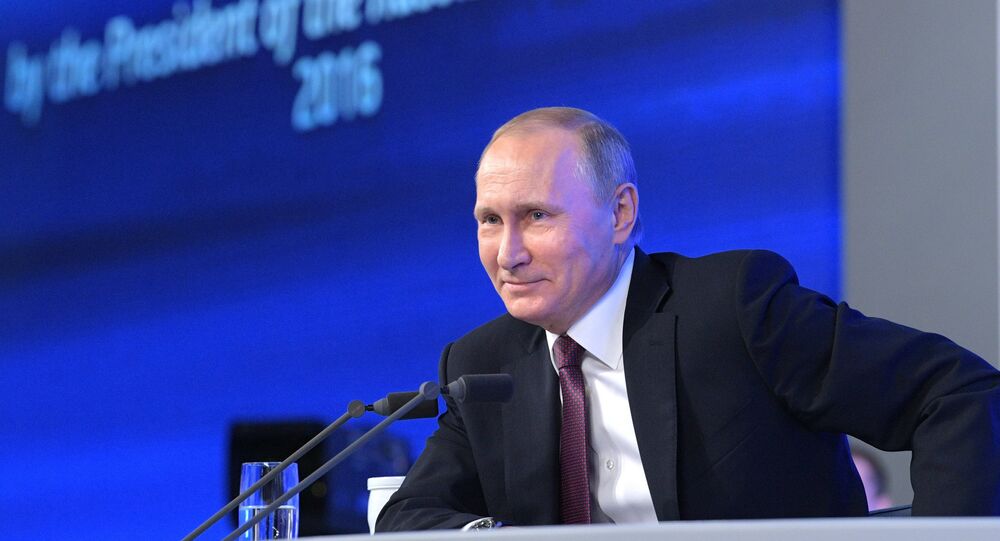 This year, the annual event will host the largest number of journalists since its establishment.

Russian President Vladimir Putin will conduct his traditional end-of-the-year press conference on Thursday. It will be the first such event since the beginning of Putin's new presidential term, which began this May.

"The main goal of this event is to set up barrier-free contact between journalists — be it federal, regional or foreign — and the head of state", Peskov told journalists.

The event will take place in Moscow's World Trade Center on the Krasnopresnenskaya embankment. The event will be broadcast live by three TV Channels — Rossiya 1, Rossiya 24 and Pervy Kanal — and three radio stations — Mayak, Vesti FM and Radio Rossiyi. The conference will be translated live into English, French and German, for the convenience of foreign reporters.

© Sputnik / Mikhael Klimentyev
Putin's Schedule Excludes 'New Year Nirvana' Or Even 1 Day of Rest – Kremlin
According to Peskov, the Kremlin expects economic and international issues — including US-Russian relations — to be the main topics this year.

"The [expected] topics are, of course, both the internal economy [per se], and the economy in relation to the rather unfriendly international situation", Peskov told journalists.

According to Peskov, the said situation is hostile and aggressive, which sparks certain changes in the entire international economy, with the result of it being unpredictable.

The spokesperson also noted that the regional agenda will be a major issue, as regional problems often differ from federal ones. Peskov believes that the objective of the annual press conference is to "broadcast the president's opinion, his estimation of various events, regarding the entire set of topics that people are concerned about". The spokesman disclosed that after press conferences like this, a number of these issues are then reflected in the president's orders.

This year, the upcoming event will host the largest number of journalists ever — 1,702 people. Back in 2001, when the annual conference was established, it hosted only some 500 reporters. Last year, it was 1,640 reporters.

© Sputnik / Vladimir Rodionov
Kremlin Spokesman Reveals What Keeps Putin Awake at Night
Some two-thirds of this number will be reporters from the various regions of Russia. The event will also host several dozen foreign journalists from Azerbaijan, Belarus, the UK, Germany, China, the US, Ukraine, Japan and other nations.

As an established tradition, journalists bring bright posters, signs and even stuffed toys, in order to attract the president's attention. This time, the Kremlin issued an official plea not to bring posters larger than an A3 format.

The annual press conference is often referred to as the "Big Press Conference" because of its length. The first event in 2001 was the shortest — it only lasted 95 minutes. In 2008, the event took a whopping 4 hours 40 minutes — the longest talk so far. On average, the event lasts about 3 hours. It is the president himself who determines the length of the event.

"Not many [leaders] in the world host such sessions of communication with journalists", Peskov noted. "But we consider this necessary in terms of fully informing the media, and, by extent — the entire society — about the current situation and the year's results".

"The lack of staging here is obvious", he underscored.

© AP Photo / Carolyn Kaster
Canada’s Trudeau Reveals What He Thinks About Putin and Trump
According to Peskov, Vladimir Putin has spent several days preparing for this press conference (although he attended to the pressing matters, too).

"In between [pressing matters] and long into the night, the president familiarises himself with a vast amount of information, prepared by the ministers, department heads and expert divisions of the administration", Peskov said.

After the conference, Putin will attend a gala dedicated to the National Security Worker's Day. Putin, who used to work in the Soviet Union's intelligence service himself, attends this event regularly.