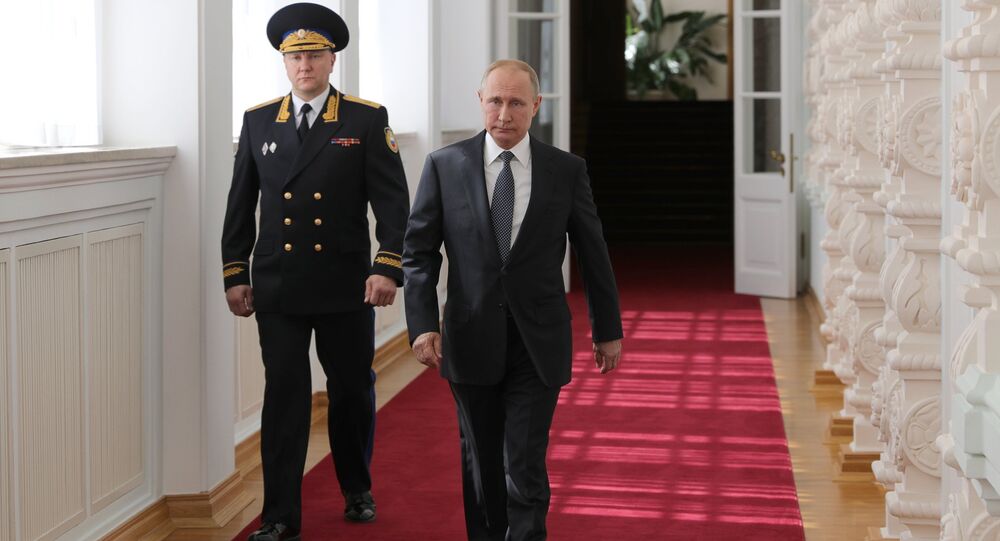 The press conference will be held later on Thursday. This year, record 1,700 journalists have been accredited for the event.

"We do not introduce any restrictions. The president does not differentiate between any countries … The journalists are arriving. There are journalists from Asia, the United Arab Emirates, the United States, who have arrived here, as well as a lot of Europeans, Israelis and [reporters from] other countries," Peskov told Russia’s Channel One.

© Sputnik / Sergey Guneev
Putin Approves Military Doctrine of Union State - Order
The spokesman recalled that in France, the reporters of RT and Sputnik had been denied accreditation to the Elysee Palace, adding that such situation was not a case in Russia. Peskov said that foreign journalists who had received accreditation from the Russian Foreign Ministry and had applied for accreditation for Putin’s press conference would be granted access to the event.

The spokesman emphasized that in giving accreditation to reporters, the Kremlin was guided by the law on media outlets which granted equal access to every journalist.

© Sputnik / Алексей Никольский
French Media Reveals Reason Behind Putin's Success at Int'l Arena
Peskov subsequently said in an interview with the Rossiya 24 broadcaster that Putin did not like answering the same question at press conferences, adding that such situations often happened. "I think the president does not really like it. But he patiently answers all the questions," Peskov pointed out.

The spokesman noted that there were no subjects that he himself did not like or was tired of in his communication with reporters.

Russian President Vladimir Putin does not use a mobile phone and he receives information from various other sources, including the internet, Peskov stressed.

"There are various folders with printouts, digests printed on paper and TV digests. There a variety [of sources of information] … The president can surf the internet by himself on a computer … As far as I know, he does not have a telephone," Peskov told the Rossiya 24 broadcaster, when asked from what sources Putin received information.

Russian Defense Ministry
Moscow Will Take Steps to Boost Security When US Leaves INF Treaty - Putin
The spokesman said that using a smartphone envisaged full transparency which a president, "especially the president of such country as Russia, and such president as Putin" could not afford. Peskov continued by saying that life had taught him not to trust one source of information or a media outlet, adding that he always sought to check information he received.

Meanwhile, the New Year holiday schedule of Russian President Vladimir Putin does not include rest in a common sense of this word, like a "nirvana" for several days or even one-day relax, the Kremlin spokesman, Dmitry Peskov, said.

READ MORE: Putin Was Not Ready to Be President When Yeltsin Offered to Run for Election

The spokesman explained that something happened inside the country and on the international arena all the time so the president had to always work.