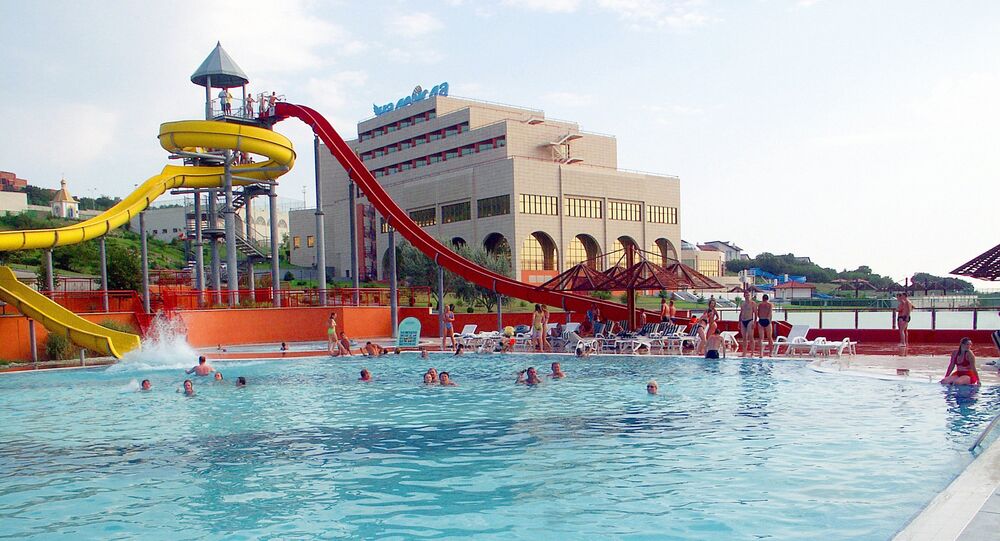 He noted that on the instructions of the regional Governor Veniamin Kondratyev his ministry jointly with hoteliers worked out the particulars of the all-inclusive system in 2017.

"Our ministry has analyzed both domestic and foreign experience in rendering services under this format as well as Russian and foreign legal framework dealing with the quality of services and applied the best practices in the Krasnodar Territory," added the ministry.

© Sputnik / Vitaly Timkiv
Balneotherapy Attracts Tourists to the Krasnodar Region, Russia
Local hoteliers representing major hotels, including hotel networks, also confirmed how efficient the system is. "Such hotels' occupancy has got to between 90-100 percent and the round-the-year occupancy of the all-inclusive hotels is much higher than that of the hotels with similar star-rating but not all-inclusive," explained hoteliers.
© Sputnik / Vitaliy Timkiv
Reception at Swissotel Resort Sochi Kamelia 5* in Sochi where Brazil's national team will stay during the 2018 FIFA World Cup

Accommodation prices in such hotels are competitive enough. According to hoteliers the average price in a three-star all-inclusive hotel during the high season starts at 3,500 rubles per person a day and 1,800 rubles during the low season.

"The attraction of the all-inclusive system helps to raise the level of service and quality. This, in turn, reliably increases the influx of tourists to resort places and provides for their round-the-year occupancy. Additionally, the region-wide use of this system would help strengthen the position of the Krasnodar Territory resorts on the world tourist market," concluded Constantinidi.

According to the ministry, another project that would be good for building up the tourist traffic in the south of Russia by 10 percent and increase the average time of tourists' stay by 15 percent is the Bosporan Kingdom Golden Ring.

The Governor says that the project initiated by his region will help unite the cultural and historical legacy of four regions in the south of Russia by presenting this potential on the world tourist market.

The Federal Agency for Tourism has included the project in the top-10 Russian itineraries intended for foreign tourists. The Bosporan Kingdom Golden Ring itineraries cover about 30 Bosporan historical monuments and modern places of interest. They are located in 10 cities of Russia's southern regions: the Krasnodar Territory, the Republic of Crimea, the city of Sevastopol and the Rostov Region.

"Under the project, the Krasnodar Territory is working on the Bosporan Kingdom Wine Roads itinerary. The region is home to over 60 large and small wineries which receive hundreds of thousands of tourists from all over Russia and abroad," said the ministry.

© Sputnik / Ekaterina Shtukina
Russia's Kurilsky Reserve: Magnificent Nature Retreat in the Land of Volcanoes
14
In the authorities' estimate, the territory welcomed more than 16.5 million tourists from the beginning of the year to December 1, which is six percent more than over the same period of 2017. During the summer its resorts accommodated more than 10 million holiday-makers — five percent more than last summer. The ministry forecasts not less than 16.7 million visitors in the region by the year-end.

The 2018 FIFA World Cup alone attracted about 800,000 tourists from Sweden, Iceland, Switzerland, Germany, Republic of Korea, Italy, Argentina and other countries to Sochi, Anapa, Gelendzhik and Krasnodar during the championship. Their influx to Krasnodar alone almost tripled. In addition, over 55,000 visitors, including from abroad, took part in the tourist festival Ancient Legacy of Russia, which opened this year's summer resort season.

In 2017 the Krasnodar Territory received over 16 million tourists thus breaking its own record. In 2016 the region was visited by more than 15.8 million people and by more than 15 million in 2015. Sochi, Anapa and Gelendzhik are traditional leaders among resort areas by the number of tourists.