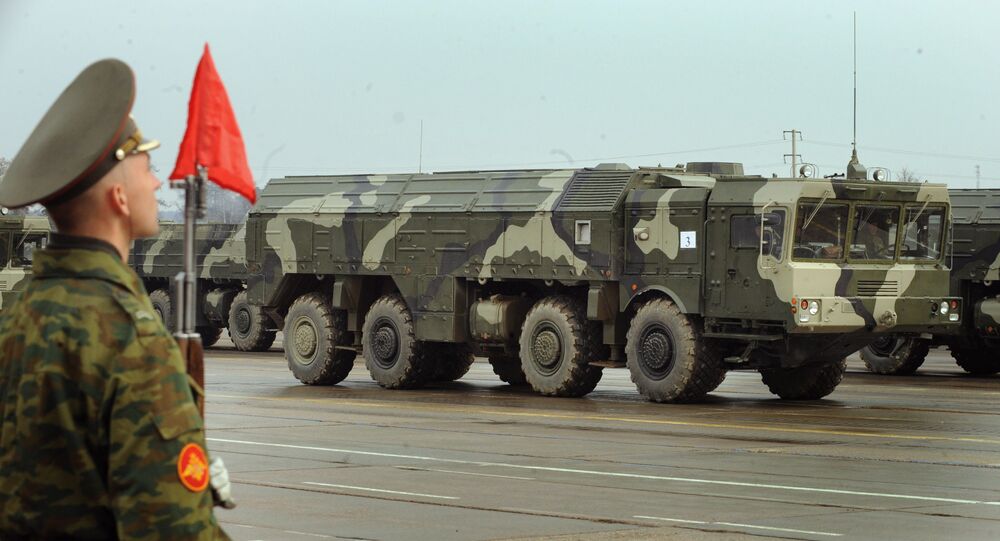 MOSCOW (Sputnik) - Russia has never carried out tests of Iskander-M tactical ballistic missile systems, as is claimed by the United States, and therefore has not violated the Intermediate-Range Nuclear Forces (INF) Treaty, head of the Russian State Duma's Committee on Defence Vladimir Shamanov said on Thursday.

"They reproach us over the Iskander-M missile, which allegedly, according to classified information and available evidence, we have tested. I can absolutely honestly say that no tests [have been conducted], and we have tested no missiles of such a range", Shamanov said at a plenary session of Russia's lower house.

© AP Photo / Dave Caulkin
Ex-Pentagon Analyst: US INF Ultimatum Part of Plan to Boost Nuke Arms Industry
The comment was made following Tuesday's announcement by US Secretary of State Mike Pompeo, who said that Washington would suspend its adherence to the INF Treaty in 60 days unless Russia returned to full compliance with the agreement. This move comes in line with the previous statements made by US President Donald Trump, insisting that Moscow had violated the agreement and thus forcing Washington to exit it. Russia has denied the claims that it breached the treaty's terms multiple times.

Moscow, for its part, has repeatedly accused Washington of violating the INF Treaty. In particular, Russia has stated that the United States was deploying launchers for Tomahawk missiles in Romania and Poland, something that was prohibited by the agreement. Russia has also pointed to the fact that the US was developing combat drones and financing research on the development of a ground-launched cruise missile

The INF Treaty was signed between the Soviet Union and the United States in December 1987 and required the parties to destroy their ground-launched ballistic and cruise missiles with ranges of between 500 and 5,500 kilometres (from 311 to 3,317 miles).