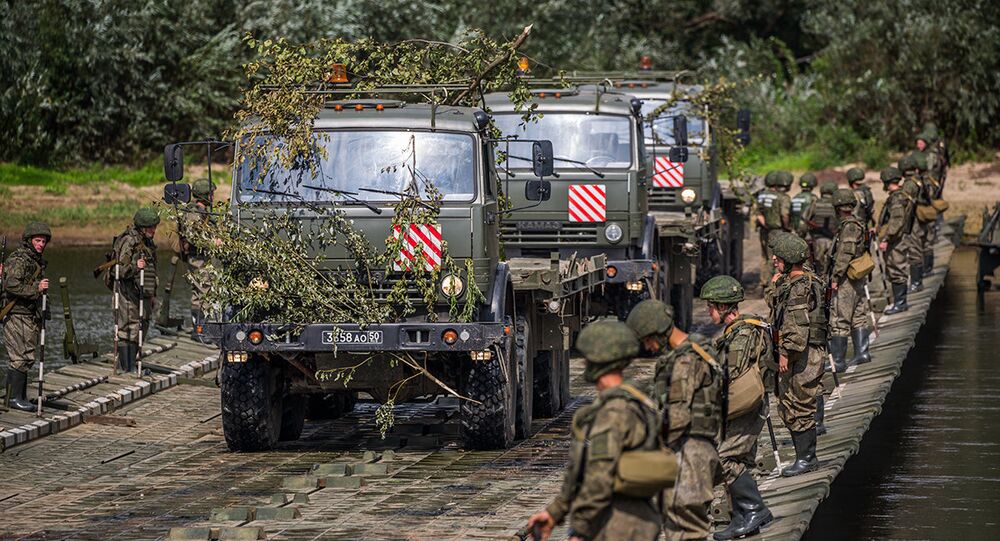 MOSCOW (Sputnik) - The activities of the United States, aimed at preserving the predominant role of Washington in the world is one of the main factors deteriorating the international situation, the Chief of the Russian General Staff, Gen. Valery Gerasimov, noted.

If the Intermediate-Range Nuclear Forces (INF) Treaty is cancelled, then Russian responsive measures will target the countries that accommodate US intermediate-range and short-range missiles, the Chief of the Russian General Staff, Gen. Valery Gerasimov, has stated.

The creation of a solid radar field near Russia's borders has been completed, this guarantees the detection of ballistic missiles from all directions, Gerasimov said.

"As military professionals, you should understand that not US territory, but the countries that accommodate US systems of intermediate-range and short-range missiles will become the targets of Russian responsive measures", Gerasimov told foreign military attaches.

"One of the main destructive factors deteriorating the international situation is the activities of the United States aimed at retaining the predominant role of the US in the world and excluding other countries from competition”, Gerasimov said.

The chief of the Russian General Staff stressed that for these purposes Washington and its allies are taking measures to contain Russia and discredit its role in international affairs.

The statements come after US Secretary of State Mike Pompeo said during a press conference in Brussels that the United States would suspend its adherence to the INF Treaty in 60 days unless Russia returns to full compliance with the agreement.

The United States is trying to create a Kurdish quasi-state formation in Syria, which would be independent of Damascus, the chief of the Russian General Staff has noted.

"The situation on the eastern border of the Euphrates is deteriorating. The United States, falling back on Syrian Kurds, is trying to create a quasi-state formation independent from the central government there. They are already forming the government of the so-called Democratic Federation of Northern Syria. Americans support Kurds' separatist aspirations by delivering weapons and military equipment to them, and they are thus allowing Arabic tribes' oppression by Kurds", Gerasimov said.

While Damascus has already regained control over important territories that had been occupied by rebel and terrorist groups during the war, some northeastern Syrian regions are still controlled by the Kurdish-led Syrian Democratic Forces, which includes the Kurdish People's Protection Units (YPG), backed by the United States. Damascus considers its actions illegal.

"Meanwhile, the funds from the sale of oil products are also being spent on financing terrorists belonging to Daesh*", Gerasimov indicated.

The general went on to say that Daesh militants in Syria are present only east of the Euphrates, in US-controlled territory.

"In December last year, the active phase of the operation to eliminate gangs in Syria was completed. Today, Daesh militants are only east of the Euphrates, on the territory controlled by the United States", Gerasimov said.

He also stressed that so-called "sleeping" cells of the Daesh terrorist organisation have progressed to active operations, have begun expanding their zone of influence.

"The United States is always telling us about some fight against Daesh in the east of Syria. But we are seeing the opposite. 'Sleeping' terrorist cells have become active and as a result, Daesh has begun expanding its zone of influence in the east of the country", Gerasimov said.

The chief of Russia's General Staff added that the terrorists in the west of Syria had been eliminated by the Syrian authorities and special services.

The US DoD agreed to decrease the intensify of NATO exercises near Russia's borders during the 2018 FIFA World Cup at Moscow's request, Chief of the Russian General Staff Gen. Valery Gerasimov stated.

"A positive example of such an interaction was the positive reaction of the US Defence Department to [Russia's] request to reduce the intensity of NATO’s operational and combat training [exercises] near Russia's borders during the FIFA World Cup," Gerasimov said at a meeting with foreign military attaches.

According to Gerasimov, this was one of the positive examples of Russia-US military cooperation within the framework of agreements preventing maritime and aviation incidents. Russia hosted the championship on June 14 — July 15.