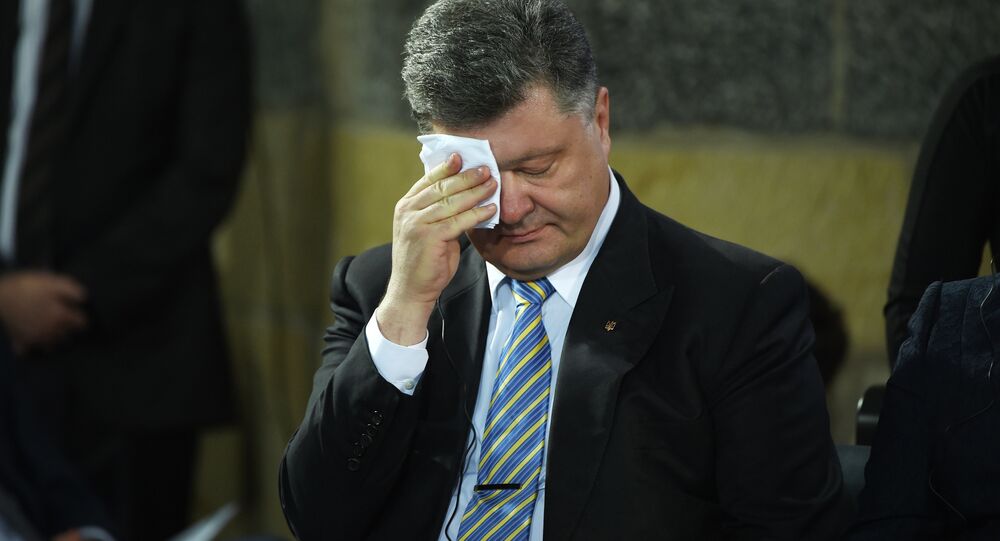 MOSCOW (Sputnik) - Ukrainian President Petro Poroshenko seeks to improve his approval rating through staging provocations in the Black Sea and introducing martial law in the country ahead of the presidential election, Russian Foreign Ministry’s spokeswoman Zakharova said on Friday.

"The intention of the Kiev regime, its representatives and, of course, President Petro Poroshenko is clear. Its primary target is using a martial law for boosting approval rating, which is rapidly falling, in order to earn points riding another wave of Russiphobia," the foreign ministry spokeswoman Maria Zakharova said at a briefing.

The spokeswoman also noted that Petro Poroshenko's attempts to retain power cause him to take steps which are bound to bring about dangerous consequences for Ukraine.

"We urge the United Nations, the Organization for Security and Co-operation in Europe, the Council of Europe and other organizations to pay attention to the threat of a conflict scenario and the plight of the human rights situation in Ukraine. We warn the West of the extreme danger of this enterprise of Poroshenko, who in his desperate desire to retain power, is dragging the country into another gamble, which is fraught with disastrous consequences for Ukraine and the European security," the Russian official said, addressing the incident in the Kerch Strait.

© AP Photo / Irina Gorbaseva
Poroshenko Signs Decree to Introduce Martial Law in Ukraine
Commenting on Poroshenko's decision to impose restrictions on Russian nationals aged 16-60 entering Ukraine, Zahharova ruled out the possibility of responding in kind to Kiev's decision to limit entry to Ukraine for Russian male nationals stressing that it was 'simply scary to talk about responding with similar measures' and if anyone attempted 'to act similarly to Kiev, it may cause some kind of frenzy'.

The spokeswoman also addressed the issue of Trump-Putin talks stressing that US President Donald Trump's decision to call off the planned meeting with Russian President Vladimir Putin in Buenos Aires has been the result of the US domestic politics rather than a reaction to the recent Kerch Strait incident.

"Was the provocation, arranged by Kiev in that area, the real reason for canceling [the meeting]? This was the official reason that we heard and took into consideration. Whether it was the real one? I think one should look for an answer in the US domestic political situation," Zakharova said.

Earlier this week, Trump tweeted that he had decided to cancel the meeting with Putin after receiving a report on the incident in the Kerch Strait, in which Russian border patrol detained Ukrainian Navy ships and sailors for illegally crossing the Russian water border.

Maria Zahharova's comments come after three ships of the Ukrainian Navy entered the Russian territorial waters last week near the Kerch Strait. The ships were detained after failing to react to legal demands to abandon dangerous maneuvers. After the incident, Kiev introduced martial law for 30 days in the regions bordering with Russia and along the shores of the Black Sea and the Sea of Azov. Russian Foreign Minister Sergei Lavrov called the incident a provocation.

© REUTERS / Murad Sezer
Ukraine to Ask Turkey to Close Bosphorus to Russian Ships Amid Kerch Strait Rift
The ships and their crews were detained after failing to react to legal demands to abandon dangerous maneuvers.

After the incident, the Ukrainian authorities implemented martial law for 30 days in 10 out of 24 regions of the country — along the border with Russia and along the shores of the Black Sea and the Sea of Azov. Martial law allows government authorities to temporarily limit the constitutional rights and freedoms of the people, including suffrage.

Putin called the situation in the Kerch Strait a provocation organized by Kiev to boost falling approval rankings of Ukrainian President Petro Poroshenko ahead of the upcoming presidential election.