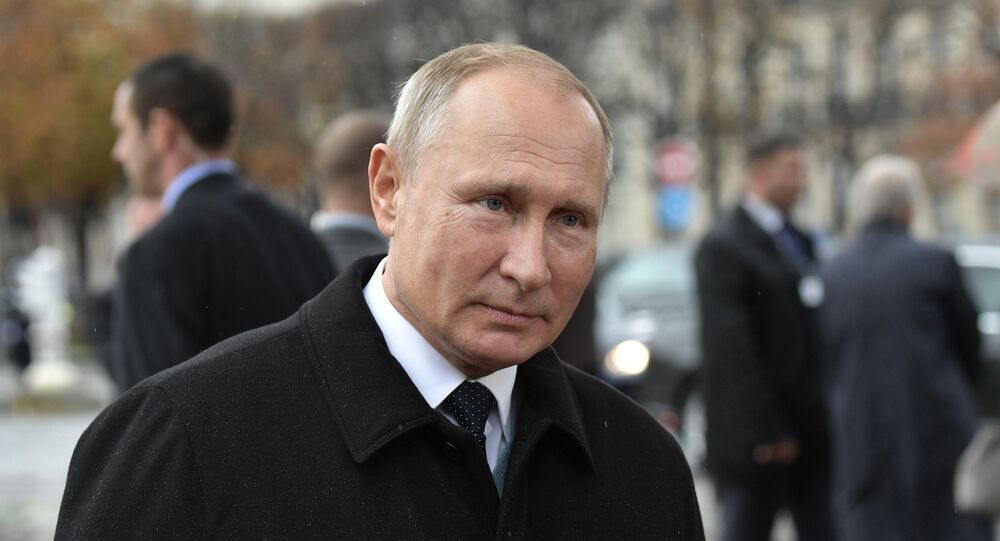 MOSCOW (Sputnik) - The incident in the Kerch Strait appears to have been a provocation prepared in advance, a pretext to introduce martial law in Ukraine, Russian President Vladimir Putin said.

'There are clear signs of a provocation prepared in advance in order to use this as a pretext to introduce martial law in the country. This has nothing to do with any attempts to improve the Russian-Ukrainian relationship. This is an attempt to raise stakes', Putin said at Russia Calling Investment Forum.

The Russian president added that Poroshenko needed to create obstacles for his rivals from the opposition given his low popularity ratings ahead of the election.

'As for incidents in the Black Sea, this is undoubtedly a provocation. A provocation set up by the incumbent authorities ahead of the presidential elections in Ukraine in March next year. The incumbent president is somewhere in the fifth place in the rating, I think. He might not even make it to the runoff, so something has to be done to raise stakes and set up insurmountable obstacles for his rivals, first of all, those from the opposition', the president said.

Putin pointed out that the Kerch Strait situation was a minor border incident, especially compared with the conflict in Ukraine's southeast or Crimea's decision to rejoin Russia in 2014.

'And no martial law was introduced, but now there's a minor incident in the Black Sea and they introduced martial law in the country', Putin said.

The statement comes after Ukrainian President Petro Poroshenko signed a decree to impose martial law in a number of Ukrainian regions, following an incident when three Ukrainian vessels were seized by Russia in the Black Sea after breaching the Russian maritime border.

Russian border guards fulfilled their duties on the protection of the state border during the incident with Ukrainian naval vessels in the Kerch Strait, Russian President Vladimir Putin noted.

'And how should the border guards act? Military vessels invaded Russian territorial waters and did not respond. It was unclear what they are going to do. How should they act? If they [the border guards] acted differently, they all had to be brought to justice. They fulfilled their military duty and did it very well. In fact, they performed their legitimate functions to protect the territorial integrity of Russia. I think your country would have acted in exactly the same way, this is an absolutely obvious thing', Putin said at a forum.

Putin stressed that Ukrainian sailors had been even offered a maritime pilot, however, no response was received following this.

'I draw your attention to the fact that they entered our territorial waters that were Russian territorial waters even before the reunification of Crimea with Russia… The began to move straight to this bridge without responding to the requests of our border guards. They did not react to the offers to drop anchor. They did not respond to the offer to take a maritime pilot even after crossing our state border — they were silent, they did not respond at all', the president noted.

© REUTERS / Guido Bergmann/Courtesy of Bundesregierung
France, Germany Reportedly Against New Sanctions on Russia Over Kerch Strait Row
The incident that has worsened Russia-Ukraine relations took place on 25 November, when Ukraine's Berdyansk and Nikopol gunboats and the Yany Kapu tugboat illegally crossed the Russian maritime border and sailed toward the Kerch Strait, the entrance to the Sea of Azov. The vessels were seized by Russia after failing to respond to a demand to stop. Over 20 Ukrainian sailors were also detained.

In response, the Ukrainian authorities decided on 26 November to impose martial law in select regions of Ukraine that lie on the Russian border as well as the coasts of the Black Sea and the Sea of Azov for 30 days.