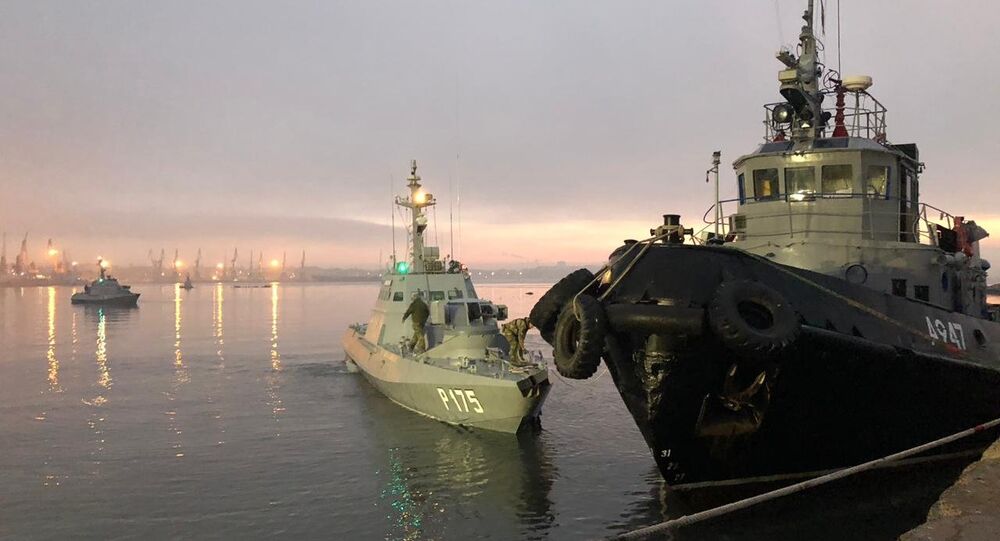 Russia has warned Ukraine against efforts to revise the status of the Sea of Azov in violation of international law, urging Kiev to refrain from attempts to unilaterally establish new state borders. Tensions climaxed on Sunday after Ukrainian ships entered Russian territorial waters. Here’s a timeline of the provocation by Kiev.

On 25 November, a trio of Ukrainian ships crossed into temporarily off-limits Russian territorial waters, moving from the Black Sea to the Kerch Strait, thus violating Articles 19 and 21 of the United Nations Convention of Sea Law.

In a parallel development, another two Ukrainian vessels were heading “at full speed” from the port city of Berdyansk in the Sea of Azov towards the Kerch Strait, which the security service described as a zone where a “provocation,” organised by Kiev, was unfolding.

© Photo : Crimea's FSB Press Service
Attempt to Avoid Election? Why Poroshenko Wants Martial Law Over Kerch Incident
In a bid to halt the Ukrainian naval vessels’ attempts to pass through the Kerch Strait, Russia deployed its own naval assets, as well as combat aircraft, with Su-25 jets patrolling the area in the vicinity of the Crimean Bridge.

As the ships approached the Kerch Strait, FSB vessels went on to pursue the intruders, who failed to respond to demands to leave the area and proceeded to make “dangerous manoeuvres,” thus prompting the Russian side to open fire.  The three ships were eventually detained and escorted to the port of Kerch.

Reacting to the flagrant violation of key provisions of international law, the Russian Foreign Ministry accused Ukraine of an “unequivocal provocation” and aggression.

Kremlin spokesman Dmitry Peskov also underscored the fact that the Russian border guards acted in compliance with international law to curb the foreign intrusion and protect the country’s territory from violators, who did not respond to any requests to withdraw from the area.

After calling on its allies and partners to provide military assistance to “deter the aggressor,” Ukrainian President Petro Poroshenko signed a decree introducing martial law in the country that would be effective from November 26 to January 25, 2019. Besides the unfortunate call to arms, Kiev encouraged its Western partners to step up sanctions on Russia.

Although Ukrainian ships violated international law by illegally entering Russia’s territorial waters, the West, as is wont, was quick to blame the escalation of the situation in the Kerch Strait on Moscow.

UK Prime Minister Theresa May, who has developed a reputation for accusing Russia with an accuracy of ”highly likely,” joined President of the European Council Donald Tusk, who seemingly never kept his feelings for Ukraine inside himself, having even travelled to Kiev to mark the one-year anniversary of the 2014 Maidan revolution, in ”condemning” Russia’s “act of aggression.”

I condemn Russian use of force in Azov Sea. Russian authorities must return Ukrainian sailors, vessels & refrain from further provocations.
I discussed situation with Pres. @poroshenko and will meet his representatives later today.
Europe will stay united in support of Ukraine.

The UK utterly condemns Russia's use of force against Ukrainian vessels entering the Sea of Azov. Once again, we see Russian CONTEMPT for international norms and Ukrainian sovereignty. Russia must release detained Ukrainian sailors and guarantee free passage through Kerch Straits

Some European officials, including German Foreign Minister Heiko Maas and his Austrian counterpart Karin Kneissl, called on both sides to de-escalate tensions – but at the same time seemingly focused on Russia:

Seriously concerned about the military escalation btw #Russia and #Ukraine in the Kerch Strait. Both sides must refrain from using military force. On AT initiative, #EU to discuss appropriate steps.

TWEET: "The situation is concerning. The Russian blockade of the passage to the Azov Sea is unacceptable. It is important to lift this blockade. We call on both sides to de-escalate”.

Blaming all mortal sins on Russia and refusing to accept its moves has been a common phenomenon: even though 97 percent of Crimea’s population voted in favour of reuniting with Russia in a 2014 referendum, the international community has consistently neglected people’s will, refusing to recognise the outcome of the vote – and imposing more and more sanctions on Russia.

Tensions in the maritime region of the Sea of Azov mounted this year after Ukraine detained two Russian vessels heading to ports in Crimea, which Kiev – and the majority of Western nations – considers to be Ukrainian territory.

Last month, the Ukrainian parliament passed a draft law enabling Kiev to expand maritime controls over an additional 12 nautical miles off its southern coast, ostensibly to curb smuggling in the Black Sea.

Most recently, Russia warned Ukraine against any attempts to alter the status of the Sea of Azov as inland waters shared by the two countries. Such efforts would be deemed as a violation of international laws, Moscow added, urging Kiev to refrain from any steps to unilaterally establish a state border in the Sea of Azov which Russia does not recognise.