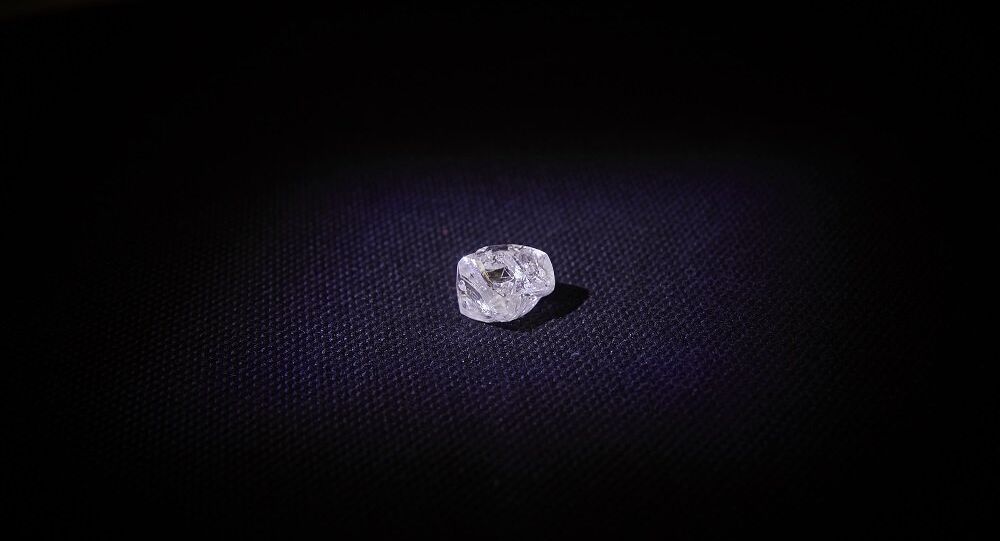 The Alrosa diamond mining group began mining at its new Verkhne-Munskoye deposit in Yakutia, northeastern Russia on October 31, with Russian President Vladimir Putin on hand via teleconference to personally inaugurate the start of operations at the facility.

The diamond, an octahedral-shaped gem with a mild yellowish tinge, was extracted from the ore of one of the mining facility's four kimberlite pipes, the traditional carrot-shaped intrusions used in mining.

The diamond has a mass of 51.49 carats, dimensions of 23x22x15mm, and is estimated to be over 350 million years old, the company said in a press statement.

Alexander Makhrachev, director of the Alrosa subsidiary Udachny Mining and Processing Division, said the find was "very encouraging, and points to the field's strong potential."

© Photo : PJSC ALROSA
Hope Diamond Eat Your Heart Out! Two Huge, Rare Gemstones Discovered in Russia
"Despite small impurities and cracks, the diamond is without a doubt of gem quality, and after it is cut, we will receive one or several diamonds with good characteristics," Makhrachev added.

The Verkhne-Munskoye deposit officially started operations on October 31, and is expected to bring in about 1.8 million carats per year for over twenty years. Yakutia contains close to 95 percent of Russia's diamond riches, and is the historic home of over a quarter of all diamonds mined in the world. Earlier this year, miners found two large diamonds with a mass of 97.92 and 85.62 carats at another Yakutia-based field.

Alrosa is one of the largest diamond producers in the world, accounting for about 29 percent of global production, with operations in Yakutia and Arkhangelsk region. In 2017, the company reported total output of 39.6 million carats.