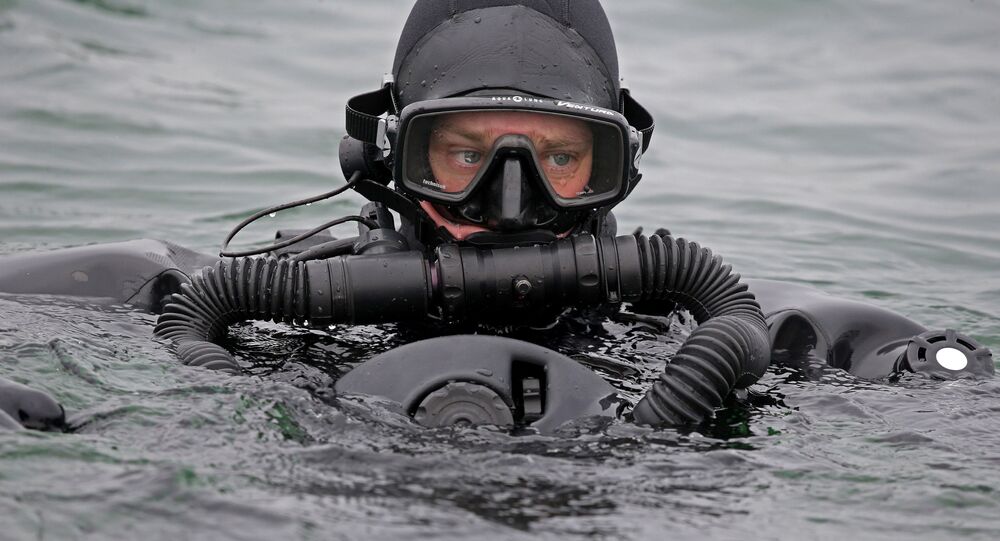 The record-setting dive took place in a deep-water range in the East Sea (Sea of Japan) from aboard the Pacific Fleet's new submarine rescue ship, the Igor Belousov, and was carried out using new technology allowing divers to withstand more than 40 times the Earth's atmospheric pressure.

The divers were able to descend to the incredible depth, the pressure of which would normally crush an unprepared human body, by using a special Navy pressure chamber, part of the GvK-450 deep-water diving rescue system, designed to allow divers to conquer depths of up to 450 meters. The level of pressure exerted 416 meters beneath the water's surface is equivalent to over 41 times the Earth's atmospheric pressure at sea level.

© Photo : Youtube/Sputnik
Diving Under the Ice of Lake Baikal
The GvK-450 was specially developed by the Navy's Research Institute for Rescue and Submarine Technologies, and aimed at expanding the Navy's capabilities to carry out search and rescue operations specifically for submarines in distress.

During their deep sea stay, the Pacific Fleet divers also carried out a training mission, connecting oxygen supply hoses to a model of a submarine compartment.

The Project 21300 Igor Belousov search and rescue vessel, which comes standard with the GvK-450 system, was commissioned by the Russian Navy in November 2015, and serves in the Pacific Fleet. Up to four more Project 21300 ships are planned, with a second ship included in Russia's state armaments program and expected to be completed by 2023.

A US Navy diver set the absolute diving world record in 2006, descending to a depth of 610 meters (2000 feet) wearing an atmospheric diving system (ADS) suit.

In the Ocean Deep: What You Don't Expect to See While Diving in Greece

Diving to the Rescue: Man Saves His Drone From Certain Death in Cold Waters

Diving Under the Ice of Lake Baikal