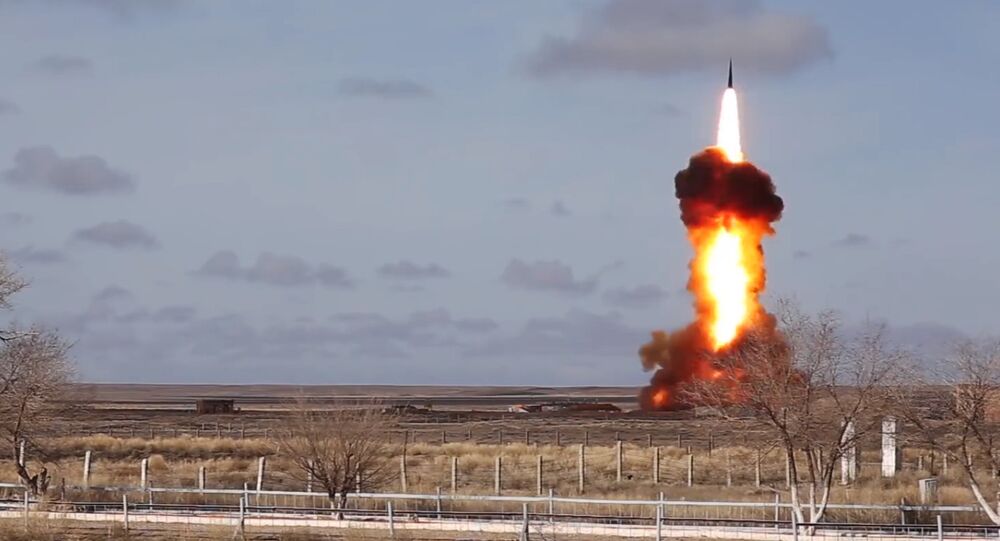 "Regarding the 9M729 missile … This missile is claimed to be Russia's violation of the INF Treaty, since we allegedly tested it at a distance prohibited by the agreement. But at the earlier stages of discussion of this matter, we gave the American colleagues fully detailed information about when and at what distance tests of this missile had been conducted," Ryabkov said during a talk show aired by Russia's Channel One television.

© AFP 2021 / ALEXANDER NEMENOV
Possible US Exit From INF Dangerous Shift for Very Concept of Nuclear Deterrence – Prof
"Moreover, a regular launch of this missile at a range substantially shorter than 500 kilometers [some 310 miles] was carried out during last year's Zapad-2017 exercises," Ryabkov stressed.

Ryabkov also said Wednesday that discussion of the INF Treaty would be a priority at the November 11 meeting between Russian President Vladimir Putin and US President Donald Trump. Trump has threatened that the US will withdraw from the treaty, citing alleged Russian violations of the pact.

"I am convinced that the topic will be among the main ones when the presidents meet and the conversation starts. We need to figure out where the United States is moving on this issue," Ryabkov said.

© Sputnik / Alexey Filippov
Trump's Decision to Exit INF 'Dangerous Step' Towards New Arms Race - Scholar
The INF treaty was signed between the Soviet Union and the United States in December 1987 and required the parties to destroy their ground-launched ballistic and cruise missiles with ranges between 500 and 5,500 kilometers (310 to 3,417 miles). The INF Treaty has an unlimited duration, but each side can terminate it by providing compelling evidence to substantiate its decision.

Russia and the United States have repeatedly accused each other of violating the treaty. Moscow, in particular, stated that the United States was deploying launchers for Tomahawk missiles in Romania and Poland, an act prohibited under the agreement.

"There is a deficit in dialogue, in dialogue platforms and formats with the United States on various levels. In this situation, the presidential level has twice the importance… The top figures' contact will, of course, help stabilize the situation," Ryabkov said on Russia's Channel One on Wednesday.

"We in the Foreign Ministry have begun preparations for the upcoming contact [between Putin and Trump]… We can see certain prospects [of holding talks] not only on the sidelines of international events but also of holding full-fledged visits," Ryabkov added.

However, Russian Deputy Foreign Minister did not rule out Washington could continue withdrawing from international agreements.

© Sputnik / Vladimir Rodionov
Russia, US to Enter New Arms Race if New Start Treaty Not Extended – US Ex-Diplomat
"This is concerning. The United States has recently withdrawn from a series of international treaties — from the [Paris] climate agreement to the involvement in UNESCO and the Universal Postal Union. The INF Treaty and the JCPOA on Iran are just two out of multiple examples of such actions. We do not know if there is an end to this road," Ryabkov said.

Moreover, Russia might eventually lose its New START treaty on strategic arms reduction with the United States, as well as its control over arms, as there is no basis for optimism with regard to US actions, Ryabkov stressed.

"I cannot yet see any basis for the creation of such an artificially optimistic environment. On the contrary, I believe that after some time, we might lose the second treaty, New START, too, due to such an approach of the US side. We might lose control over arms, just like we have to some extent lost control over expressions lately […] After the INF treaty, we may lose one more key bilateral deal — the New Start treaty of 2010," the diplomat pointed out.

Meanwhile, Russia is proposing a draft resolution supporting the preservation of the INF Treaty at the UN General Assembly, Ryabkov said.

"Today, Russia is submitting a draft resolution supporting the preservation of the [INF] treaty at the United Nations General Assembly First Committee. We will see how states, including US allies, act in this situation," Rybakov concluded.