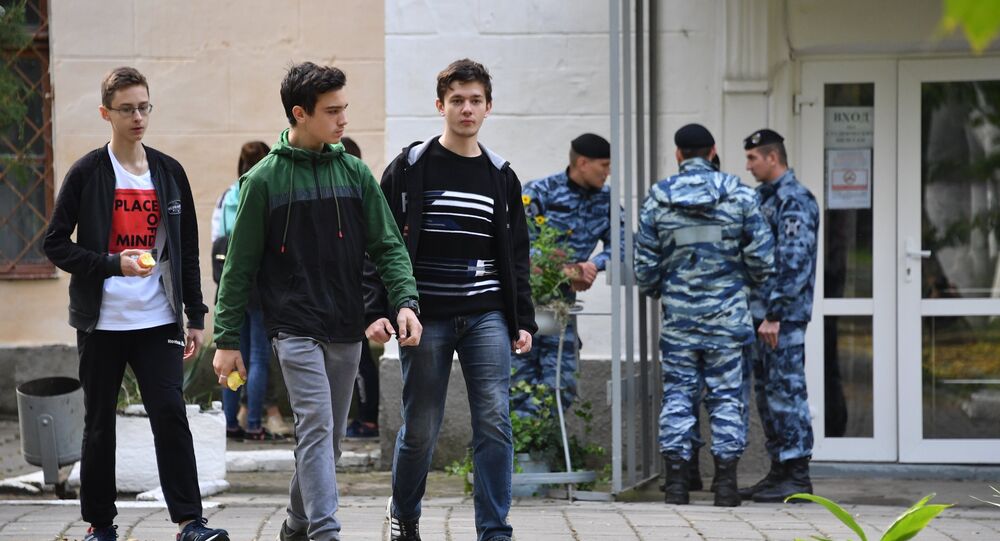 KERCH (Sputnik) - The students of the college in the Crimean city of Kerch, where a fourth-year student detonated a bomb and opened fire last Wednesday, have resumed their studies in the nearby building on Tuesday, a Sputnik correspondent reported.

A short queue has formed in front of the entrance because the students are allowed to enter the college group by group only after their papers are checked.

"I am ready for college. I was frightened at the beginning but now I have gotten over it. Besides, everything took place in another building," a student told Sputnik.

A spokesperson for the Rostov Region Directorate of the Russian Emergencies Ministry told journalists that there was no danger that the building could collapse.

"An examination has been carried out. According to the preliminary information, there is no danger of [the building's] collapse," the spokesperson said.

Meanwhile, a spokesperson for Moscow's Emergency Children's Surgery and Traumatology Research Institute told Sputnik that the condition of all injured, who had been transported to the hospital after the incident, had slightly improved.

"Everyone is better now. Several [patients] have been transferred to the wards, the rest are currently in critical condition in the intensive care unit. As for the seriousness [of their condition], everyone's condition has improved by 'one point,'" the spokesperson said.

© Sputnik / Mariya Kritskaya
Shattered Windows, Havoc: Photos From Inside Kerch College After Deadly Blast Released
Six injured were transported to the hospital in Moscow and two more patients are set to be transferred to Moscow from Simferopol.

On October 17, an 18-year-old student started shooting and detonated a bomb in the Kerch vocational institution, where he studied himself. The attack claimed the lives of 21 people, including 16 students and 5 staff members, while over 50 were injured. After the attack, the perpetrator committed suicide inside the college library.

Number of People Killed in Kerch College Attack Rises to 20