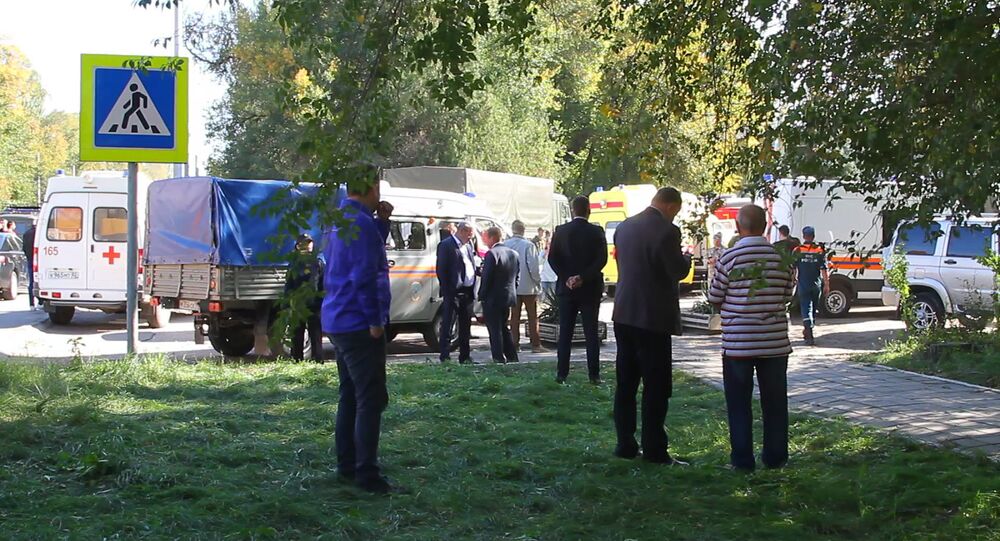 A fourth year student at a college in Kerch detonated an explosive device inside the educational institution and shot several employees and fellow students before committing suicide. The incident took the lives of 19 people and left some 50 more injured.

Sergey, a student at Kerch Polytechnic College, shared with Sputnik what he saw following the blast that rocked the college building.

"I was in another part of the building, when I heard the blast. When I went outside, I saw people running. I saw a guy with blood pouring out of his mouth. I started asking what happened, but no one told me anything," he said.

Sergey added that he saw how people were smashing windows and jumping from the second floor onto cars parked below them. He said that when he and his fellow groupmates later approached the college, they saw people lying on stretchers while others were being brought out of the building.

Another student and eyewitness, Anastasia, told Sputnik that the blast came at the end of the noon recess and was followed by shooting from an automatic weapon.

"I was near the Polytechnic College building […]. I heard the blast and then the shooting started. I couldn't understand what was going on. I was looking for my groupmates, friends, teachers to see if they are okay. Unfortunately, one of my friends was injured and she is in critical condition in the hospital now," she said.

Anastasia added that three of her groupmates were in class when the shooting started and tried to flee via the hallway, but someone shouted at them to close the door and stay where they were.

READ MORE: Nineteen People Dead, Up to 50 Injured Due to Incident in Kerch, Russia (VIDEO)

Vladimir Kireev, a political scientist, told with Sputnik about the results of his research into the available info on the perpetrator. According to him, the student was not associated with any organized group, but had his own views and ideology.

© Sputnik / Mariya Kritskaya
Witness on Kerch Blast: There Was No Central Entrance, There Were No Windows on the 1st Floor

"His views fit the ‘extremist' category. He was a supporter of the mass shooting at the US Columbine High School [in 1999]," he said.

Kireev believes that the peculiarities of modern mass culture can drive people to commit extremist acts. Another reason behind the phenomenon is the availability of weapons. He noted that the Kerch bomber hadn't been diagnosed with any psychological problems and managed to obtain a gun and commit a terrorist act.

"It is worth considering that such events in our culture are growing in scale. It's a whole new trend — readiness to commit a horrible terror act to nourish one's psychological disorders and conflicts. The means for this are easily accessible. If you think of it, you could just go outside and start killing," he said.

The political scientist noted that a new mass cultural phenomenon has emerged — people who commit terrorist acts and aggressive deeds are becoming very popular. He added that many people on social media adore the young man and what he did.

At least 19 people were killed and 50 more injured in an incident at a Kerch Polytechnic College when a student reportedly detonated a homemade explosive device and shot several college employees. It was announced by the Russian Investigative Committee that the perpetrator was fourth year college student Vladislav Roslyakov. After shooting his fellow students, the young man committed suicide. The attack is currently classified as a killing of two or more persons by generally dangerous means and not as a terrorist act.

'No Country Can Guarantee 100% Protection' – Security Expert on Kerch Incident