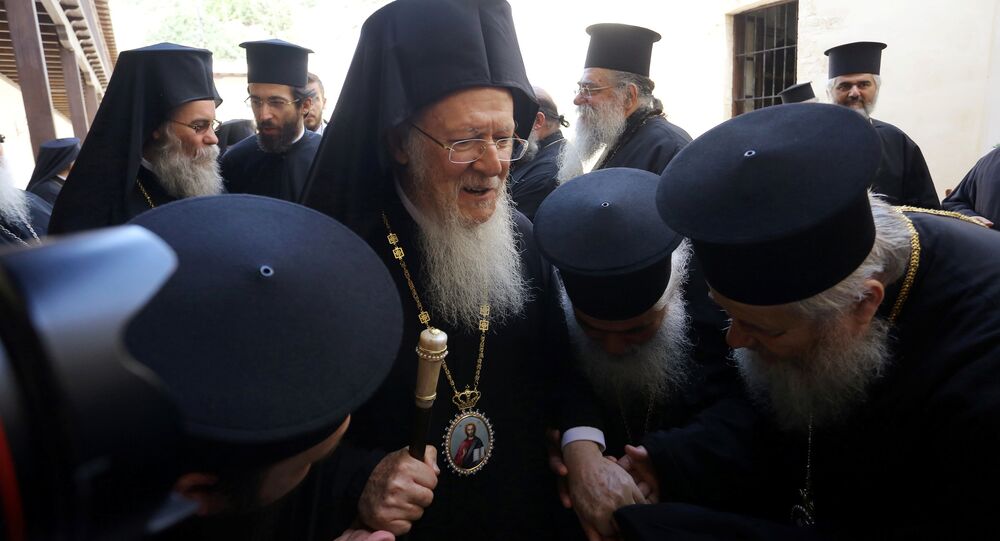 MOSCOW (Sputnik) - Ecumenical Patriarch Bartholomew of Constantinople has exceeded his authority and claims to "universal power," which is not typical for an orthodox eparch, Patriarch Kirill of Moscow and All Russia said on Tuesday.

"Today, when the Patriarch of Constantinople claims to the universal power, which is alien to an orthodox eparch, we are defending the truth and the Orthodoxy. And we will be preserving our orthodox canons, our faith," Patriarch Kirill said as quoted by the official website of the Russian Orthodox Church.

© Sputnik / Stringer
Antiochian Orthodox Church Calls Meeting on Ukrainian Push for Religious Independence
Patriarch Kirill added that he hoped that the Russian Orthodox Church's forced separation from the the Patriarchate of Constantinople over the unlawful actions in Ukraine would not last for centuries.

"Let's hope that, through the mercy of God, the Universal Orthodox Church will go through the current temptations. But our main goal is not to flinch and not to lose the purity of the Orthodoxy," Patriarch Kirill said.

He added that it was the ordinary people who currently defended the unity of the canonical church.

"I know how courageously they defend this unity, how they protect their temples… how they are fighting almost on the frontlines not just for the unity of our church, but for the purity of the Orthodoxy. It is wonderful that the entire episcopate of the Ukrainian church, united around His Beatitude Metropolitan Onufriy [of Kiev and All Ukraine], stands firm on its positions," Patriarch Kirill stated.

© CC BY-SA 3.0 / Falin / Kiev Pechersk Lavra
Ukrainian Orthodox Church Refutes Reports Alleging Autonomous Status Claims
Ukrainian President Petro Poroshenko is working to establish a single local autocephalous church in the country based on the non-canonical Ukrainian orthodox churches. In mid-September, two exarchs of the Ecumenical Patriarchate of Constantinople started working in the Ukrainian Orthodox Church of the Kiev Patriarchate (UOC-KP), which came as part of Constantinople's preparations to grant autocephaly to the UOC-KP. The initiative has been strongly criticized by the Russian Orthodox Church.