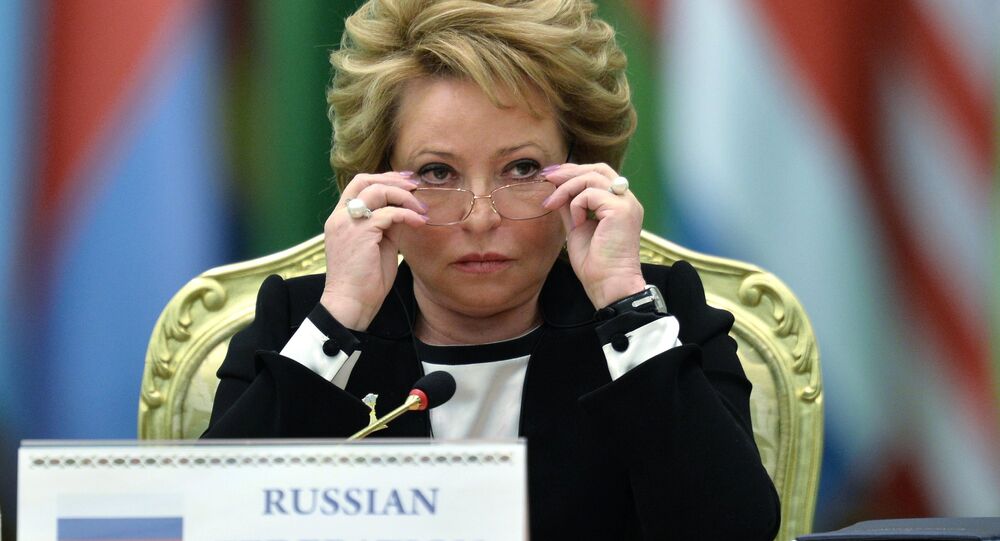 SEOUL (Sputnik) – The upper house of the Russian parliament will consider and approve the amendments on the partial decriminalization of the Criminal Code Article 282 on extremism, introduced by Russian President Vladimir Putin, in the course of four to six weeks, the speaker, Valentina Matvienko, said on Thursday.

"I am sure that we will do it very quickly because the acuity of this law in the society remains rather high. I am sure that we will adopt [the amendments] during the ongoing session. Maybe [the amendments will be approved] in one month or a month and a half, but no later than this," Matviyenko told reporters, when asked about the presidential amendments to the 282 article of the Russian Criminal Code on extremism.

"Putin introduced them in due time, he has been closely following public discussions. He has been for the first time asked a question about this during the Direct Line [annual Q&A session]," the upper house speaker added.

READ MORE: Putin on Nord Stream 2: It Would Be a Shame if EU Fails to Defend Its Interests

The president had proposed to modify the legislation because people often committed actions falling under the law unintentionally, the lawmaker suggested.

"I believe that after these amendments [are approved], this law requires constant monitoring of its use in the law enforcement practice and further development of modifications," Matviyenko argued, noting that the improvement of the expert evaluation was also required as part of this process.

On Wednesday, Russian President Vladimir Putin submitted to the State Duma a bill on decriminalizing some of the actions stipulated in the Article 282 of the Russian Criminal Code on extremism. The amendments exclude criminal conviction for one-time perpetrators whose actions did not endanger national security. According to the president's initiative, only people who were found guilty of committing felony under the article twice within one year will face criminal convictions.