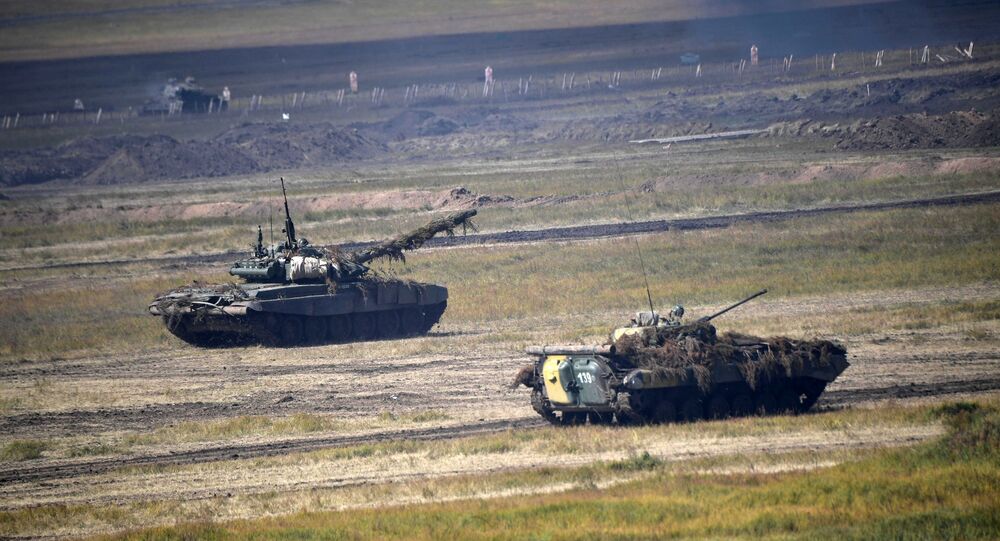 Vostok-2018, set to become the largest military exercises held by Russia in over 30 years, are scheduled for September 11-17 at five ranges in the east of Russia, and in the waters of the Sea of Japan, Bering Sea and the Sea of Okhotsk. According to previous estimates, about 300,000 troops were set to participate in the maneuvers. The drills have gained an international status, with troops from China and Mongolia set to take part in one of the stages.

"Russia is a peaceful state, we do not have and cannot have any aggressive plans," Russian President Vladimir Putin said on Thursday at the Tsugol range.

© Photo : Ministry of Defence of the Russian Federation
Russian Military Successfully Test-Fires New Interceptor Missile
However, the Russian army must be ready to protect national sovereignty and security as well as to support the country's allies, Vladimir Putin stressed.

"Our duty to our country and Motherland is to be ready to protect sovereignty, security and national interests of our country and, if needed, to support allies," Putin said.

Putin further stressed that he highly assessed the performance of the Russian army and navy in the Vostok-2018 drills.

"Today here, at the Tsugol range in the Zabaikalsky Territory, the most active stage of the [Vostok-2018] drills came to an end. You demonstrated the high-level performance. All units and formations have fulfilled the set tasks," the Russian president added.

The president also stated that the Russian army and navy had never faced such a difficult exam.

"Our army and navy have passed such a difficult and big exam for the first time… All components of the troops' combat readiness, preparedness of the management bodies, units and formations as well as the organization of their cooperation… are subjected to comprehensive checks," Putin explained.

The president went on noting that the Armed Forces will be further boosted, supplied with weapons and equipment of latest generations. Moreover, military cooperation will be further developed.

© Sputnik / Alexander Vilf
Call of Duty: Russian Army's Tough, Ultra-Secure Phone Will Make You Freak
The large-scaled Vostok-2018 war games involve troops from the Eastern and Central Military Districts, the Northern Fleet and the Airborne Troops, as well as some units from the Russian Aerospace Forces.

Earlier, the Chief of the Russian General Staff Valery Gerasimov said that the exercises were preceded by a full cycle of preparatory measures, including sudden checks, as well as command and staff training.

For example, a surprise inspection of the Northern Fleet took place in mid-August, while similar inspections of the Central and Eastern military districts happened later that month.

Russian Deputy Defense Minister Col. Gen. Alexander Fomin stressed last week that the Vostok-2018 war games are not anti-NATO event despite claims made by Western media, and that they are held several thousand kilometers away from Russia's western borders. The official noted that 91 observers from 57 countries, NATO Military Liaison Mission and EU Delegation to Russia attend the large-scaled exercises.

Vostok-2018, involving nearly 300,000 servicemen, 36,000 vehicles and over a thousand aircraft, is Russia's largest military exercise since the Zapad drills in 1981. The exercise involve Russian land, air and naval forces, while Chinese and Mongolian troops will also take part in one of its stages.