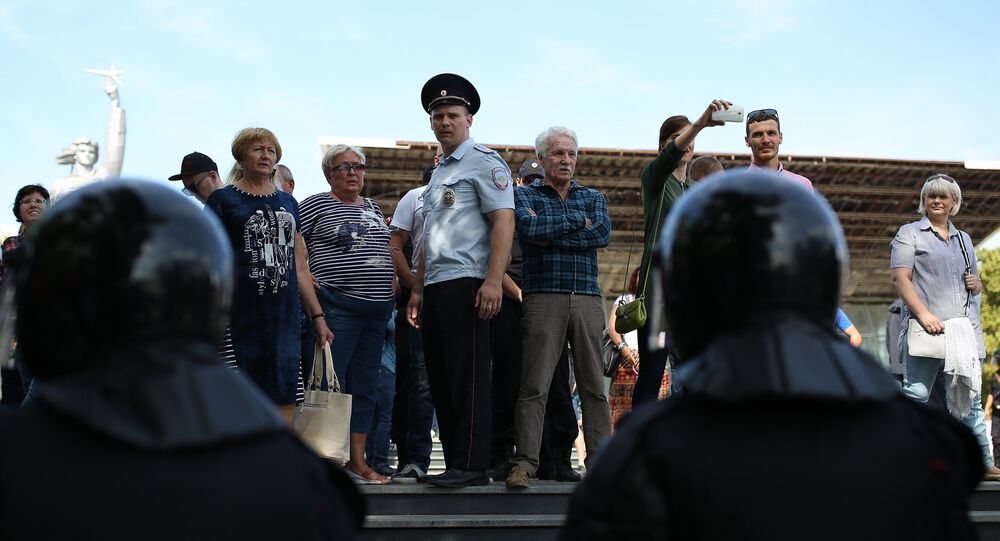 Unauthorized March Against Pension Reform is Held in Moscow (PHOTO)

On August 29, Russian President Vladimir Putin addressed the country in order to clear up the details about the upcoming pension reform and proposed some ways to soften and coordinate the legislation.

About 100 people have been detained during unauthorized rallies in Moscow and St. Petersburg, senior official of the Russian Interior Ministry Yury Valyaev told reporters.

"Some 100 people were detained in St. Petersburg and several people in Moscow. They were detained for participation in the unauthorized rallies," Valyaev said.

Approximately 30 people were arrested during the rally in the city of Yekaterinburg, according to ombudswoman of the Sverdlovsk Region Tatyana Merzlyakova.

"The rally was unauthorized, actions of its participants contradicted the legislation. About 30 people have been detained," the ombudswoman said, adding that most of the detained activists had already been released.

A rally against the retirement-age increase has been held in the center of Moscow on Sunday. The protests, triggered by the pension reform, occurred in several cities across the country, however, in the capital they were not authorized by the local government.

According to the press service for the Moscow Interior Ministry, up to 2,000 people have attended an unauthorized public event on Pushkin Square. Police and National Guard officers are securing public order and safety at the site. The demonstration is being held to coincide with mayoral elections in Moscow.

"We are following the situation," head of the Regional Security Department Vladimir Chernikov told Sputnik.

© Sputnik / Ilya Pitalev
Participants in the rally against the pension reform on Pushkin Square in Moscow.

The protesters oppose a bill, adopted in the first reading by the Russian State Duma. The legislation proposed raising the retirement age from 60 to 65 years for men and from 55 to 63 years for women. Those changes are to be implemented gradually starting from 2019. President Putin, however, proposed amendments that set the retirement age for men and women at 65 and 60 years, respectively.

Thousands Protesting in Brussels Against Increase of Retirement Age (VIDEO)