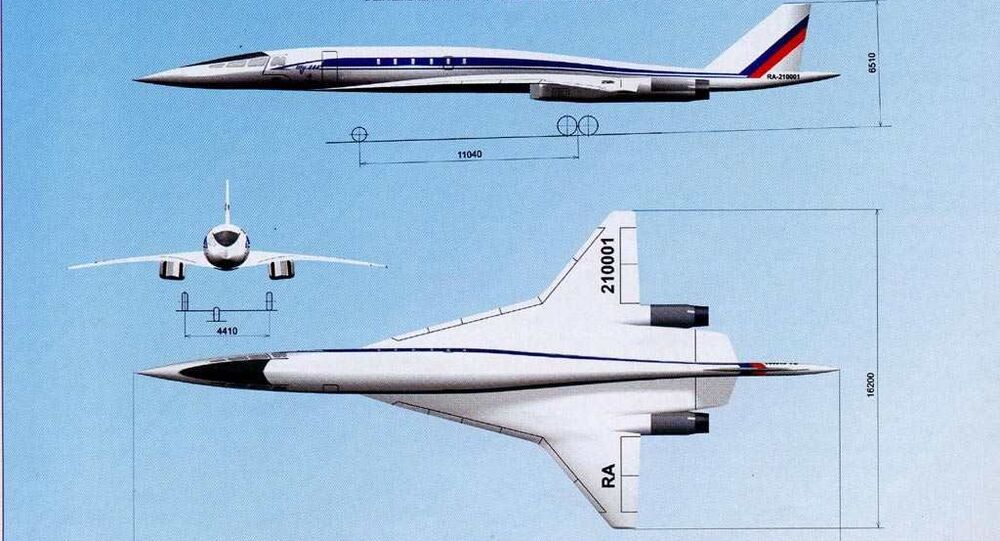 Valery Solozobov, deputy director general for design and R&D at Tupolev, has told Sputnik that the company is working on its new supersonic plane design with leading Russian scientific institutes in the fields of aircraft materials, engine design, and aero/hydrodynamics.

According to the official, further work will include studies on how to reduce sound exposure levels, practical experimentation, and construction of a demonstration aircraft for preliminary flight testing.

© Sputnik / Eugene Odinokov
New Nuclear Triad: A Look Into the Future of Russia's Strategic Defenses
"Based on the results of full-scale tests, a decision will be taken on the plane's final technical configuration," Solozobov said.

At the moment, the prospective business jet is expected to have seating capacity for about 30 passengers, a takeoff mass of 70 tons, and a flight speed ranging from Mach 1.4 to Mach 1.8 (for comparison, the Soviet Tu-144 and British-French Concorde airliners had cruising speeds of about Mach 1.6 and Mach 2, respectively).

"Considering the Tupolev Design Bureau's considerable experience in the design of supersonic long-range passenger and military aircraft, as well as the technical and technological capacity gained through the production of the Tu-160, thanks to the support of the Ministry of Industry and Trade, two basic versions [of a new aircraft] have been created – one a fixed wing and the other with variable-sweep wing design, like the Tu-160 and the Tu-22," Solozobov said.

The variable sweep wing design has tremendous potential for improving the plane's take-off and landing characteristics, the company official noted.

© Flickr / cryogenic666
Civilian Variant of the Tu-160 Bomber: Fanciful Notion or Golden Opportunity?
Asked about the new plane's expected price tag, Solozobov noted that based on preliminary estimates, in its first five years of production, the plane will cost a little more than the Tu-214, a subsonic medium-range jet airliner with a 210 passenger capacity, which had an estimated unit price of $30 million in 2017.

Earlier this year, during a visit to the Gorbunov Aviation Factory in Kazan to watch the test flight of an upgraded Tu-160 heavy supersonic strategic bomber, Russian President Vladimir Putin pondered the practicality of creating a civilian version of the Tu-160 for business travel.

Glorious Wings: the Very Best of the Tupolev Bomber Aircraft