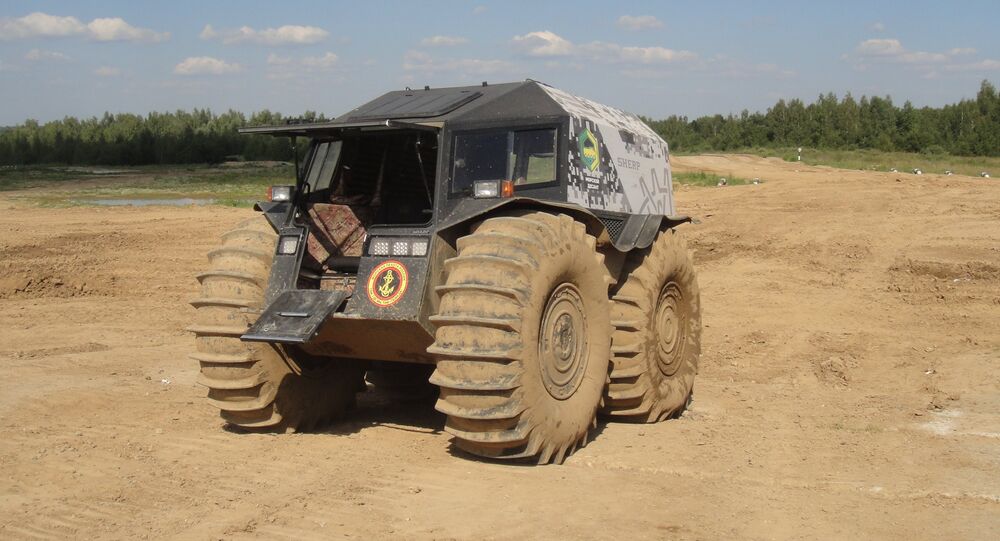 Monster trucks have been designed with racing and destruction in mind, but a Russian concept looks to assist people working in extreme environments.

Designed and built in St. Petersburg, the SHERP ATV, an all-terrain mini monster that not only dominates over rugged environments, but also plows through water, snow and ice, is a big attention grabber at an exhibition of military and dual purpose technology being held as part of the Fourth International Army Games currently underway in Alabino, near Moscow.

“The SHERP does it all: it can move over tundra, swamps, clay, and it can also tackle waterways, in a floating mode and by moving over ice,”SHERP test driver Pavel Lebeshnikov told Sputnik.

The entire concept of SHERP is focused around four huge low-pressure self-inflating tires  and paddle-like treads that propel the 11-foot-long vehicle which can climb over obstacles as tall as 27.5 inches.

On land, the massive wheels move like tank treads in that, they lock up or slow down one side to turn.

The SHERP ATV has no direct analogues in the world.

“It has a very simple design and, therefore, is reliable like a Kalashnikov rifle," Lebeshnikov said.

The SHERP ATV is powered by an indestructible Japanese-made 15.3 gallon 44 horsepower diesel engine with a guaranteed maximum speed of 7.9 mph on land and 3.7 mph in water and has an endurance of up to 620 miles.

The SHERP ATVs have been mass-produced since2015.

Last summer, three conventional and one (10-wheel) pilot modification made easy work of a very challenging 10,000 km trip along the Arctic Circle from Arkhangelsk in northern Russia  all the way to Petropavlosvk-Kamchatsky in the Russian Far East.

“Our vehicle can work in any climate. We have ten tropical versions currently in use in Africa. All we did was to change the cooling system a bit, that’s all,” Lebeshnikov continued.

The Russian super off-roader’s unique capabilities have won it a great deal of attention abroad.

“We now have offices in the United States, Canada, a number of Latin American countries and also in Poland and Lithuania.  We also have dealerships around the world selling each unit at between $97,700 and$107,160 apiece,” Pavel Lebeshnikov noted.

“But one of the SHERP’s big fortes is that it is cheap to use and has a very simple construction,” he emphasized.