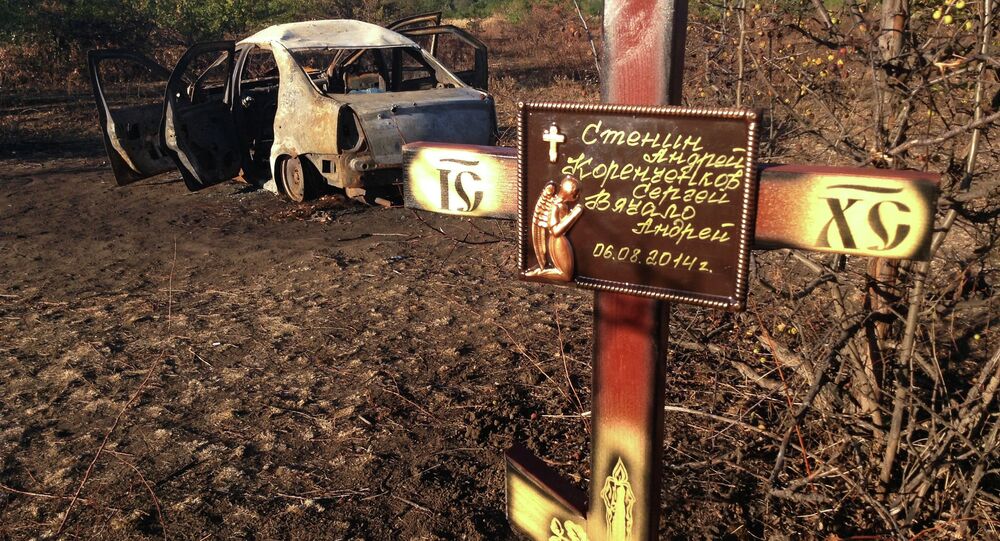 It has been four years to the day since Sputnik photojournalist Andrei Stenin was killed while covering the bloody events of the conflict in Donbass.

In early August 2014, there were fierce firefights going on between the militia of the self-proclaimed Donetsk People's Republic and Kiev’s forces and affiliated nationalist battalions.

The events developed very rapidly that summer, with some territories trading hands several times a day.

© Sputnik / Damir Bulatov
Memorial Service for Slain Rossiya Segodnya Photojournalist Stenin Held in Donbass
In early August, Sputnik photo correspondent Andrei Stenin was in Donetsk and planned a trip to the town of Snezhnoye, where fighting was in full swing, with Kiev forces using artillery, tanks and rocket launcher systems against pro-independence militia.

"We saw Andrei the day he left; he said he was going to Snezhnoye. What he wanted to photograph there I do not know. He didn’t say much about his plans. I remember the car he got in, it was a blue Renault Logan… He got in and they left,” one of Stenin’s colleagues, Alexander, said.

He Often Disappeared, But Always Came Back

After some time, Stenin stopped communicating and the events unfolding near Snezhnoye inspired little optimism. The news that contact with one of the photojournalists had been lost quickly spread among journalists working in Donbass.

He didn’t know everybody – the specifics of a photojournalist's work are somewhat different from what writers and filmmakers normally do. Those who knew Andrei still tried not to panic.

“He often disappeared, but always came back. Anything could happen: he could have no way to move out or have found an interesting topic that he has to put on film. The battery in his phone is dead and there is no way to recharge,” were thoughts that Stenin’s colleagues had, seeking to calm themselves.

Meanwhile, some people started saying that Stenin could have been taken prisoner by Ukrainian forces – such things often happened.

Stenin’s name could be heard in high places and mentioned by websites worldwide. International officials joined their Russian colleagues’ calls for Stenin’s release, but there was no word about Andrei’s whereabouts.

August 6, 2014 is the officially recognized date of Andrei Stenin's death. However, four years ago, people still hoped that he would return.

It wasn’t until August 20 that the terrible news finally arrived about a burned-out car, just like the one Andrei took when he left Donetsk, found in the vicinity of the town of Snezhnoye. Journalists found about 20 burned-out cars lying on the roadside.

"Some of them were crushed by a tank, some of them had human remains inside, we saw a GAZelle minibus torn apart, burning,” Alexander recalled.

Not far from it there was another car, riddled with bullets, with the bodies of three people still inside.

"We approached the Logan and saw the remains of three people inside and what was left of the lenses in the trunk. Andrei's shirt and a disposable syringe with anti-shock lay near Andrei's car. The car had been searched, along with those who were inside, and then burned,” Alexander continued.

Judging by available details, the journalists were able to recreate a picture of what had happened. The journalists had left Snezhnoye for Dimitrovka; they returned in the evening, taking a different route and came under small-arms fire.

The driver was apparently looking for cover away from the line of fire. The car swerved right, drove into a ditch and for some time was moving parallel to the road. However, no matter how much he tried, the journalists had no chances of survival when their unarmored car came under fire.

Four years later, few traces of what once happened here still remain. Craters from explosions, once dotting the area, are hardly visible now and, trees have grown taller.

The earth mound to the east of the wooden cross which once served as a rampart, has become overgrown with with grass and the walls of trenches and dugouts have begun to crumble.

Where the burned-out car once stood, there is a cross with bearing the names of the fallen journalists.

A local school now bears the name of Andrei Stenin, who was the fourth journalist to die in Donbass in 2014. Since then, much has changed when it comes to ensuring the security of media representatives and the general situation in the region.

Chances of being ambushed by Kiev forces are slim, a clear line of disengagement has appeared and dangerous areas are well- known.

Still, despite all the efforts to protect journalists, even now unarmed people wearing vests with the inscription "Press” are dying while performing their duties as journalists.