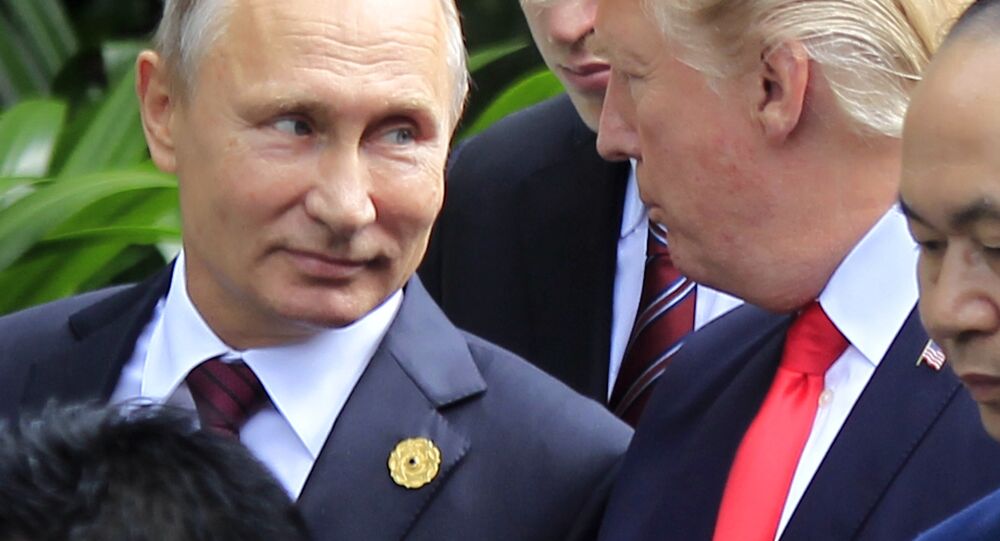 MOSCOW (Sputnik) - Moscow hopes that the upcoming summit of the Russian and US presidents in Helsinki will allow to take a step away from the current crisis in bilateral relations, Kremlin spokesman Dmitry Peskov told RT broadcaster in an interview.

Russian President Vladimir Putin and US President Donald Trump are expected to meet in the Finnish capital on July 16 to discuss bilateral ties and various issues on the international agenda. The summit will be their first full-fledged meeting since Trump took office in January 2017.

© Sputnik / Michael Klimentyev
Trump, Putin to Have 1st Full-Fledged Summit in Attempt to Heal Breaches in Ties
According to Peskov, Russia is not taken aback by the principle proclaimed by Trump stating that the US interests have a primary importance for Washington.

"This principle is relevant for any head of state, because any head of state in contacts with foreign counterparts primarily defends the interests of his own country, and in this respect our president is very pragmatic, open and very consistent, he always says that the interests of Russia and the Russian people are the most important for him, and therefore he respects the fact that his worldview is being similarly shared by Donald Trump in relation to his country," Peskov said.

"Another thing is that such an approach is viable only in combination with another postulate — when such an approach is based on a commitment to developing mutually beneficial cooperation taking into account each other's interests. This all together can give certain prerequisites for the development of cooperation," the spokesman added.

"NATO is an instrument of confrontation, which was created and developed for confrontation. And this initial purpose of the alliance remains in place. That is why when the alliance, which openly considers Russia as a potential adversary, increases its budget this shows that Russia has to stay vigilant, and Russia is staying vigilant," Peskov said.

Kremlin spokesman also noted that Moscow was puzzled with many aspects of investigations being conducted in Washington into Russia's alleged involvement in US affairs.

© REUTERS / Steffen Kugler
Trump, Putin Likely to Agree on General Principles in Syria - Trump's Ex-Mideast Adviser
The spokesman said that the Russian and US presidents respect each other and Moscow hopes that there will be a meaningful dialogue at the Helsinki summit.

"[Trump] previously maintained contacts with President Putin, they respect each other and they are quite good at talking, although previously they had very short opportunities for communication. This time we are counting on a more meaningful conversation," Peskov said.

Russian President Vladimir Putin and Trump are expected to meet in the Finnish capital on July 16 to discuss bilateral ties and various issues on the international agenda. The summit will be their first full-fledged meeting since Trump took office in January 2017.