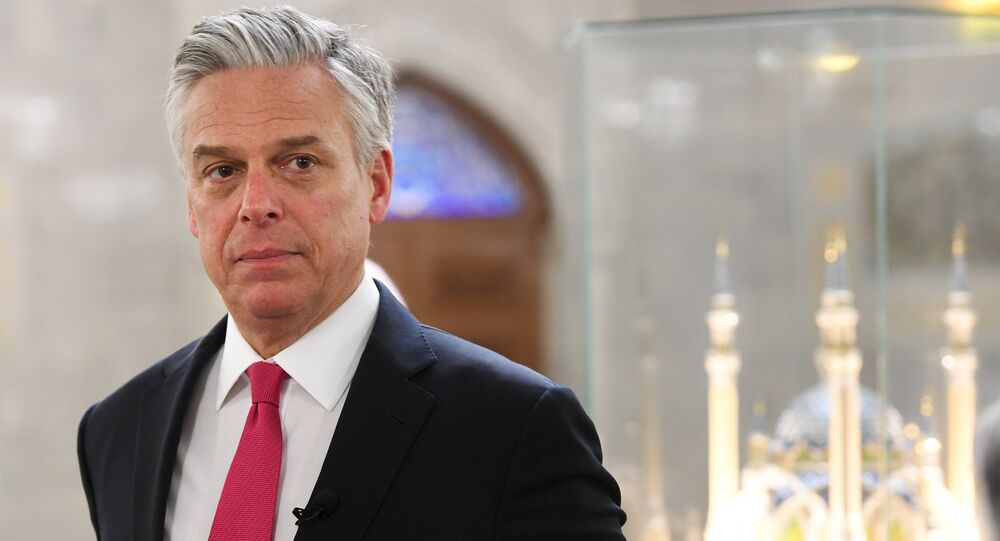 MOSCOW (Sputnik) - Space exploration and children’s health are vital issues that unite Russia and the United States and promote collaboration between the two countries, US Ambassador Jon Huntsman said in a letter to the founder and president of Russia’s Unity movement Alena Kuzmenko.

The Victory spacesuit, hand-painted by cancer patients in Russia and the United States, was showcased at Huntsman’s residence in Moscow amid US Independence Day celebrations. The presentation of the spacesuit was arranged thanks to the support of the NASA office in Russia.

"Thank you for attending and displaying the wonderful Victory spacesuit. It was a highlight of the event, showing cooperation between the United States and Russia, and much appreciated by my family and our guests," Huntsman said in the letter. "The themes of space exploration and children’s health are of vital interest, and unite our countries."

The Victory space suit was sent to the International Space Station in 2017, while Russian cosmonaut and the commander of Expedition 53/54 Alexander Misurkin dedicated his spacewalk to the project.

The cancer patients from some ten pediatric cancer hospitals in Russia and the United States painted the pieces for the Victory spacesuit together with Russian cosmonauts and US astronauts as a part of the Space Suit Art Project, which is supported by Russia's state space corporation Roscosmos, NASA and other international space agencies.

The Victory spacesuit, manufactured by Russia’s Research and Development Production Enterprise Zvezda, is the fifth spacesuit created by the project, and is the first spacesuit initiated by Russia. The other four space suits all carry symbolic names — Unity, Hope and Courage, and Exploration.

The Space Suit Art Project was launched by US Astronaut Nicole Stott and director of the Arts in Medicine Program at the University of Texas MD Anderson Cancer Center Ian Cion to demonstrate the benefits of arts and science to adults and children fighting cancer.

© REUTERS / Greg Shirah
NASA May Have Destroyed Evidence for Organics on Mars 40 Years Ago
The project, developed globally by the Space For Art Foundation, has grown to include the International Space Station partner countries.

In Russia, the Space Suit Art Project is developed by Unity, and organization that supports cancer patients, which is an official partner of the Space for Art Foundation. Work is done in collaboration with Roscosmos, Zvezda, MRI-Expert chain of diagnostic centers and bank for SMEs Modulbank.