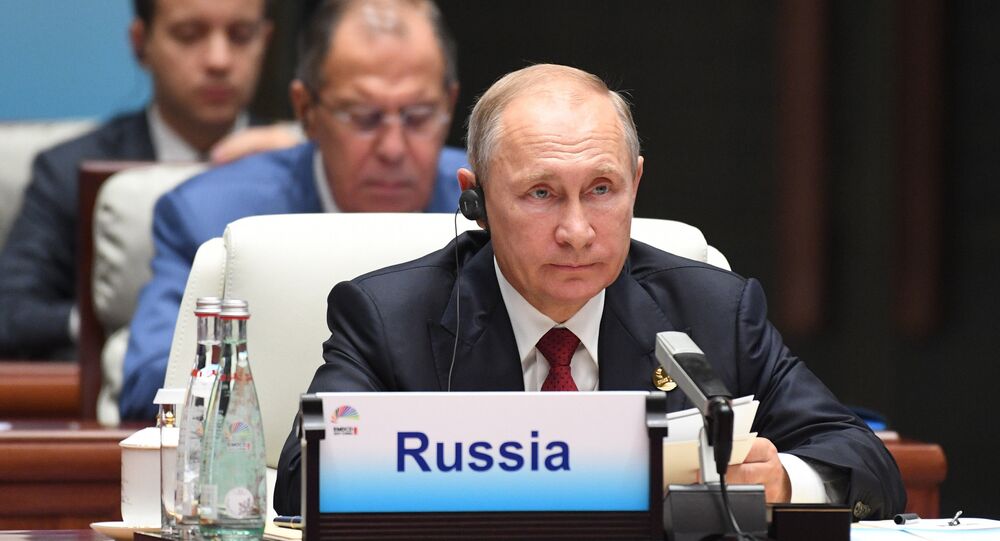 Russia, as a country respecting the principles of international law and interests of its partners, will pay serious attention to the state's representation on the international arena and respect for its own interests, Russian President Vladimir Putin said in an interview with the China Media Group.

"We will pay special attention to our representation on the international arena as a country which abides by the principles of international law, respects the interests of our partners and strives for respect for our own interests," Putin said.

Putin added that in that regard Russia attached great importance to cooperation with reliable partners such as China.

© Sputnik / Sergey Guneev
Beijing Praises Putin's Estimation of Russia-China Relations
Morevover, In the interview with the China Media Group Vladimir Putin spoke of the priorities of the Russian state, among which he mentioned economic growth, the introduction of innovations in the economy, security as well as the development of infrastructure, health care and education.

Russia cannot have any other goal apart from the improvement of the lives of the Russian citizens, which forms the basis of its relations with other states, in particular, China, Russian President Vladimir Putin said.

Putin recalled that Chinese President Xi Jinping, at the last congress of the Communist Party of China (CPC), outlined the state's main goal as "desire to improve lives of people."

"What's the most important part of the speech delivered by President Xi Jinping to the 19th National Congress of the Communist Party of China? What did the president talk about? That's improving the lives of the people. There are many different ways to attain that goal, but the goal remains the same. For Russia, besides improving the living standards of our citizens, we don't have any other goals," Putin said said in an interview with the China Media Group issued on its website.

© Sputnik / Bolat Shaikhinov
Scholar Sees ‘Obvious Tendency’ of US Trying to ‘Contain, Oust’ Russia and China
The Russian president emphasized that with this objective in mind the Russian leadership had been building relationship with China.

"Based on this, we are also considering how to construct Russia-China relations, how to fulfill these goals and ensure national security and how to strengthen the effort to build the new economy especially in terms of modern innovation, digital economy, gene technology, modern harmonious society and the governance of the country and its economy. So we share many similarities and I believe any efforts will lead to new progress," Putin said.

The Russian president has also pointed at the deep historical ties of Russia and China, which, according to him, determine the common approaches of the two states toward domestic policies and their peoples.

Vladimir Putin has underlined on numerous occasions, including during his inauguration speech, that the prosperity and the peaceful future of the Russian people were the main goals of his life and his work.

© REUTERS / Madoka Ikegami/Pool
China-Russia Trade May Exceed $100Bln Due to Russian Economy's Recovery - China
In recent years, the level of cooperation between Russia and China has drastically increased, particularly in the spheres of defense, energy and economy. Russia and China officially identify the current bilateral relations as an all-round, equitable and trusting partnership, and strategic cooperation.

Russian president is set to visit China on June 8-10. During his visit he is expected to hold talks with Chinese leader and take part in the summit of the leaders of the Shanghai Cooperation Organisation member states.