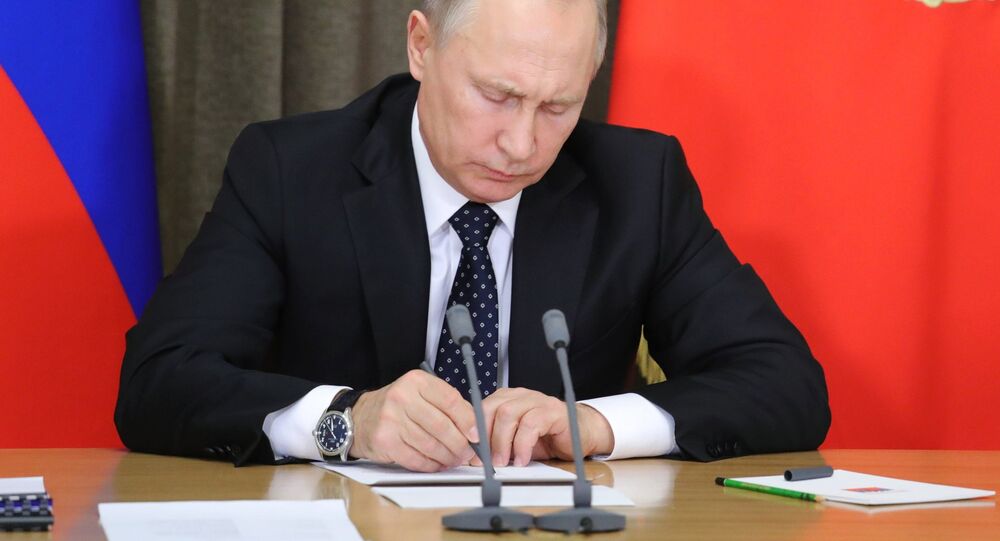 Putin Signs Bill on Countermeasures Against US, Its Allies

Russian president Vladimir Putin has signed a bill on countermeasures against the United States and its allies.

The law enters into force on the day it is published.

The bill was passed by the Russian Lower House in May. The goal of the legislation is to defend Russia's sovereignty from "unfriendly actions" by Washington and other foreign states that have imposed political and economic sanctions on Moscow.

© AP Photo / Ronald Zak
Iran Asks OPEC Support Amid US Sanctions
The government may forbid the import of any items under the orders of the president, but the list of vetoed goods cannot include critically important products if no similar items are produced in Russia. The government has to determine the list of forbidden items.

The law also allows for a temporary or definitive end to the cooperation with the countries or entities that have engaged in unfriendly actions toward Russia.

On April 6, Washington unveiled new sanctions on Russia over what it described as "global destabilization efforts." The sanctions list included senior government officials, and lawmakers, as well as major business owners and private and state-owned companies under their control.

© AP Photo / Jorge Silva/Pool Photo
US Side Shows Lack of Initiative in Organizing Trump-Putin Meeting – Kremlin
In response, Russian Prime Minister Dmitry Medvedev said that Moscow reserves the right to respond to the new US anti-Russia sanctions and may review trade deals.

The Russian Embassy in the United States said that the new package of sanctions is another hit to bilateral relations, adding that the sanctions will hurt thousands of Russian citizens who are part of the businesses that were targeted.