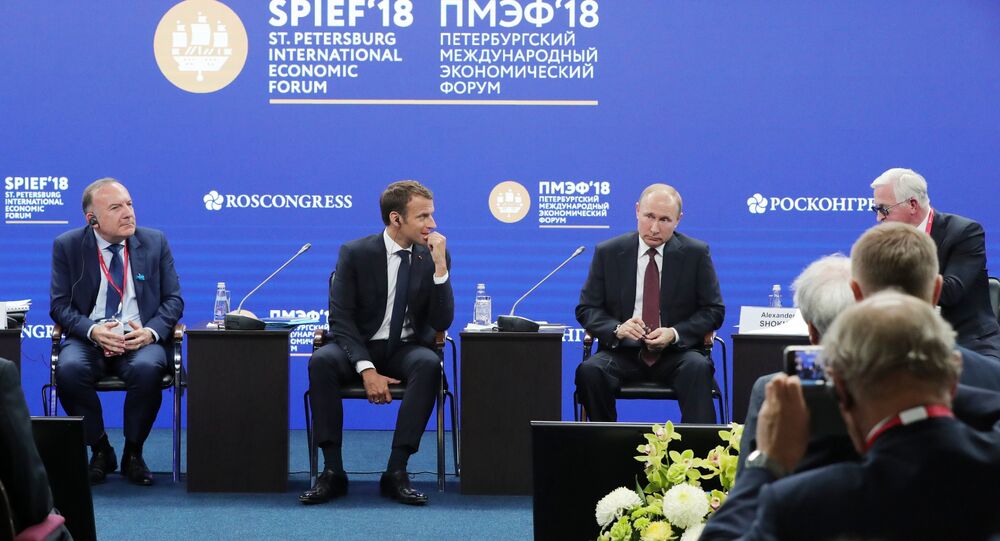 ST PETERSBURG (Sputnik) - Russian President Vladimir Putin on Friday took part in a plenary session of the St. Petersburg International Economic Forum (SPIEF), during which he spoke on challenges of the world economy, as well as key foreign policy issues.

SPIEF, held annually in Russia's second largest city of St. Petersburg, is a major global platform for communication between business representatives and the discussion of crucial economic issues. The forum’s theme this year is Creating an Economy of Trust. The event started on Thursday and will continue through Saturday. Rossiya Segodnya International Information Agency is the official media partner of the forum.

Protectionism, Sanctions May Throw Global Economy Back to Subsistence Farming

According to Putin, the international political and economic system is currently undergoing a major strength test, as the "spiral of sanctions is widening" and new forms of protectionism are being implemented, which all calls into question the prospects for global growth.

"Today we are witnessing not even erosion – and I say this with regret – but the undermining of these foundations. The system of multilateral cooperation that was built for decades is being crudely destroyed instead of undergoing natural and needed evolution. Violating rules is becoming a rule. Open markets and fair competition are gradually replaced by all kinds of exemptions, restrictions and sanctions," he noted.

© Sputnik / Сергей Гунеев
France Recognizes Russia's New Role in International Relations - Macron (VIDEO)
The world is facing a new kind of protectionism, which is being justified by far-fetched references to national security, while in reality is aimed at suppressing competition and extorting concessions, Putin noted.

According to the president, such arbitrariness leads to global distrust, which endangers global production chains and economic growth and may throw the world economy back into the past, provoking a "system-wide crisis."

"Global mistrust is calling into question the prospects of global growth. The logic of economic egotism does not fit in well with the current specialization of countries and companies and the building of complicated global production chains. In effect, this may throw the global economy and trade far back into the past, into the era of subsistence farming when every household had to produce everything itself," he pointed out.

© Sputnik / Maksim Blinov
Russia to Continue Ensuring Economic Growth - Putin
Putin also touched upon the World Trade Organization (WTO)’s role, which, despite all flaws, remains a key element in the global trade system. According to the president, giving up on the WTO system without any viable substitute would mean "destroying the established balance" and a venue for resolving disputes, which would lead to a situation when "Force alone will decide who is right."

Putin stressed that the world needed "a full-scale trade peace" rather than trade wars or even temporary trade armistices.

"The theme of this year’s St. Petersburg forum is Creating an Economy of Trust. I am convinced that experience shows that the role of trust as a factor of development will grow … Russia favors trade freedom, economic integration, and constructive partner-to-partner dialogue and calls on our partners from Europe, from America, from Asia and other regions to advance together towards the sustainable development goals," he concluded.

'Not All Is Lost' With Iran Nuclear Deal

During the session, Putin also dwelt on such foreign policy issues as the ramifications of the US withdrawal from the 2015 Iran nuclear deal, relations with Washington and the 2014 Malaysian Airlines MH17 catastrophe in Ukraine.

Putin recalled that the IAEA confirmed Tehran’s full compliance with the 2015 nuclear deal and there were no grounds to "punish" the country, stressing that the disruption of the deal, Iran’s withdrawal, would result in international community losing credible verification control of the country’s nuclear program.

© AFP 2021 / ATTA KENARE
Kremlin Underlines Importance of Iran’s Reaction to US Plan on Nuclear Deal
"Will it be better for Israel if Iran withdraws from this deal or is forced out of the deal? Then Iran's nuclear activities will not be understood by anyone. We will not know what is happening there, what risks will arise then," Putin said.

According to Putin, not all is lost with the issue of the Iran nuclear deal after Washington’s pullout.

"There is no need to excessively fuel the existing tensions if we want to preserve something. The doors for negotiations and for the final result should remain open. I believe that all is not lost … There are a lot of things he [US President Donald Trump] is not satisfied with [in the deal], but in general, he does not rule out reaching agreements with Iran," Putin concluded.

Russia cannot be satisfied with the current level and nature of relations with the United States, and Moscow is ready for dialogue, Putin said, while commenting on relations with Washington.

© AP Photo / Jorge Silva/Pool Photo
'We Are Hostages of Internal US Problems': Putin Hopes to Mend US-Russia Ties - Reports
"We, of course, cannot be satisfied with the level and nature of Russian-American relations, we are ready for this dialogue … Mr. Trump proposed holding a meeting, but so far we have not had such an opportunity, but we are ready for this dialogue… I think that it is long overdue," Putin noted.

He also stressed the need to agree on "unified principles of conduct" with the United States, noting that force as the only element in international relations could only lead to a tragedy.

No Russia's Involvement In MH17 Catastrophe in Ukrainian Skies

During the session, Putin also strongly dismissed the conclusions of the Dutch-led Joint Investigation Team's (JIT) that the projectile which had downed MH17 had originated from a Buk missile system belonging to the Russian Armed Forces.

"No, of course, not," Putin said, when asked whether it was a Russian missile that had downed the Boeing plane.

© REUTERS / Francois Lenoir
It Was 'Certainly' Not Russian Missile That Downed MH17 - Putin
He expressed regret that Russia was not allowed to investigate the MH17 crash in eastern Ukraine, stressing that Moscow could only recognize the results of the investigation if it took part in the probe.

Putin noted that there were many versions of what had happened while the international investigation did not take them into account.

He also pointed out that Ukraine had strictly violated its obligations by not closing the airspace over the territory where hostilities had been in place.

A Malaysian Airlines Boeing 777 crashed in eastern Ukraine in July 2014 while flying to Kuala Lumpur from Amsterdam. All 298 passengers and crew on board the aircraft died.

The JIT, made up of Australia, Belgium, Malaysia, the Netherlands, and Ukraine, tasked with probing the crash, found that the airliner was downed by a Buk missile system, which was allegedly brought from Russia and returned there after the crash.

© REUTERS / Maxim Zmeyev
Russian FM: US Never Released Satellite Images Related to MH17 Crash in Ukraine
However, Russia's Almaz-Antey rejected the findings, saying that three simulations, held by it, showed that the missile was launched from the Zaroshchens'ke area, which was controlled by the Ukrainian army at the time of the crash.

The Russian Defense Ministry said that not a single Russian air defense system had ever crossed the Russian-Ukrainian border. According to the ministry, Russia has provided the JIT with exhaustive evidence which points to the involvement of Ukrainian Buk systems in the MH17 crash.