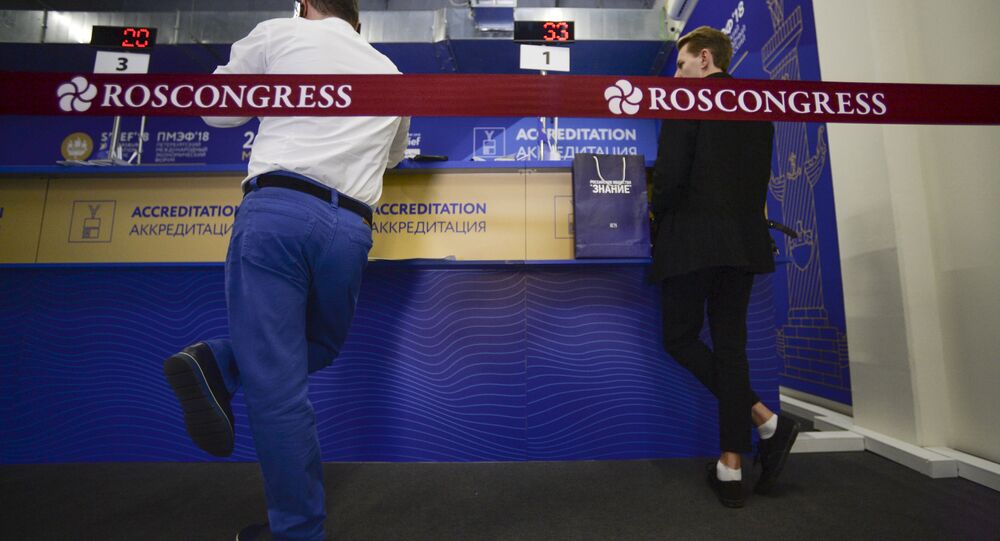 MOSCOW (Sputnik) - Foreign investors will discuss the fact that Russia's economic isolation was not achieved as expected by the architects of the sanctions at a meeting with Vladimir Putin at the upcoming St. Petersburg International Economic Forum (SPIEF), the CEO of the Russian Direct Investment Fund (RDIF), Kirill Dmitriev, said on Monday.

"The foreign guests will discuss with Putin that Russia secured a good macroeconomic position and that they have successfully invested in Russia. The assumptions that the Russian economy will be isolated were proven incorrect," Dmitriev told reporters.

Dmitriev went on saying that geopolitical factor could not be ignored in investment planning, as it could create additional risks.

© Sputnik / Natalia Seliverstova
German MP Slams US Anti-Russia Sanctions as 'Part of Trade War'
SPIEF, held annually in Russia's second largest city of St. Petersburg, is a major global platform for communication between business representatives and the discussion of crucial economic issues. This year's event will take place on May 24-26. Rossiya Segodnya International Information Agency is the official media partner of the forum. The RDIF traditionally organizes a meeting with the world leading investors and sovereign funds on SPIEF sidelines. This year, some 40 heads of major investment funds from 20 states totaling over $13.5 billion of assets under management are expected to attend.

Dmitriev said that the fund and its partners plan to make investments worth over 1.5 trillion rubles (over $24 billion) in the next two years despite a potential strengthening of anti-Moscow sanction.

"We have already invested 1.2 trillion rubles in over 50 projects. In the next two years we are planning to invest more than 1.5 trillion rubles or in fact to double the existing level of invested funds," Dmitriev told reporters.

READ MORE: RDIF May Claim Compensation for Misleading Statements in US Media

The official specified that the fund had already attracted $40 billion to the joint funds with the leading partners.

According to Dmitriev, RIDF to make a number of major deals, including with the French businesses at the upcoming forum.

"At the forum, we will make an announcement about 10 investments in various industrial sectors: infrastructure, hi-tech, agriculture, chemical industry, biotechnology, energy, financial sector and logistics… We will also announce a large number of deals with France within the framework of the strategy on the support of small and medium business," Dmitriev told reporters.

Moreover, the Russia-Japan Investment Fund, launched in September 2017, will also report about the bilateral agreements, according to the executive.

The joint technological platform between Russia and the United Arab Emirates (UAE) will also announce its first deal on a transport aggregator for cargo transportation, Dmitriev said.

Among other investment deals, RDIF cooperation with Saudi Arabia is a separate case.

"We have very close relations with Saudi Arabia, as you know, we created a joint energy fund with Saudi Aramco, so, Saudi Industry and Energy Minister Khalid Falih will come to the forum. We have a number of important discussions about how to increase investments of this energy fund and how to expand investment cooperation in the energy sector," Dmitriev said.

© REUTERS / Hamad I Mohammed
Russia's RDIF Signs Memorandum on Petrochemistry Cooperation With Sibur, Saudi Aramco
In February, Dmitriev said that the joint fund of RDIF, Saudi Arabia's Public Investment Fund (PIF) and Saudi Aramco had invested more than $1 billion in oilfield services provider Eurasia Drilling Company (EDC), oilfield equipment manufacturer Novomet and in the joint project with Russia's Sibur in Saudi Arabia. All these deals will be completed in the near future.

RDIF May Claim Compensation for Misleading Statements in US Media

Russia's RDIF to Cooperate on Petrochemistry With Sibur, Saudi Aramco