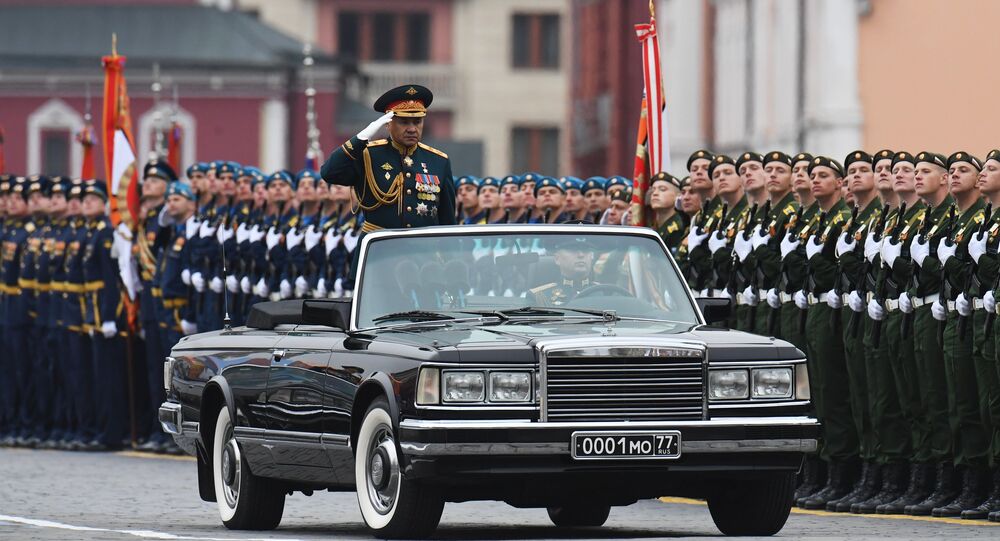 MOSCOW (Sputnik) - On Wednesday, May 9, Russia is marking the 73rd anniversary of the victory over Nazi Germany in the Great Patriotic War of 1941-1945.

The Great Patriotic War was a crucial part of World War II (1939-1945). It began on June 22, 1941, when Germany launched an attack on the Soviet Union in violation of all prevailing treaties. Germany's allies in the war were Romania, Italy, Slovakia, which joined the war on June 23, Finland (June 25), Hungary (June 27) and Norway (August 16).

The Great Patriotic War lasted nearly four years and was the largest armed confrontation in history. Between 8 million and 13 million people simultaneously fought in different periods of the war over an area that stretched from the Barents Sea in the north to the Black Sea in the south. The confronting armies had between 6,000 and 20,000 tanks and assault guns, between 85,000 and 165,000 pieces of artillery and mortars, and between 7,000 and 19,000 aircraft.

The Blitzkrieg, or the "lightning war," that was planned by Germany to defeat the Soviet Union within a few months, went awry almost immediately in 1941. The staunch defense of Leningrad (now St. Petersburg), the Arctic region, Kiev, Odessa and Sevastopol, as well as the battle of Smolensk, rendered the Blitzkrieg plans obsolete.

The Soviet army stood its ground, eventually pushing the enemy back, defeating Nazi troops near Moscow, Stalingrad (now Volgograd) and Leningrad, as well as in the Caucasus, in the Battle of Kursk, in Ukraine on the right (West) bank of the Dnieper River, in Belarus, and during the Jassy-Kishinev and Vistula-Oder Offensives and the Battle of Berlin.

During the war, the Soviet army routed 607 Axis divisions. The German army and its allies lost over 8.6 million military personnel on the Eastern Front, and over three-fourths of their weapons were destroyed or captured.

The Soviet Union won the war but the victory exacted a huge toll on the population, with nearly every Soviet family losing loved ones. Germany signed an Act of Unconditional Surrender in a suburb of Berlin in the late evening of May 8, 1945 (already May 9 according to Moscow time).

The decree also made May 9 a public holiday, granting workers a day off.

On May 9, 1945, people across the Soviet Union celebrated the Victory Day with parades, dancing and singing. Amateur groups, popular film and theater actors and orchestras performed in squares and parks. That evening, people listened to a radio address by Soviet leader Joseph Stalin followed by an impressive display of fireworks that consisted of 30 shots from 1,000 artillery guns. Afterwards, dozens of aircraft fired rockets that formed garlands of multicolored lights over Moscow. People in many squares across the country lit sparklers.

READ MORE: Top 6 Premieres at the 2018 Moscow Victory Day Parade to Watch Out For

In December 1947, the Supreme Soviet's Presidium decreed that May 9 should be a working day, effectively canceling the Victory Day celebrations in 1948. It was only on April 26, 1965, twenty years after the victory, that they were resumed. The Presidium of the Supreme Soviet, the central governing body of the USSR, made it a non-working public holiday and established a special jubilee medal.

© Sputnik / Ilya Pitalev
WATCH Final Rehearsal of Victory Day Parade in Russian Capital
The first May 9 military parade was held on Red Square in 1965. The units marching at the forefront bore the historic Victory Banner, which was raised by the Soviet troops in Berlin in May 1945.

The May 9 military parades were later held in many other Soviet cities. Until 1995, military parades in Moscow's Red Square were only held in jubilee years – 1965, 1985 and 1990. The May 9, 1995 the military parade was designed to resemble the historic Victory Parade of 1945 and featured war veterans, home front workers and Moscow Garrison troops. The Victory Banner was carried in front of the troops.

On April 15, 1996, the Russian president signed an executive order instructing that the historic Victory Banner be carried alongside the flag of the Russian Federation during the wreath laying ceremony at the Tomb of the Unknown Soldier during Victory Day ceremonies and parades of troops and war veterans in Moscow's Red Square.

In 2016, the May 9 parades all across Russia honored the 71st anniversary of the victory over Nazi Germany. The parade in Moscow alone involved about 10,000 servicemen, 135 units of military equipment and 71 aircraft.

A military parade to honor the 72nd anniversary of the Victory over Nazi Germany involved about 10,000 troops and 114 units of military equipment, however due to unfavorable weather conditions in the Moscow region it was decided to cancel the air show at the 2017 Victory Day Parade.