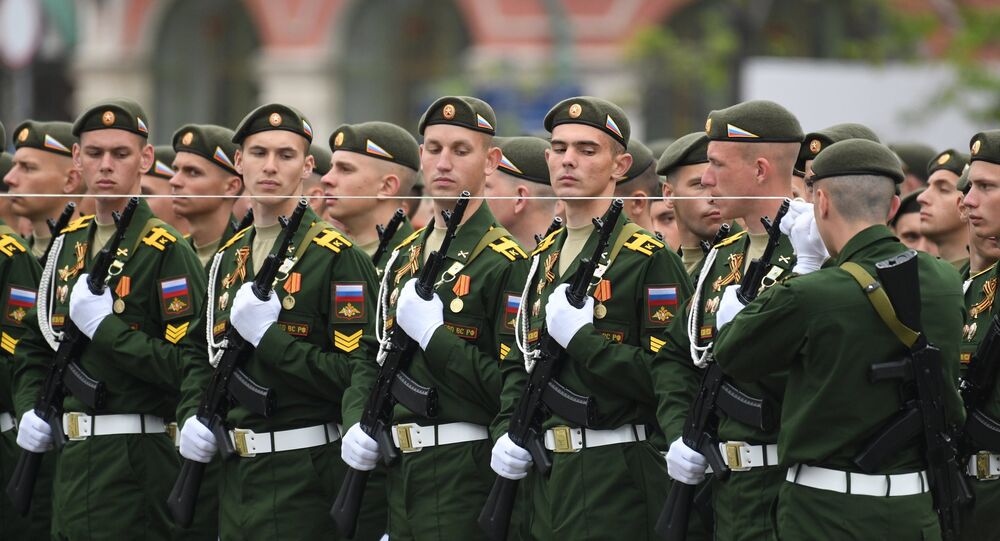 MOSCOW (Sputnik) - A military parade to honor the 73rd anniversary of the end of the Great Patriotic War will start on Moscow's Red Square on Wednesday at 10:00 a.m. local time (07:00 GMT).

The march will be broadcast live on Russian television channels. Access to the Red Square will be restricted, with only invitees, including war veterans, officials and reporters, allowed to have first-row seats for the spectacle.

Servicemen of the 154th Preobrazhensky Independent Commandant's Regiment will bring the national flag of Russia and the victory banner of the Great Patriotic War onto the Red Square. The procession will be commanded by Russia’s Ground Forces Commander Col. Gen. Oleg Salyukov. Defense Minister Sergei Shoigu will be the parade inspector.

The parade will consist of three major parts – the infantry march, the procession of armored vehicles and a fly past column, involving military helicopters and airplanes.

After making a tour around the troops on an executive car ZiL, Shoigu will report to President and Supreme Commander-in-Chief of the Russian Armed Forces Vladimir Putin on readiness of the troops. The supreme commander-in-chief will make a solemn speech and announce a minute of silence. After that, a solemn march will begin on the country's main square.

© Sputnik / Vladimir Astapkovich
Five Things You Should Know About Victory Day Parade in Moscow
According to Shoigu, 13,000 people, 159 units of equipment and 75 aircraft would take part in the parade this year.

"A total of 33 parade units of the dismounted column include officers, sergeants and soldiers of formations and military units, student officers and cadets of military educational institutions, pupils of Suvorov and Nakhimov schools of the Russian Defense Ministry, members of the Yunarmiya military patriotic social movement, servicewomen," the Defense Ministry said.

Personnel of the Ministry of Emergency Situations, the National Guard of Russia, the Federal Security Service and the troops will march across the square.

The armored vehicles part will traditionally begin with the procession of the legendary WWII-time T-34 tank, followed by the modernized Tigr armored cars, fitted with Arbalet and Kornet-D combat missile systems, BMP-3 and Kurganets-25 infantry fighting vehicles, among others.

Mine-Resistant Ambush Protected (MRAP) armored vehicles Typhoon-K and Typhoon-U are also expected to be a part of the celebratory procession, as well as missile systems, such as the Iskander-M, Buk-M2, Tor- M2U and S-400. The procession of the military equipment column will end in the passage of the Bumerang amphibious wheeled armored personnel carriers.

The aircraft participating in the event will fly in 18 aviation groups over the Red Square.

The aerial part will start with four Mi-8 military transport helicopters and Russia’s largest freighter Mi-26, followed by the Mi-28N and K-52 and Mi-24P helicopters.

The helicopters will be followed by Russian military aircraft, such as the Il-76MD-90A military transport aircraft. The Tu-95MS, Tu-160 and Tu-22M3 strategic bombers will also fly over the Red Square, as well as the Il-78 refueling tanker aircraft.

The combat aircraft that took part in Russia’s anti-terrorist operation in Syria — the Su-24M and Su-34 bombers, and the Su-25 attack aircraft — will also participate in the parade, among other aircraft.

The day's celebrations will conclude with fireworks on the Red Square after dawn at 10:00 p.m. local time. A lot of other Russian cities are also seeing their own parades to mark Victory Day.

Mine Clearance in Syria’s Douma to Last for Months, Russian Military Says