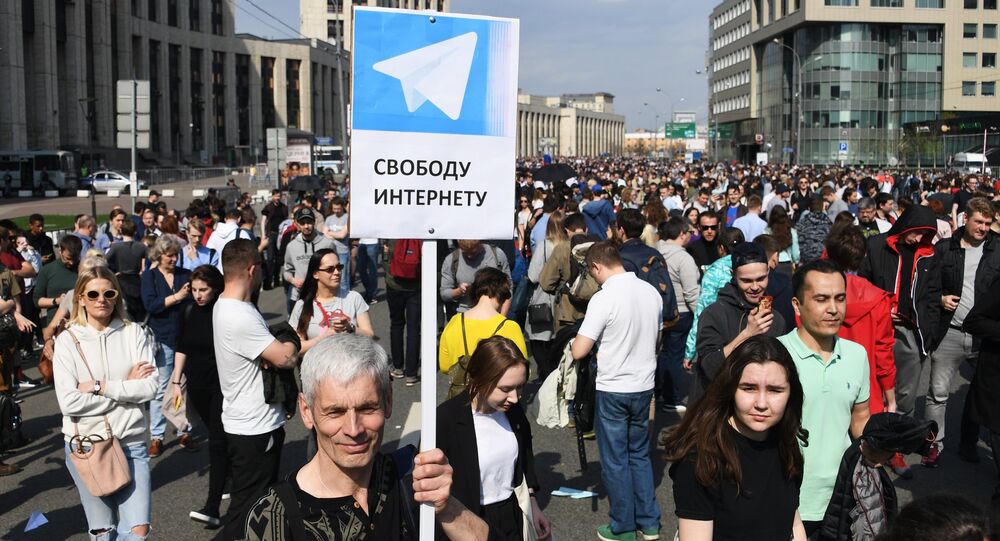 NOVOSIBIRSK/VLADIVOSTOK/KRASNOYARSK (Sputnik) - Opposition rallies, including those not authorized by local authorities, were held on Saturday in Russia's cities of Novosibirsk, Vladivostok and Krasnoyarsk.

About 400 people took part in the authorized rally in Novosibirsk, which also involved different political forces, including supporters of Russian opposition figure Alexei Navalny, a Sputnik correspondent reported. The event was authorized as a rally against the Russian court's decision to block the messaging service Telegram and in favor of the free exchange of information.

A high-ranking official from the city's administration told reporters that there were violations during the event.

"The number of participants was coordinated with the police… a total of 400 people. The organizer committed some violations… there are people in masks, but he [the organizer] does not take measures to remove them, although we have made several warnings. Slogans and banners also do not meet the stated goals. The organizer has been warned twice, but he has not taken any measures, so an administrative protocol will be compiled," the official said.

© Sputnik
Viber Says Became 'Collateral Victim' of Telegram Blocking in Russia
An authorized rally was also held in Vladivostok. The participants of the rally had home-made posters in support of free Internet and Russian flags. Police attended the event in Vladivostok, however, no violations were registered.

An unauthorized rally involving several hundreds of people was held in Krasnoyarsk, and at least 15 individuals were detained after ignoring relevant police warnings. This rally also involved Navalny's supporters.

On April 13, a Moscow district court authorized Roskomnadzor, the Russian communications watchdog, to block Telegram messenger in Russia without waiting for an appeal of the decision.

The court pointed out that Telegram would remain blocked in Russia until it provided encryption keys to the Russian authorities since the messenger could be used by terrorists to communicate via secret chats.