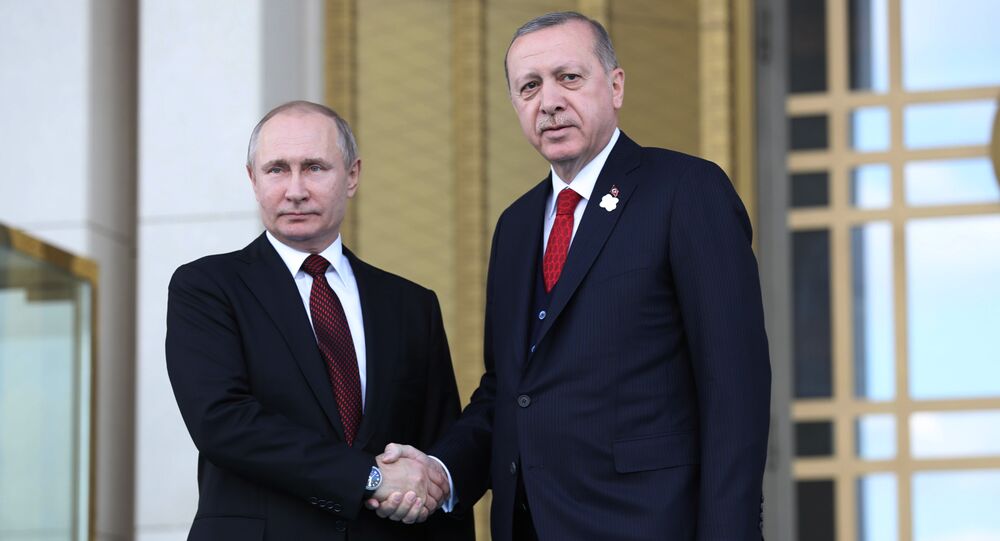 "We are speeding up production and we have finalized the prices, which is very important. In terms of shortening the delivery schedule, we have done this at the request of our Turkish friends and partners," Putin said during a joint news conference with the Turkish head of state on April 3.

Regarding the nuclear project, which a Russian company will build for a cost of $20 billion, the Russian president stated, "We are not just kick-starting the construction of Turkey's first nuclear plant, we are founding Turkey's nuclear sector."

While the two leaders have clear positives to talk to the public about in terms of bilateral cooperation, one analyst explained to Sputnik Radio's Loud & Clear that their relationship has endured some significant bumps along the road — not least the December 19, 2016, murder of Andrei Karlov, Russia's ambassador to Turkey, who was gunned down at an art gallery in Ankara.

​But since that disaster, relations between Moscow and Ankara "picked up," according to the analyst.

"I see this as political theater between two countries that are still at odds on many things. But both countries' national interests and geopolitical interests have decided that they are going to play each other off of their enemies in kind of a mutually embracing cooperation — while they keep daggers poised at each other's backs," international affairs and security analyst Mark Sleboda told hosts John Kiriakou and Brian Becker.

Noting that Russia-Turkey relations can be mercurial, Sleboda explained that it's easy for some to forget that Turkey is a member of NATO. After enjoying positive political and economic relations since the end of the Cold War, in which Turkey and Russia found themselves on opposite sides of a nuclear standoff, Sleboda explained that the deadly and prolonged crisis in Syria has strained Turkish-Russian ties.

"Turkey, from the very beginning, has been part of an alliance that has literally been arming, training and salarying sectarian militants — often literally embedded and allied with al-Qaeda to overthrow the Syrian government, which Russia has a mutual defense pact with," he said.

"Russia could simply not allow Syria to — so close to its own borders, basically a 24 hour jeep drive away from southern Russia — become a failed state and terrorist breeding ground, like [what] has evolved in Libya," Sleboda noted.

"As they ended up on opposite sides of this conflict — with Turkey being the main logistic and support route through which these jihadis were funded, not only by Turkey but the United States, the United Kingdom, Saudi Arabia and Qatar — everything had to, and continues to, come through Turkey, there's no other place [the ‘rebels'] can be supplied from, except the very south of Syria where there has always been limited conflict."

Despite ending up again on opposing sides in an increasingly global war, Russia and Turkey continue to be drawn together. Specifically, Sleboda cited the Astana Agreements, which have aimed at achieving some kind of peace accord in Syria as "a way for Russia, Turkey and Iran to come to the forefront of the Syrian conflict."