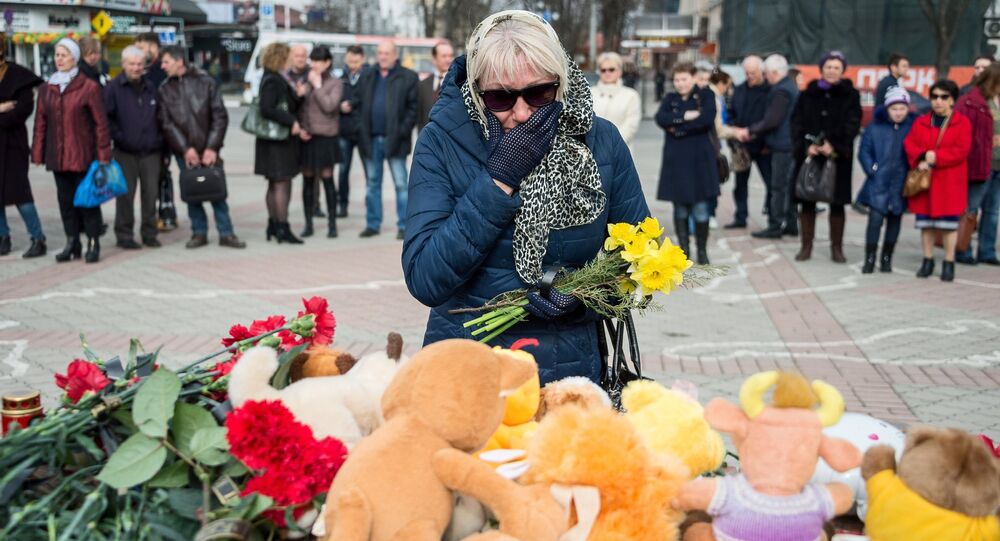 KEMEROVO (Sputnik) - A total of 27 victims of a deadly fire in a shopping center in the Siberian town of Kemerovo have been identified as for the current moment, the head of the main directorate of the Russian Emergencies Ministry in the Kemerovo Oblast, Alexander Mamontov, said on Wednesday.

"As for today, 27 people were identified. Today, 14 people are expected to be buried," Mamontov said at a meeting of the emergency response team.

On Sunday, a fire broke out in the Zimnyaya Vishnya ("Winter Cherry") shopping center in Kemerovo. According to the Russian Emergencies Ministry, a total of 64 people were killed in the tragic incident. The Kemerovo Region declared a three-day mourning period while Russian President Vladimir Putin declared a day of national mourning on Wednesday.

© Sputnik / Vitali Ankov
US Envoy to Russia Went to Church in Moscow to Mourn Kemerovo Mall Fire Victims
On Tuesday, around 2,000 people reportedly gathered in the center of Kemerovo, demanding justice and revelations from the local authorities about the deadly incident. Mayor of Kemerovo Ilya Seredyuk and the region's vice governor, Sergey Tsivilev, tried to communicate with the protesters, who demanded that the real number of victims be revealed as well as to talk to long-time regional Governor Aman Tuleyev. The protesters chanted: "Truth! Truth! Tuleyev! Tuleyev!" Some of them held posters asking for the real death toll of the fire.

Police did not interfere with what went on at the square but ensured the security of the regional administration, blocking protesters' access to Soviet Avenue in order to avoid disruptions in traffic.

Meanwhile, all over the country people have gathered in the cities to mourn the victims of a deadly incident in the Siberian city of Kemerovo. Dozens of foreign leaders and presidents have expressed condolences to Russia over the tragedy that had killed a total of 64 people, mostly children.