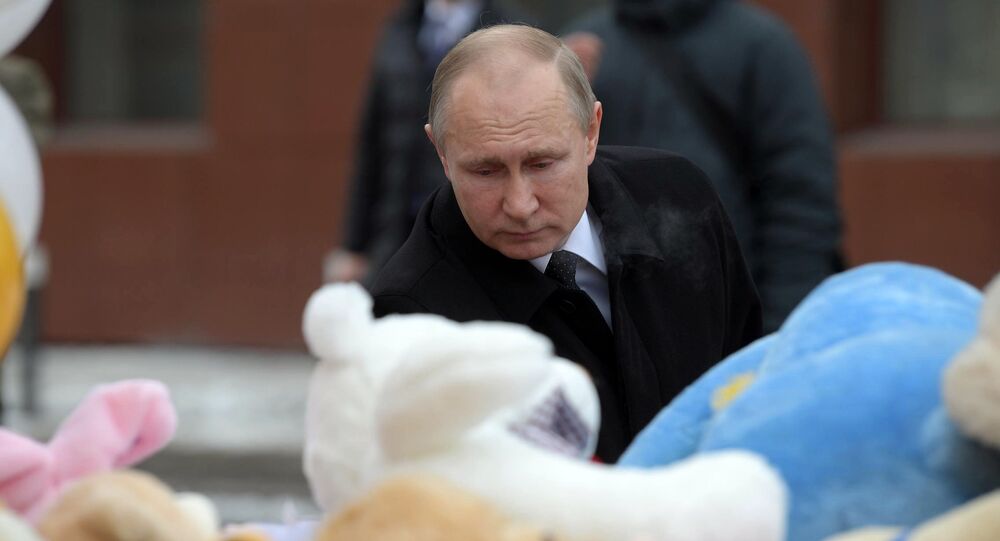 KEMEROVO (Sputnik) - A deadly fire engulfed a shopping mall in the Russian city of Kemerovo on March 25, leaving at least 64 people dead, including 41 children. The country is mourning the victims of the tragedy and investigating its cause.

Vladimir Putin has signed a decree declaring three days of national mourning beginning on Wednesday for the victims of the Kemerovo shopping mall fire. It was suggested to cancel all entertainment-related TV shows.

Putin on Tuesday, during his trip to Kemerovo, laid flowers near the shopping center and held an unplanned meeting with an initiative group of citizens who expressed distrust of the investigation of the fire.

“At the moment an investigation team of 100 people is working here. It is led by the head of the Investigative Committee. Do not even doubt, all those responsible [for the tragedy] will be punished,” Putin said.

He urged not to doubt official data on the number of casualties in the Kemerovo shopping mall fire, he warned against trusting unreliable reports on social media.

What the Investigation Says

Russian Investigative Committee head Alexander Bastrykin said that a security guard at the shopping center did not switch the warning system on after the start of the fire, despite that it could have been switched on manually.

"Since March 19, the fire alarm system hadn't been working, but nobody has been engaged in [fixing] this problem," Bastrykin said at a meeting held by Putin.

"We cannot give any reasonable explanation for this," he added.

Following the fire in Kemerovo, 59 dead bodies have been found and taken to hospital, while 21 of them have been identified, spokesperson of the Investigative Committee Svetlana Petrenko said.

She added that five people were charged in connection with the deadly fire.

Firefighters were called to the Kemerovo shopping mall too late, three cinema rooms and a petting zoo were already burning by the time of their arrival, the Russian Emergencies Ministry said.

One of the employees told Lenta.ru that in the shopping center there were no fire extinguishers.

"I worked for six months and did not see any fire extinguishers. When everything happened, there was no fire alarm. A month ago we had an evacuation drill. They turned on the fire alarm, it was very well audible, it was on for quite a long time. I do not know why it did not work this time," he said.

According to him, the fire spread too quickly, engulfing the foam rubber balls and trampolines in the children's game room; the room was instantly filled with smoke, and it was impossible to see anything. The man brought a colleague and child "on muscle memory" to the stairs to the third floor, then went back to help other children, stuck in the game complex. He was assisted by other employees of the center.

Protests have erupted to voice public outrage at the Winter Cherry shopping center's negligence before and after the fire that killed at least 64 people. Around 2,000 people are holding an unauthorized demonstration in the Russian city of Kemerovo on Tuesday, two days after the deadly fire in a local shopping center, a Sputnik correspondent reported.

Moscow residents gathered on Tuesday on the Manezhnaya Square in the center of the Russian capital to pay tribute to the victims of the fire.

On Sunday, a major fire broke out in the shopping center in Kemerovo. Russian Emergencies Minister Vladimir Puchkov said that a total of 64 people were killed in the tragic incident. A source in the region’s emergencies service told Sputnik that 41 children lost their lives.