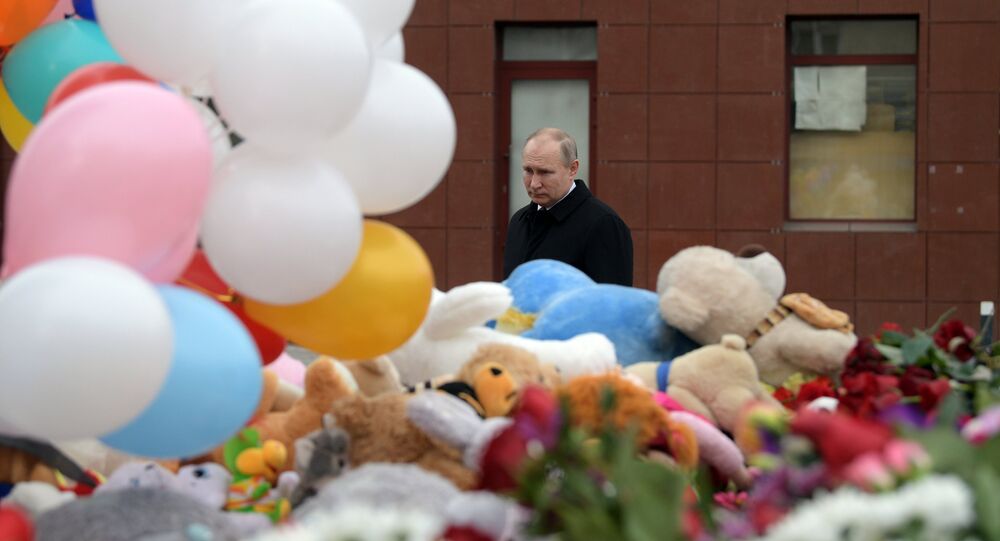 Russia's President also inspected a facade of the burned building with Sergey Menyaylo, the president's envoy in the Siberian Federal District.

Vladimir Putin said that criminal negligence and carelessness were direct to blame for the deadly fire which engulfed the Zimnyaya Vishnya shopping mall in Kemerovo on Sunday. The blaze claimed 64 lives, mostly children, and left dozens more injured, according to Russian Emergencies Minister Vladimir Puchkov.

"What is happening here? There are no hostilities and it wasn't an unexpected methane leak in a mine. People came to relax with their children. We talk about demographics, and here we've lost so many people. Why? Because of criminal negligence and carelessness," Putin said at a meeting to address the consequences of the tragedy.

© Sputnik / Alexander Patrin
Russia Mourns Victims of Shopping Mall Fire in Kemerovo
The President also extended his personal condolences to the families of victims and started the meeting with a moment of silence.

On Tuesday, Putin instructed the head of Russia's Investigative Committee, Alexander Bastrykin, to provide a legal assessment of all of the executives who'd let the deadly shopping mall fire happen.

"It is necessary to give a legal assessment of the actions of each executive. It is impossible to get papers without money, but for money they will sign everything," Putin said at the meeting.

Bastrykin, for his part, said that the Investigative Committee had seized a huge number of documents, which are currently being studied as part of the criminal investigation into the fire. The mall had originally been a confectionery factory, built in 1968, which was rebuilt as a shopping center in 2013, and there were probably code violations, the official noted.

© Sputnik
Security Guard Turned Off Alarm System at Kemerovo Mall – Russian Investigative Committee
The Russian Investigative Committee has opened several criminal cases into the incident, including into the deaths through negligence and fire safety violations. The official cause of the conflagration has yet to be determined, although reports suggest that it could have been started by a child misusing a cigarette lighter or malfunctioning electrical wires.

The tragedy has already prompted a series of checks into fire safety regulation compliance across the country.

The Kemerovo fire was one of the deadliest blazes in Russia in recent years; others took place in Samara, the Krasnodar Region and Perm in 1999, 2007 and 2009, respectively.