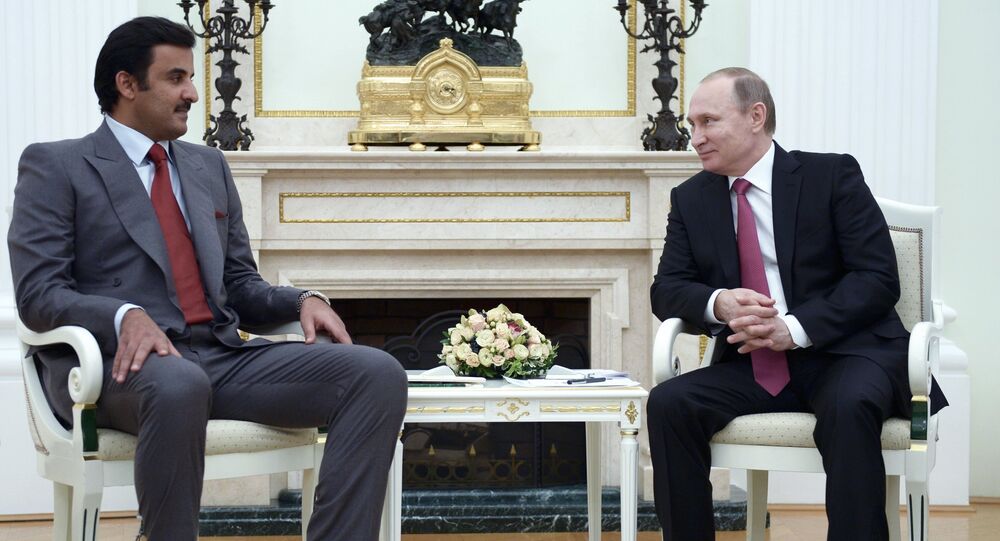 "Our trade increased last year. However, [the figure] in absolute terms does not reflect our capacities, but the trend is very good. Investment cooperation is developing… We met almost two years ago, but relations between our countries are constantly developing, we are in regular contact. This year marks the 30th anniversary of the establishment of diplomatic relations between our countries," Putin said.

Trade between the two countries amounted to $73 million in 2017 compared to $59 million in the previous year, according to the Russian Federal Customs Service (FCS).

The Emir also stressed that bilateral relations had "noticeably strengthened" over the last few years. He touched upon the countries’ cultural cooperation, adding that he had visited the Tretyakov Gallery in Moscow within the framework of the cross-cultural year between Russia and Qatar.

© Sputnik / Alexey Vitvitsky
Qatar Sees Russia's Launch of Yamal LNG Project as Part of Market Growth
He agreed with Putin that the countries should build on their "solid ties" and "mutual trust" to further strengthen bilateral relations in all areas and make sure that the state of relations "meets our ambitions."

"We are counting on our Russian friends … Russia plays a considerable role with regard to the issues of the Arab world, its historical ties with Arab countries, including the role it plays while assisting some countries of the region to settle their problems," he said, expressing his intention to cover the relevant topics during the talks.

Since September 2015, Russia has been engaged in a military operation against terrorist groups in Syria at the request of Syrian President Bashar Assad. Moscow, alongside Tehran and Ankara, is also a guarantor of the ceasefire regime in the conflict-hit country and a participant of the Astana process on the Syrian crisis settlement.