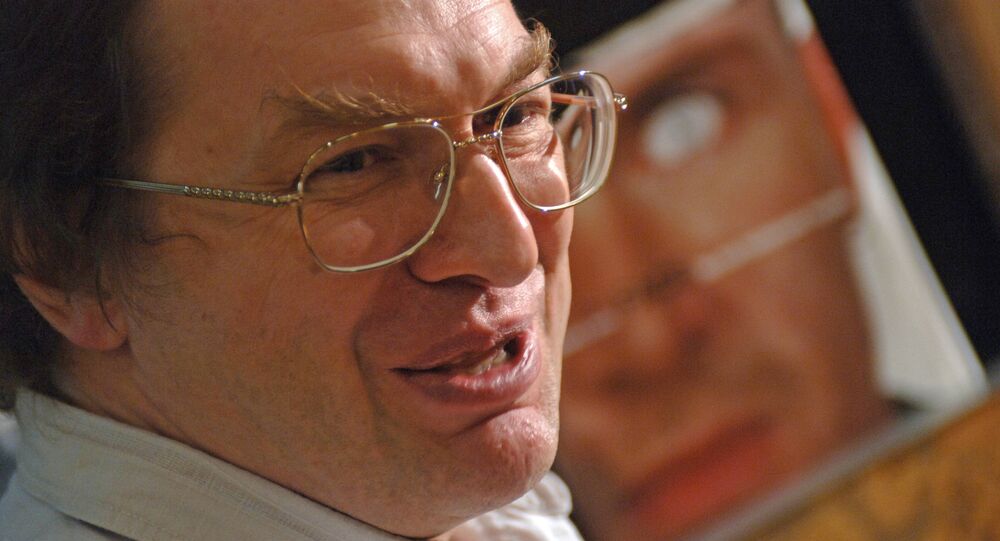 Sergei Mavrodi, who was well known in Russia as the founder of a famous pyramid scheme that deceived millions of people, died on March 26, 2018 at the age of 62. Sputnik has gathered the five most interesting facts about this controversial figure.

Creator of One of the Biggest Financial Pyramids in the World

Mavrodi organized his MMM company in 1989, when basic entrepreneurship was already permitted in the USSR, conducting its first initial public offering (IPO) in 1993. Its stocks sold so well that very soon company needed another public offering, but the Russian Ministry of Finance refused to give it a green light. However, Mavrodi found a workaround — this is how the infamous MMM pyramid appeared.

He started selling special "tickets" that formally were not securities, but for some reason Mavrodi decided to stylize them after the old Soviet currency, with his own portrait instead of those of Soviet leaders. The ingenious "workaround" was that clients formally didn't buy MMM-tickets, but received them as souvenir for their personal contribution to Mavrodi and vice versa — they received the contribution from him when they returned them.

With their value growing at a steady pace determined by the founder himself, it all quickly turned into a pyramid scheme involving, according to the most conservative estimates, 10 million people in Russia. Mavrodi was already planning on going global with MMM and studied the US market when the Russian government decided to take action, fearing that inevitable crash of the pyramid would plunge millions of ordinary people in the emerging market economy into dire poverty.

The Russian government decided to utilize the US technique in capturing elusive gangsters to get to Mavrodi, arresting him in 1995 on charges of tax evasion. The pyramid worked for some time, but never regained its popularity. He managed to shift the blame for it on to the Russian government, getting people to defend him and organize protests. MMM went bankrupt 3 years later, leaving, according different estimates, anywhere from thousands to millions of people without the money they invested into it.

After serving his sentence, he organized several other projects that he directly called pyramid schemes, warning those participating about the possible losses they might incur, but this time he went global (ignoring the Russian market), receiving donations for his new MMM via Bitcoin. None of them survived for long.

Being a master of finding "workarounds," Mavrodi quickly found a way out of prison — he managed to get himself elected as a member of parliament in 1995. The residual popularity of MMM brought him the necessary votes. He and all his MMM offices received immunity from prosecution. It didn't last long, though, as he lost his mandate due to not attending a single session in parliament for almost a year.

After this, he made several other moves, including running for President in 1996 and again in 2018, although he was never registered. He also created a political party in Ukraine, which was called MMM and that supported Denis Pushilin, running for the Ukrainian parliament.

Mavrodi later wrote a book called "Pyramid," about his financial endeavor and how it was put to an end by the government. Later, Russian filmmaker Eldar Salavatov turned it into a motion picture with main character name changed to Mamontov and many events embellished, transforming it from a story about a con man into a story about someone fighting against a corrupt system.

Mavrodi himself disliked the movie, which was warmly received by critics, claiming that there was too much "Hollywood" in it. He noted that in life, everything was much "harsher" than was shown in the motion picture.

© Sputnik / Andrey Stenin
Founder of the financial pyramid "MMM" Sergei Mavrodi in Khamovnichesky court in Moscow, where a complaint for his arrest was heard. Mavrodi was imprisoned for five days for failing to pay a fine of 1000 rubles

Mavrodi actually wrote many books while he was imprisoned. Namely, he wrote a series called "The Son of Lucifer," which contained 150 novels, each of them representing a separate single day, a separate set of characters and situations.

READ MORE: Apple Co-Founder Wozniak Reveals How He Was Scammed Out of $70K in Bitcoin Fraud

Among other things he wrote poems, plays and poetry. He also wrote and performed his own songs, using classic melodies. Most of them were published on open online sources by Mavrodi himself.

Created His Own Popular Web Series

In 2005, Mavrodi launched his first web series called "Zombie," which received a certain amount of attention from the public. According to the author, the series are devoted to those, who "live a good life" in Russia. Episodes from its 2nd season, called "Imp," received between 40,000 and 90,000 views each. In 2017, he launched his 3rd project named "Anti-World," which was a bit more successful — 100-130 thousands views per episode.

Mavrodi, whose pyramid projects have since crumbled, claimed that he did them to "persist in the media space" and for fun.

Fraudster Mavrodi in Hospital after Falling Ill in Custody