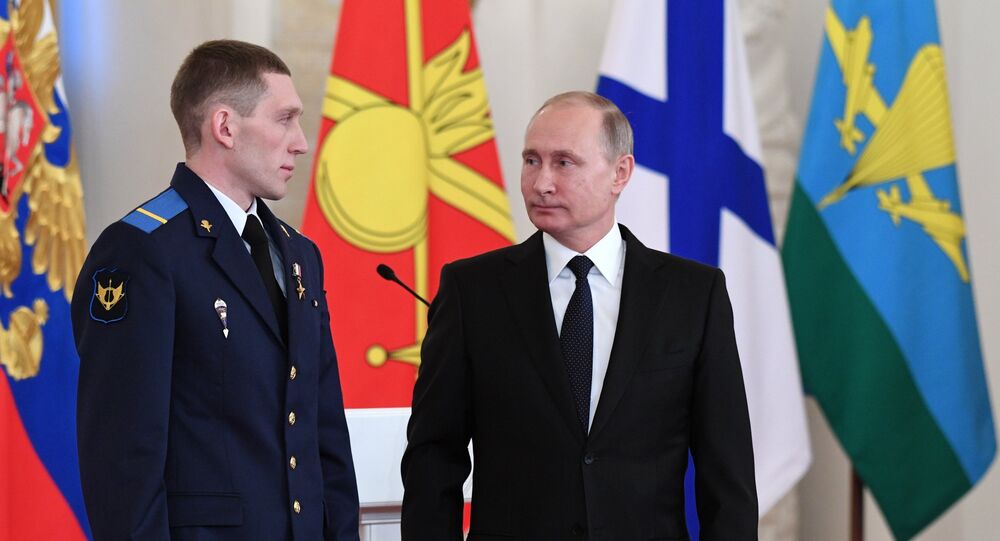 Lance-corporal Denis Portnyagin, when ambushed with his unit by the terrorist group Daesh* in Syria, was ready to blow himself up with a grenade to keep from being taken captive.

Russian President Vladimir Putin has declassified some details of the heroic deeds of lance-corporal Denis Portnyagin in the fight with Daesh* (ISIS) terrorists in Syria, which he reveals in the new film “PUTIN.”

In August, 2017, close to the strategic city of Akerbat, a 4-5 man Russian special forces unit responsible for calling in airstrikes joined a group of Syrian government fighters, when they were unexpectedly attacked by Daesh* militants. While some Syrian forces retreated and all the other members of his unit were injured, including the commander and the second officer, the youngest unit member, lance-corporal Denis Portnyagin, took a machine gun and fended off nearly 40 attacking terrorists, killing 14 of them. After bullets hit his helmet and his weapon, he continued to fight with grenades. According to Putin, when the threat that they would take him prisoner was all but assured, Portnyagin prepared to blow himself up and drew their fire. Mortar fire could block the attackers; after the airstrike, another Russian unit joined them and evacuated Portnyagin’s group.

In December, 2017, Denis Portnyaging was awarded a Gold Star and the title of Hero of the Russian Federation, the state's highest honor. The Ministry of Defense didn’t give any more information, other than saying that he was awarded for fulfilling special tasks. In the latest interview Putin expressed hope that Portnyagin will be promoted.

“He’s a hero. If he wasn’t, then who would be. And there are many such people in our military,” Vladimir Putin said.

“PUTIN” is a new film about the current Russian president, who is seeking a fourth term in office. For two hours, Vladimir Putin tells his campaign press-secretary and the film's creator about his family, the crucial events of his term as well as his basic views and beliefs. Prominent political figures from Russia and abroad, as well as guests who knew Putin long before his political career, share their perceptions of the Russian president.  A second part will be released later.

Russian Heroes Killed During Military Operation Against Daesh in Syria