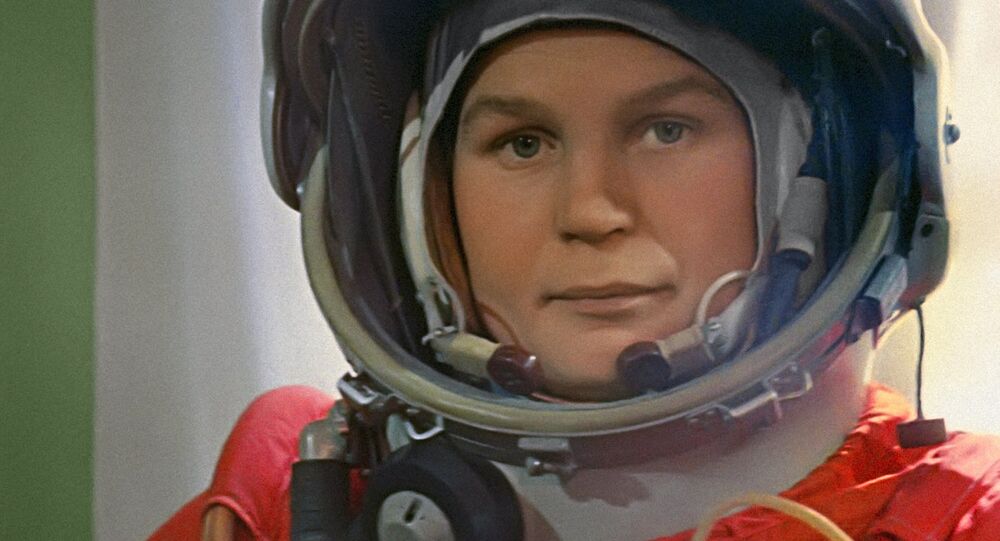 Soviet-Russian cosmonaut Valentina Tereshkova is celebrating her 81st birthday today. In honor of the occasion, Sputnik found some interesting facts about her life, her character, and the fateful mission in June 1963 which put her into the history books.

#8: Nearly 55 years after her flight aboard the Vostok 6 spacecraft, which lifted off from the Baikonur Cosmodrome on June 16, 1963, Tereshkova remains the only woman ever to have completed a solo space mission.

#7: In the course of her mission aboard the Vostok 6, which lasted 2 days, 22 hours and 41 minutes, Tereshkova, then 26, racked up more time in space than the combined time of all American astronauts who had flown up to that time. Orbiting Earth 48 times, the Vostok 6 flew 1.97 million km with Tereshkova onboard.

#6: Tereshkova's call sign during her mission was 'Chaika' – Russian for Seagul, a name which the first man in space, Yuri Gagarin, bestowed her. Gagarin and legendary Soviet rocket designer Sergei Korolyov kept in touch with Tereshkova throughout her mission, and the two cosmonauts remained friends until Gagarin's death in 1968.

Tereshkova later recalled that when she first made it into space, she uttered the phrase "Hey sky, take off your hat, I'm on my way!", and that she was reprimanded for this by Gagarin, who urged her to stay focused.

#5: Tereshkova was the first civilian to fly into space, and received the honorary title of major-general of aviation in order to be inducted into the Soviet Cosmonaut Corps.

© Sputnik
Image of Valentina Tereshkova transmitted from inside the cabin of the Vostok 6 spacecraft during her flight.

#4: Tereshkova was selected for her historic flight from among a group of over 400 applicants, which was later whittled down to five. The grueling, classified, six-month training process included courses on rocketry and spacecraft engineering, over 100 parachute jumps, training onboard a MiG-15UTI fighter jet, weightlessness, isolation, centrifuge testing and more.

© CC0
PHOTOS Show Alleged Soviet Nuclear-Powered Satellites in Space
In later years, Tereshkova would recall the extreme rigorousness of the training process. She noted, for example, that while modern cosmonauts are given centrifuge training up to 8 Gs, she and her colleagues trained at 12 Gs. Moreover, she was asked to sit in a thermal chamber with the temperature cranked up to 80 degrees Celsius in full flight gear. She has also complained that one of the problems that she and her fellow female would-be cosmonauts experienced was that all spaceflight hardware, "including spacesuits and spacecraft comfort-assuring systems, were designed mostly by men and for men."

Due to her character, solid family background, and personal charm, cosmonaut trainer Nikolai Kamanin would dub Tereshkova as "Gagarin in a skirt."

#3: Tereshkova's flight almost ended in tragedy, something she kept a secret for nearly forty years. In 2004, it was revealed that a coding error in the Vostok 6's control program had programmed the craft to ascend out of the Earth's atmosphere instead of descending upon the initiation of the landing procedure.

Fortunately, Tereshkova noticed the error in time, and with Gagarin and Korolyev's help, the problem was corrected, and the Vostok 6 successfully descended and landed. Upon touchdown in Altai, southern Siberia, Tereshkova suffered a bruised nose, but was otherwise unharmed.

#2: Following Tereshkova's flight, Soviet space program officials planned to create a whole detachment of women cosmonauts. The plans were interrupted by a series of tragedies. In 1966, Sergei Korolyev died, followed by Gagarin, and in 1971, a trio of Soviet cosmonauts died aboard the Soyuz 11 during reentry. These events, coupled with the perceived negative publicity of women dying in space, led to the scrapping of the specifically women's cosmonaut program. Another woman wouldn't go to space until 1982 with Svetlana Savitskaya's mission onboard the Salyut 7 space station. Savitskaya would go on to become the first woman to perform a spacewalk in July 1984.

For Tereshkova, Gagarin's death proved a double tragedy, because it meant the end of her career as a cosmonaut. Soviet authorities did everything they could to keep her safe, even temporarily forbidding her to fly on airplanes, and never allowed her to fly another mission to space. Even in her later years, Tereshkova has admitted that she still dreams about space flight. She's said that she would agree to a one-way mission to Mars in a heartbeat.

#1: Tereshova has always been a strong advocate of women's rights, and has talked about the subject at length. She once quipped that "A bird cannot fly with only one wing. Human space flight cannot develop any further without the active participation of women."