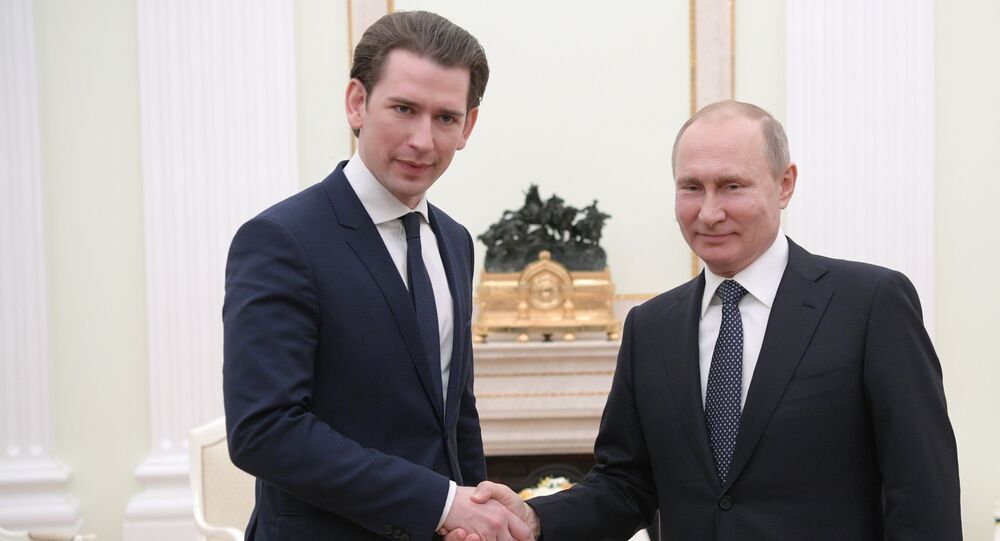 Russian President Vladimir Putin has discussed with Austrian Chancellor Sebastian Kurz during talks in Moscow on Wednesday a wide range of issues on the international agenda, including the situation in Ukraine and Syria as well as the Nord Stream 2.

The Nord Stream 2 pipeline is a purely economic project that is absolutely depoliticized, and it will not be an alternative to the transit of Russian gas through the territory of Ukraine if the Ukrainian side proves the advantages of using its gas transportation system, Russian President Vladimir Putin said Wednesday following talks with Austrian Chancellor Sebastian Kurz.

"You know our position on the Nord Stream 2 project: we are supporters of the implementation of this project, which undoubtedly is absolutely depoliticized. It is a purely economic and, moreover, purely commercial project, because participants of this project calculate their profits, economic gains from its implementation and come to the conclusion that such implementation is expedient," Putin said.

"This, by the way, is not an alternative even to the Ukrainian route. If Ukraine presents economically justified parameters for the use of its gas transportation system, we have nothing against continuing cooperation with Ukraine," he said.

Kurz, in his turn, said that Vienna supported the project, but it was still necessary to work out many details.

"The second big project, which concerns not only Austria but also Germany and other states, is the Nord Stream-2. The Austrian federal government supports it, but here, of course, we need to work through a lot of details, and we need to clarify some issues, as well as the impact of this project on other countries," Kurz said at a joint press conference following talks with Russian President Vladimir Putin in Moscow.

Austrian Chancellor Sebastian Kurz has called on Russia to influence Damascus to convince all sides to begin negotiations and end war.

"I am calling on Russia as it has both influence here [in Syria] and responsibility. This is a superpower, it is able to influence the regime, the situation in Syria. This is a great hope of ours that everyone will return to the negotiations table and end war in Syria as soon as possible," Kurz told a press conference in Moscow.

Russian President Vladimir Putin, in his turn, said that Russia would seek to establish a political dialogue in Syria.

"We will definitely seek to establish a political dialogue. We will seek to launch real work on a constitutional process to draft the main law of the country, and normalize the situation on the basis," Putin told a press conference.

According to Putin, the prospects of resolving the situation in Syria depend on whether the sides to the conflict want to settle all issues.

“The situation is difficult. The prospects of resolution depend on the warring sides, on their inner desire to achieve a settlement, to achieve it and preserve the territorial integrity and the unity of their countries,” Putin told a press conference.

Speaking further, Putin said that terrorists in Eastern Ghouta shelled Damascus around 50-80 times a day, including the region of Russia’s embassy.

"Attacks from there are taking place all the time, some days there are 80, 50 rocket and mortar attacks a day. Mines reach the territory of the Russian embassy and chamber of commerce," Putin told a press conference adding that Russia would not tolerate this forever.

He expressed hope for cooperation and resolution of the situation in Eastern Ghouta.

Russia is "at minimum not against" the deployment of peacekeepers throughout the entire Ukrainian territory, but the issue must be negotiated with the self-proclaimed republics in Donbas, Putin said.

"Now they say [the peacekeepers] need to be everywhere. That is, in fact, about putting all this territory under international control. Is Russia for or against it? We are at a minimum not against it. But this issue must be negotiated with these unrecognized republics," Putin said at a news conference following talks with Austrian Chancellor Sebastian Kurz in Moscow.

On Relations Between Russia and Its Partners

The Russian President noted tha putting the centuries-old economic ties between Russia and the European countries in dependency on current political trends was a mistake.

"You know, we do not just have good and long-standing relations with European countries, for example, with Austria — they are deep in nature, our relations go back to the depths of the centuries. And, of course, to put these relations, which developed over the centuries, in dependence on the current political conjuncture is a mistake and a bad prospect," Putin said at a press conference following talks with Kurz in Moscow.

At the same time, as far as anti-Russia sanctions are concerned, the goals set by the West have not been achieved, restrictions are senseless and harm everyone, Putin said.

"We did not impose the sanctions, but the sanctions were imposed against us. This clearly harms the interests of the European Union countries and Russia. It is, however, unknown whom it affects more. The main thing is that the goals set by the authors of such policies are not achieved… In a certain sense, this is meaningless and harmful," Putin said.