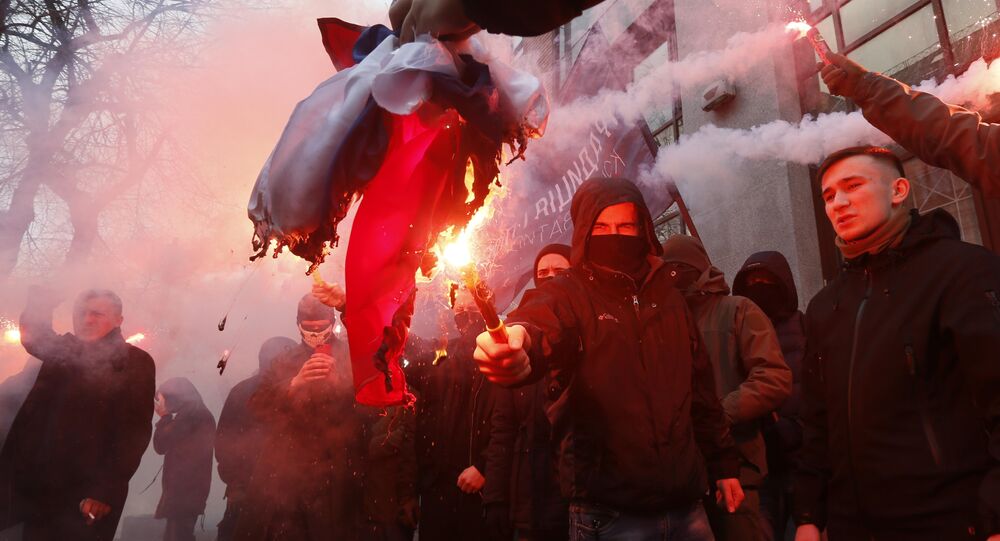 Russia Summons Ukraine's Representative Over Attack on Building in Kiev

MOSCOW (Sputnik) - The Russian Foreign Ministry has summoned Ukraine's acting Charge d'Affaires Ruslan Nimchinsky over the attack on the building of the Russian foreign cooperation agency Rossotrudnichestvo in Kiev, the Foreign Ministry said Monday on its website.

"The strongest protest over the continuing outrageous behavior of nationalists-Russophobes, who organized attacks on the Russian Center for Science and Culture and the building of Rossotrudnichestvo as well as offices of Russian banks in Kiev ... at the suggestion of Kiev authorities, was conveyed to [Nimchinsky]," the Foreign Ministry said.

The ministry urged Kiev to terminate the actions of radical nationalists in the country, creating conditions for the safe operation of Russian institutions in Ukraine, referring to Ukraine's obligations of Kiev on generally recognized international conventions and Russian-Ukrainian intergovernmental agreements.

"The Russian side has demanded [from Kiev] that all those responsible for the attacks are found and held responsible," the Russian Foreign Ministry said.

According to the ministry, the Russian embassy in Kiev sent a letter of protest to the Ukrainian Foreign Ministry and issued a statement for the media.

The ministry also expressed concern that the outbreaks of Ukrainian nationalism had caused no reaction from western states.

"It is a matter of concern that the aggressive nationalism in Ukraine has not met an adequate reaction from foreign sponsors of Kiev's authorities. Moreover, in some cases such sentiments are even being welcomed. Unfortunately, the tragic lessons of the previous century are not being taken into account in Europe and in the United States," the statement added.

The move is reasoned by Saturday's and Sunday's attacks on the building of Rossotrudnichestvo, as well as offices of Russian banks in Kiev by members of a nationalist group. The radicals caused significant material damage, throwing stones, eggs, were breaking windows and threatening the staff and the guests with physical violence.

Commenting on the attacks on the Russian center, head of Rossotrudnichestvo Eleonora Mitrofanova said that Moscow would take all necessary measures via diplomatic channels.

Reacting to the attacks, Alexander Lukashevich, Russia's permanent envoy to the Organization for Security and Co-operation in Europe (OSCE), stated that Moscow expected the OSCE Special Monitoring Mission to react properly to the situation.