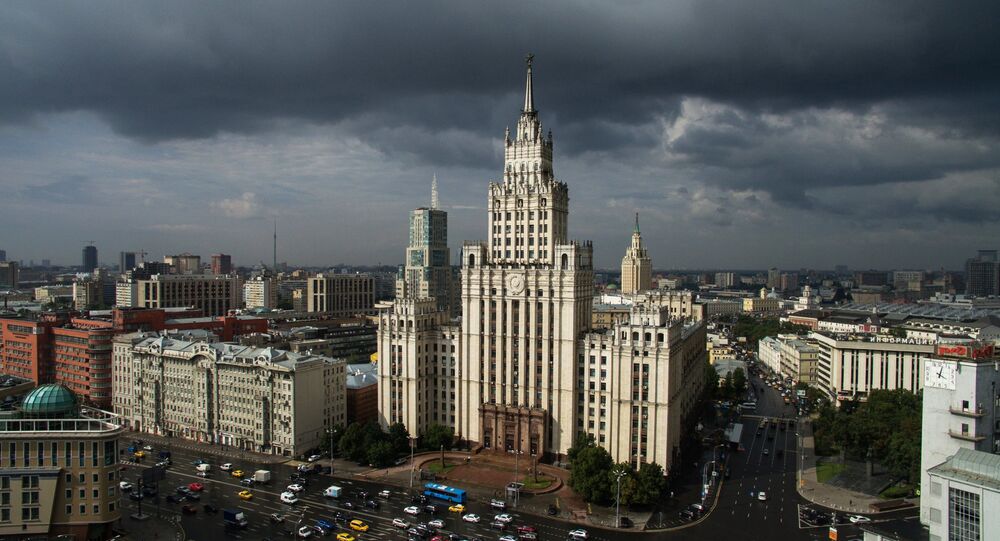 MOSCOW (Sputnik) – The Russian Foreign Ministry on Saturday expressed disappointment with the confrontational and anti-Russian stance in the recently issued US Nuclear Posture Review (NPR) and outlined intentions to take the policies, revealed in the document, into account in ensuring its own security.

The NRP, published on Friday, claims a stronger US nuclear deterrent is needed to discourage Russia, China, Iran and North Korea from either developing new weapons or expanding existing arsenals. The US doctrine envisages short-term plans to modify existing submarine-launched ballistic missile (SLBM) warheads to provide a low-yield option and pursue a modern nuclear-armed sea-launched cruise missile (SLCM) in the long run. The NPR notes that these activities are not intended at being employed in a nuclear warfare, however they are aimed at raising the US nuclear threshold to ensure that the country's potential adversaries perceive no possible advantage in nuclear escalation.

Russian Ambassador to the United States Anatoly Antonov was the first to react to the release of the NPR. The diplomat suggested on Friday that Washington used alleged Russian threat to justify a hike in military spending and nuclear buildup. Antonov noted that the document raised questions and did not encourage practical work.

Moscow Will Have to Take US Policies into Account

"The content of the new nuclear doctrine (the so-called Nuclear Posture Review) released by the United States on February 2 has provoked our deep disappointment. The confrontational and anti-Russian nature of this document strikes the eye. We can state with regret that the United States explains its policies for large-scale boost of nuclear weapons by referring to modernization of the nuclear forces in Russia and alleged increasing role of nuclear weapons in the Russian doctrine statements. We are accused of lowering the nuclear threshold and of conducting some 'aggressive behavior," the Russian Foreign Ministry said in a Saturday statement on the NPR.

Moscow suggested that the NPR questioned Russia's right to self-defense when countering aggression in situations critical for the country's existence.

"Of course, we will have to take into account the approaches introduced by Washington and take all necessary measures to ensure own security," the statement pointed out.

The ministry also suggested that the United States was misleading the global community by saying that the new NPR would not lower the threshold of nuclear weapons use.

Moscow expressed deep concern over the fact that in its NPR, the United States allowed for the possibility of using nuclear weapons in "extreme circumstances," which, according to the Russian Foreign Ministry, are not limited to military scenarios.

© AP Photo / Ed Gunder
Trump Would Okay New Nuclear Test for ‘Political Reasons’ - Reports
"Washington’s practically ‘adjustable’ approach to the use of nuclear weapons is concerning. The possibility of its use in the case of ‘extreme circumstances’ is declared, which the doctrine’s authors do not limit to military scenarios," the statement read.

The US Nuclear Posture Review describes military scenarios in a rather unclear manner, thus allowing the United States to consider practically any case of military force use as a reason for carrying out a nuclear strike on those who it calls "aggressors," the document continued.

The Russian Foreign Ministry categorically refuted all the allegations against it, made in the US nuclear doctrine.

According to the ministerial statement, "the US document is overfilled with different anti-Russia cliches starting from far-fetched accusations of 'aggressive behavior' and different kinds of 'meddling' and finishing with baseless accusations of 'violations' of a whole range of arrangements in the sphere of arms control."

The US nuclear doctrine said that Russia allegedly demonstrates lowering threshold for its first-use of nuclear weapons through statements of the country’s officials.

Reacting to this statement, the Russian Foreign Ministry noted that these accusations against Russia had nothing to do with reality.

"The military doctrine of the Russian Federation clearly limits the use of nuclear weapons to two hypothetical and purely defensive scenarios: only in response to aggression with the use of nuclear and other weapons of mass destruction against Russia and (or) our allies, and also — the second scenario – in case of use of conventional weapons, but only when the very existence of our state is threatened," the ministerial statement read.

"We have directed the attention [of various players] including the United States to the fact, that settling key strategic stability problems, such as unilateral and unrestricted deployment of the US global missile defense system, implementation of the ‘global strike’ concept, the US denial to ratify the Treaty on the Non-Proliferation of Nuclear Weapons and refusal to rule out possibility of deploying weapons in space, would contribute to creating the needed conditions for moving on the path of nuclear disarmament," the statement pointed out.

"Russia strictly complies with its obligations under all the international agreements. We fully implement the Intermediate-Range Nuclear Forces Treaty and the Treaty on Open Skies," the statement read.

The statement also noted that Moscow had not in any way violated its obligations under the 2011 Vienna Document of the Organization for Security and Co-operation in Europe (OSCE) on increasing security and confidence-building measures, and the 1994 Budapest Memorandum on Security Assurances.

"As for the Treaty on Conventional Armed Forces in Europe [CFE], Russia could not have violated this document, because it had suspended its participation in the agreement back in 2007. This has been done because the Treaty, created during the era of confrontation between two military and political blocs, the Warsaw Treaty Organization and NATO [the North Atlantic Treaty Organization], does not fit in today’s reality, because one of the blocs was dismissed long ago, while the other one, on the contrary, has been increasing its potential and expanding its ‘geography,'" the document pointed out.

This new reality has been reflected in the Agreement on Adaptation of the Treaty on Conventional Armed Forces in Europe (CFE-II), which NATO allies led by the United States refused to ratify, the statement noted.