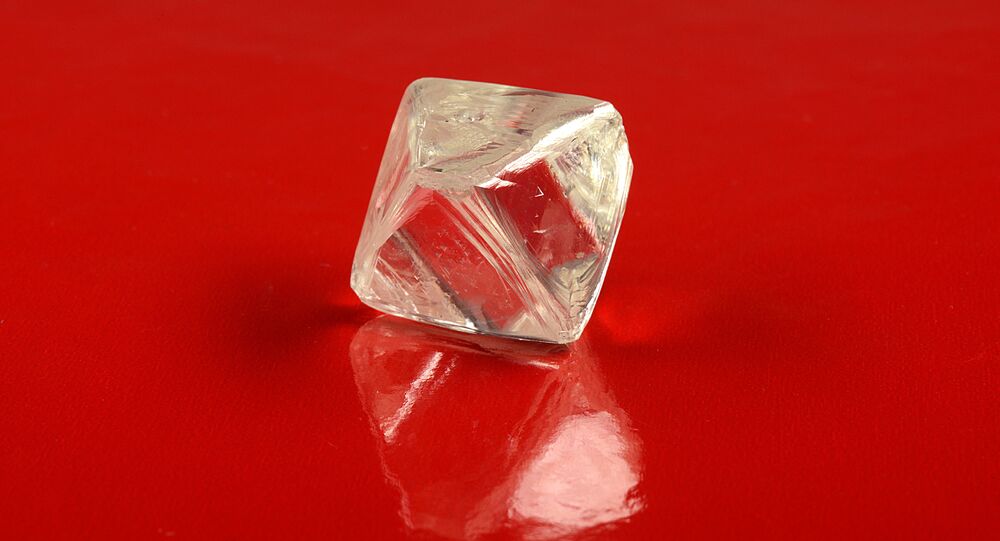 The discovery was made at a mine in Yakutia, the northeastern Russian region where close to 95% of Russia's diamonds and over a quarter of all diamonds mined in the world are found.

The two large, jewelry-quality diamonds, with a mass of 97.92 and 85.62 carats, respectively, are very rare, according to officials from Alrosa, the Russian diamond mining group whose miners made the incredible find.

© Photo : PJSC ALROSA
The second of the two large diamonds found at an Alrosa mine, this one coming in at 85.62 carats.
© REUTERS / Toby Melville
Diamonds Are Forever, And Now They’re on The Blockchain
The transparent, yellow-tinged gems, both coming in the shape of an octahedron, were found at the Yubileynaya mine, one of the largest in the world, last month. The mine has long been known for being the source of some of Alrosa's largest gemstones.

In a press release, Alrosa sales director Yevgeny Agureyev confirmed that large stones of more than 50 carats are "extremely rare," and traditionally sold at auction, where they command high prices. The rarest and cleanest of them are refined by Alrosa's diamond division and sold by the company independently.

Alrosa is one of the largest diamond producers in the world, accounting for about 29% of global production, with mining operations in Yakutia and Arkhangelsk Region. In 2017, the company reported a 6% increase in its diamond output to 39.6 million carats.

Diamonds Are Forever, And Now They’re on The Blockchain

Shine Bright Like a Diamond: Watch a Swarovski Mercedes-Benz Sparkle