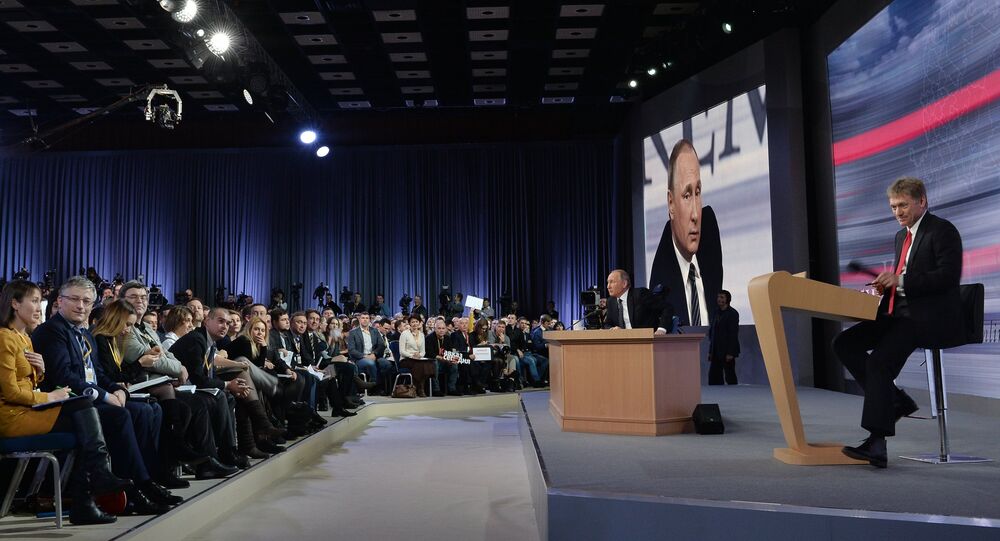 Speaking with the Rossiya 1 TV channel, Kremlin spokesman Dmitry Peskov provided some insight on his professional interactions with Russian President Vladimir Putin and unveiled some of the president’s personal traits.

Talking with the "Actors with Nailya Asker-Zade" TV show on the Rossiya 1 channel, Peskov disclosed that both he and Putin get nervous before the annual big press conference in which Peskov acts as a moderator and host.

"Of course I get nervous! It's a very complicated event. But I think that it is the president who gets nervous the most," Peskov said. "Because, as I think, no other president talks to the press so much, not in such free manner like this."

"He worries the most, but the organizers of the press conference also have difficult time sleeping the night before the event."

Aside from the big press conference, the president's contact with the media is the result of the work of a huge press service staff.

"It is a huge collective, the press service that works around the clock: both monitoring everything out there and creating a digest for the head of state. The materials a prepared several times a day, based on both newswires and the internet."

Peskov said that President Putin is constantly accompanied by a "big enough pool of journalists."

"This pool doesn't fly on a magic carpet and does not summon by magic. That means there is huge, scrupulous organizational work behind this, and a lot of my colleagues are busy working on it."

According to Peskov, the Russian president uses various sources of information and sometimes he improvises, because he has access to information that the press service does not.

"Improvisation happens, because we prepare the data we prepare, but the president — he has lots of various sources. And, of course, he has access to the whole palette, and he often uses information that we could not even think about preparing for him."

The Kremlin spokesman also pointed out that the more colorful expressions and anecdotes that Putin uses are not the result of press service work.

"No, of course not. Not at all. In this case, I would repeat: he has a wider spectrum of sources of information… He has friends who tell him anecdotes, he is a human being after all," Peskov observed.

Peskov also acknowledged that he has been called on the carpet, but he said it doesn't happen often.

Peskov did not elaborate the reasons for which he has been summoned, nor did he disclose whether the president ever speaks with him in anger.

Asked about how he feels speaking with "the most influential person in the world" every day, Peskov said it is the "luck of his whole life."

"It is luck. It is luck of my whole life," he repeated.

Preparation of Putin-Trump Meeting Not on Current Agenda - Peskov