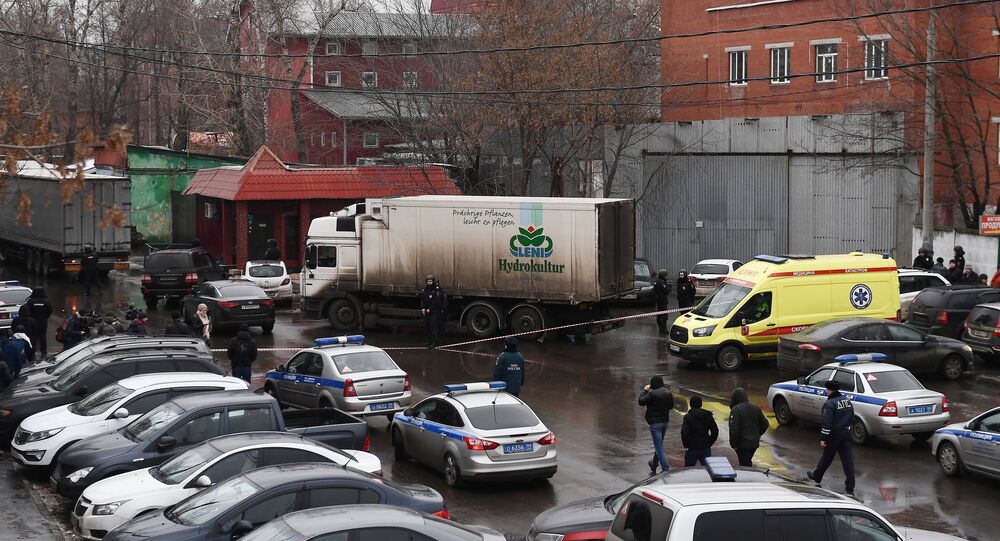 The search for the former owner of the Menshevik factory building in Moscow, who opened fire earlier in the day, is underway.

Russian special police forces, comprising Rosgvardia, have checked the entire territory of the Menshevik factory, where the former director started shooting earlier in the day, but did not find a suspect, the Moscow Department of the Interior Ministry stated on Wednesday, adding that the search zone was expanded.

"The police and Rosgvardia have completed the inspection of the territory and premises of the Menshevik factory. Currently, the search area… is expanded. The operation for his search and detention is still underway," the release says.

Previously, the police and Rosgvardia special forces have cordoned off the area and entered the Menshevik factory building, as Yuri Titov, the spokesman of the Moscow Department of the Interior Ministry told reporters.

"There is a special [police] unit inside, the Rosgvardia staff and the police entered [the building], the suspect is being searched for," Titov said, adding that the territory of the factory is quite large and the law enforcement services' clearance operation was underway.

The Russian Interior Ministry has reported of an unidentified gunman, who opened fire in the Menshevik confectionary factory building in southeast Moscow, claiming the life of at least one person and wounding three.

"The conflict occurred between business entities on the basis of property disputes at around 9:13 a.m., at Ilovaiskaya street, house 20, building 1. One of the participants wounded the other. The victim died from the gunshot inflicted. The police are taking measures to detain the suspect in the shooting," a representative of Russia's Interior Ministry told Sputnik.

Earlier reports claimed that several people were taken hostage, but the police have not confirmed the information.

According to the live footage from the scene, a fire truck with a scaling ladder has arrived, while police officers are clearing the entrance to the factory of parked cars and trucks for the passage of vehicles with special equipment.

A Ural military truck is also near the scene, while police cars continue to arrive, along with special OMON and SOBR Rosgvardia forces.

The gunman is allegedly Ilya Averyanov, the former owner of the factory, who confronted the present one.

"The former owner of the factory, being on its territory, entered into a verbal conflict with the current management. After that, he took out his weapons and shot a few times, injuring the guard, who died of the inflicted injuries," the Russian Investigative Committee reported.

The attacker has reportedly not made any demands and is hiding out in the factory, law enforcement are currently searching for him.

Russian Business FM radio station has managed to contact Averyanov, who has explained the reasons for his actions.

"My factory was taken away from me, using falsified documents, they ruined my business. I have eight children. You know, I've been fighting for four years. They all buy out businesses, forge documents and then win in courts using these falsified documents. This morning I came to work, I was taken by storm — with pistols, weapons. I have a weapon, today I used it for self-defense. One shot I fired, I think, has resulted in a death, unfortunately. This is the whole story. If I stay alive, I'll fight to the end. Now I have been surrounded here, the special forces have surrounded me. It's all right. Now I will either shoot myself or surrender," he said.