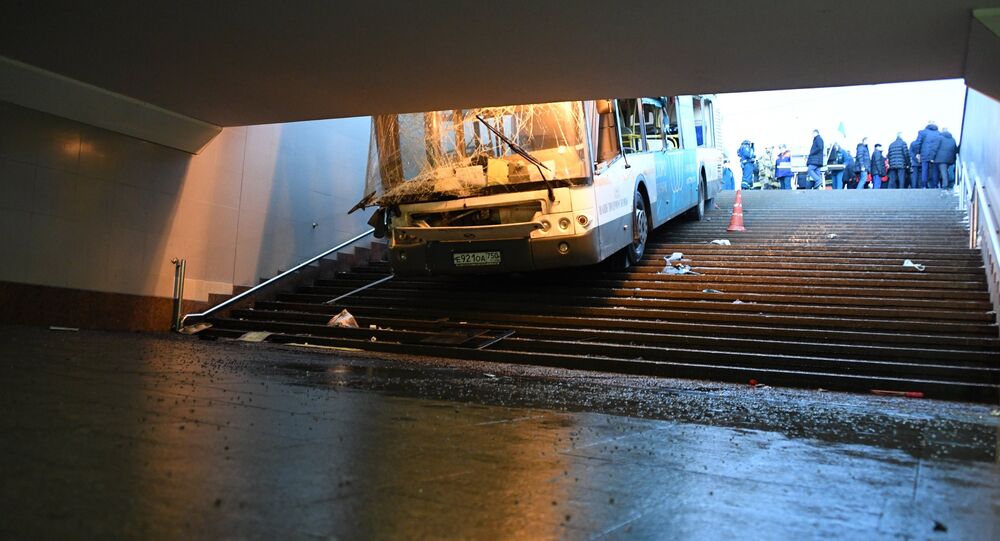 An investigation into the deadly accident is underway. According to the driver of the bus, who has been questioned by police, the vehicle suddenly started moving as the brakes have failed.

A bus has driven into a pedestrian underpass in the center of Moscow, killing at least 5 and injuring 15 others, a source in the emergency services told Sputnik, with the death toll being later confirmed by police.

According to the mayor of Moscow, who has arrived at the scene of the crash, two people are in critical condition as a result of the accident.

"According to preliminary information, a bus drove into the underground passage at the metro station Slavyansky Bulvar," the source said.

The driver of the bus, who was detained earlier in the day, said as quoted by the Russian Investigative Committee that "the bus, while being at the bus stop, suddenly began to move on its own. At the same time, despite his attempts to stop the bus, the braking system malfunctioned and the bus continued to move."

Police have said in a statement that "two versions are being examined: the driver failed to manage the vehicle or a malfunction of the vehicle."

According to the source, a terrorist act is not considered as the possible cause for the accident.

According to media reports, three injured persons have been removed from under the wheels of the bus.

The mayor of Moscow, Sergei Sobyanin, has expressed his condolences to the relatives of those killed in the crash and stated that the authorities are providing the necessary urgent assistance to the injured. Sobyanin has vowed to conduct a "thorough" probe into the deadly accident.

Three medical services' helicopters have evacuated 4 injured people from the scene of the crash.