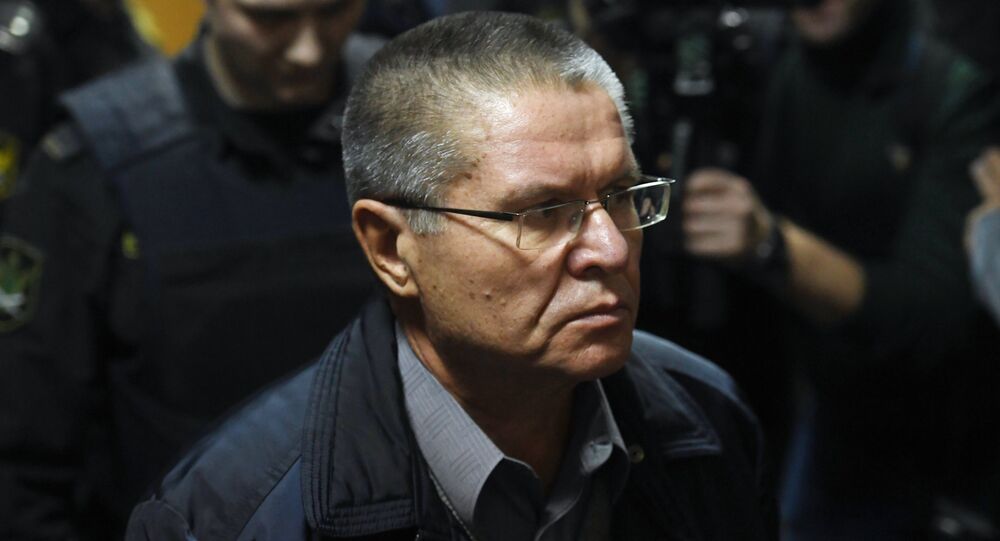 Ulyukaev was accused of accepting a $2-million bribe for allowing Rosneft to buy the state's shares of the Bashneft oil company. The former minister refuted the accusations, saying that the case was fabricated.

A Moscow court ruled on Friday that ex-Russian Economic Development Minister Alexei Ulyukaev is guilty of accepting a bribe as an official and sentenced him to 8 years in penal colony, a Sputnik correspondent reported from the courtroom.

In addition, the former minister was fined more than 130 million roubles for bribe taking.

According to the judge's verdict, Ulyukaev used authority of his position to demand a bribe from Rosneft CEO Igor Sechin, at the same time promising Sechin to further impede the work of the company in case of refusal.

The defense stated, without listening to the verdict up to the end, that the sentence would be appealed.

© REUTERS / Sergei Karpukhin
Ulyukayev's Arrest to Have No Impact on Foreign Investments - Swiss Ambassador
Ulyukaev, 61, was charged with extorting a bribe from state oil company Rosneft, in the first ever corruption case in Russia involving a federal minister.

The Investigative Committee said in November that Ulyukayev was caught in the act of being handed a bag containing $2 million by Sechin for a positive appraisal that allowed Russian energy company Rosneft to buy the state's shares of the Bashneft oil company.

In closing argument, ex-economy minister accused of corruption says he's only guilty of putting career before justice, vows to dedicate rest of life to people. https://t.co/VVPEB8lQL9

Ulyukaev denies his guilt, saying that he believed there were bottles of expensive wine in the bag, that Sechin had allegedly promised him to celebrate the success of the deal.