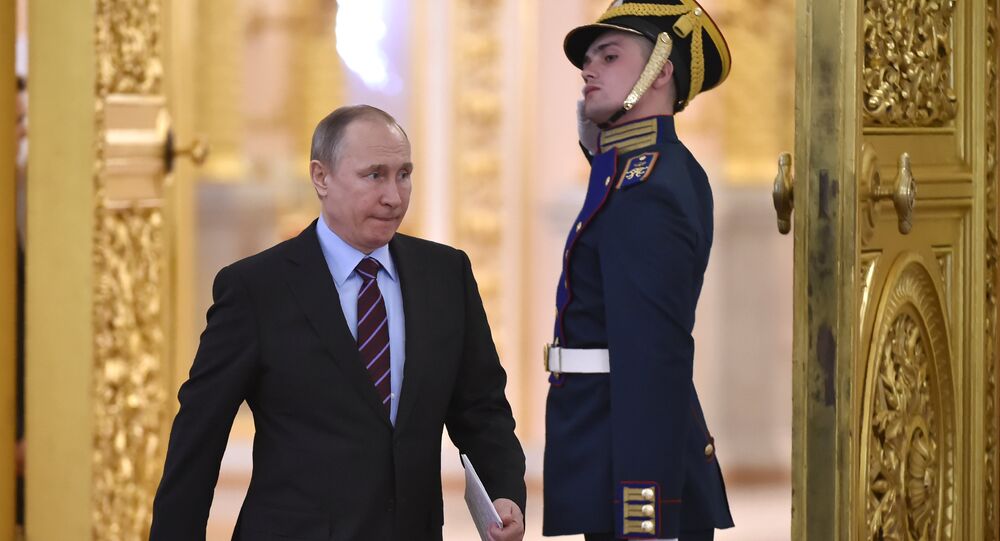 Vladimir Putin entered politics at the national level in 1999, when he became first deputy prime minister, then acting prime minister, and ultimately prime minister. Russia’s first president, Boris Yeltsin, announced his resignation during his 2000 New Year address, shifting his responsibilities until the next presidential election onto Putin.

"A new generation is taking over from us, a generation of those who can do more and better," Boris Yeltsin said during his 2000 New Year speech. Based on the March 2000 election results, Putin became president and held the office until 2008, when he became Prime Minister.

His appearance on the political stage surprised everyone. US journalist Trudy Rubin expressed the Western reaction very aptly those days at the World Economic Forum in Davos back in 2000.

"Who is Mr. Putin?" she asked the Russian delegation, raising general laughter. A year and a half later she had an opportunity to ask Putin himself during a large news conference, which he convened for the first time in 2001. Since then, he's held one annually. Putin answered the question again seven years later, at the 2008 press conference in February of that year, which lasted 4 hours and 40 minutes.

"I think that I have answered this question in deeds if not in words, for the last eight years, by conscientiously fulfilling my duties as head of state. In my view, I have not betrayed the hopes of the citizens of the Russian Federation," he said.

Putin took over a country hit by poorly-implemented economic reforms, with a devalued currency and deep fissures in its political establishment.

"He immediately asserted himself as the national leader, able to unite the country and restore order," Nikolai Mironov, Head of the Center for Economic and Political Reform, said.

Putin spent his first term implementing vital economic reforms, addressing taxation, banking and pensions. One of the most pressing challenges during Putin’s first term was the issue of Chechen separatism, which became all the more dire following terrorist attacks in Moscow and other Russian cities.

"We will persecute terrorists everywhere. [If they are found] in an airport – so be it in an airport… the issue is closed," Putin said in September 1999, while serving as prime minister.

Putin's position regarding terrorists remained unchanged in the following years, including after the attacks in Moscow underground in 2010 and the Airbus A321 plane crash over the Sinai Peninsula in 2016.

© Sputnik / Michael Klimentyev
Top 5 Facts You Have to Know About Vladimir Putin
Putin had to leave his post in 2008, after the end of the second term, as the Russian Constitution prohibited holding the office for more than two consecutive terms. Putin ceded the office to Dmitry Medvedev and took over Medvedev’s position as prime minister, and tasked himself with dealing with the consequences of the 2008 global financial crisis.

"My work in the government during all these very difficult years came as a special trial. It was quite a challenge and I learned a lot from it," he said about his work as the prime minister four years later.

At the United Russia party conference in September 2011, Putin agreed to run for president in 2012. On March 4, 2012, he was elected president for a third time, this time for six years. On his inauguration day, Putin signed a large-scale program of social guarantees that comprised over 200 instructions, also known as the May Executive Orders. Their implementation is considered the gauge of governors’ effectiveness.

Putin focused on geopolitical issues during his third term. The world started to see him as a conservative value-oriented politician. However, this has resulted in the United States placing political and economic pressure on Russia.

Addressing the Munich Security Conference in 2007, Putin slammed US foreign policy and the unipolar world idea — the notion of the globe having one superpower often associated with the term "New World Order." He declared that this model was pernicious and had nothing in common with democracy.

"We are constantly being taught about democracy… But for some reason, those who teach us do not want to learn themselves," he said.

Putin also stressed that Russia was not going to back down from its tradition of implementing an independent foreign policy.

Later the Russian president continued to vigorously uphold the country's interests internationally. This became particularly topical after Crimea voted to rejoin Russia after the Ukrainian coup in 2014, something that led to an unprecedented deterioration of relations with the West. Speaking about the defense of Moscow’s interests and relations with Europe and the United States, Putin repeatedly used the bear metaphor.

"You may remember the wonderful saying: ‘Whatever Jupiter is allowed, the Ox is not.’ We cannot agree with such an approach. The ox may not be allowed something, but the bear will not even bother to ask permission. Here we consider it the master of the taiga, and I know for sure that it does not intend to move to any other climatic zones – it will not feel comfortable there. However, it will not let anyone have its taiga either. I believe this is clear," he said at a meeting of the Valdai International Discussion Club.

© Sputnik / Mikhail Alayeddin
Putin Informed About Daesh's Total Defeat in Syria's Euphrates Valley
In 2015, Russia launched an Airspace Forces operation in Syria at the request of Syrian President Bashar Assad. In early December, Putin announced that with Russian military support, the Syrian armed forces had liberated almost the entire territory of Syria from the terrorists.

Many Western media noted that the Syrian operation was an undoubted success for the Kremlin and a fine advertisement for the Russian defense industry, making Russia important in the Middle East.

"Our participation in the events in Syria and around it has once again confirmed Russia’s role as a world power, without which not a single major world problem can be solved," Federation Council Speaker Valentina Matviyenko said in an interview with Sputnik.

Many people mentioned Putin’s extraordinary working capacity. With his working day at the Kremlin often continuing until the early hours of the morning and despite his extensive travels, he always finds time to keep fit.

"Putin follows his schedule of a sport-addicted workaholic with enviable regularity. Even when his working day lasts until the early hours [of the morning], he'll swim in the swimming pool and exercise in the gym," Kremlin spokesman Dmitry Peskov said.

© AFP 2020 / Kirill KUDRYAVTSEV
Putin: Russia's Suspension from Olympics is Politically Motivated
Sports can be described as one of Putin’s main hobbies. A Master of Sport in sambo and judo, he is often seen on the tatami mat. In addition, he can skate and play hockey, and often plays for the Night Hockey League.

Putin is also known for his love for animals. He has repeatedly appeared in public with his black Labrador Coney. Moreover, an Akita breed dog, Yume, was presented to him by Japanese diplomats a few years ago, and lives in his home. In 2008, an Ussuri tiger cub was given to him as a birthday present. At first, the cub, Masha, lived with him in the Moscow suburb of Novo-Ogaryovo, but later moved to a zoo in Geledgzhik. Other "live" gifts include a crocodile from former Moldovan President Vladimir Voronin, a pony, Vadik, from Tatarstan, and a Karakachan breed puppy from the head of Bulgaria.

Putin has always conveyed the image of a strong, active  leader. He has personally fought forest fires in the Ryazan Region on board a Be-200 amphibious plane, descended to the bottom of Lake Baikal and the Black Sea as part of scientific expeditions, inspected Russian roads at the wheel of a Russian Lada, driven a Formula-1 bolide, flown in a Su-27 interceptor fighter, and piloted a Tu-160 strategic bomber.

Top 5 Facts You Have to Know About Vladimir Putin

Putin Announces He's in the Running for Another Term