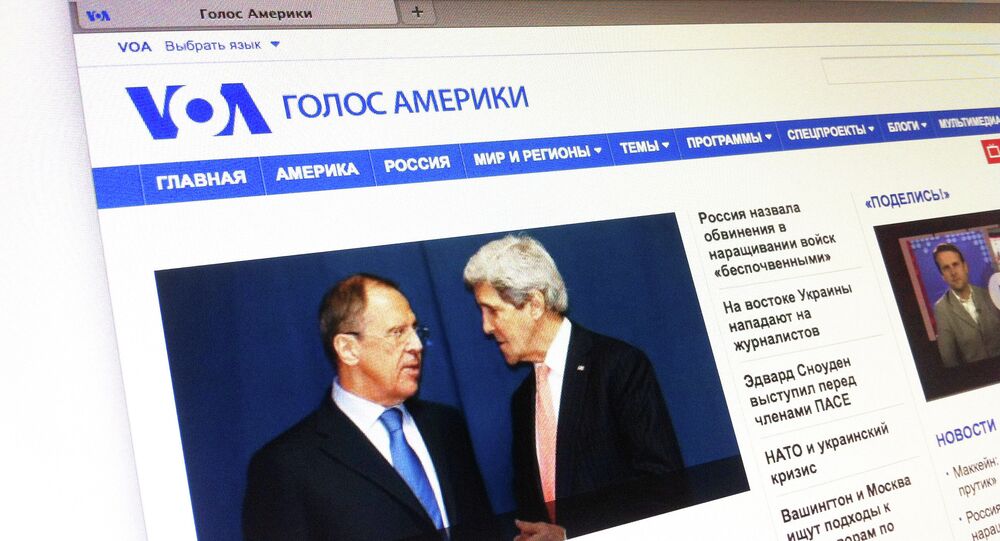 The US Broadcasting Board of Governors has responded to the Russian law on the foreign agent status for media outlets signed by Putin on Saturday, calling for the provision of rights to US media in Russia on the principle of reciprocity.

MOSCOW (Sputnik) — The US Broadcasting Board of Governors (BBG) responsible for such US media as Voice of America (VOA) and Radio Free Europe/Radio Liberty (RFE/RL) views the Russian law on foreign agent status for foreign media outlets as an asymmetric response to the measures, which RT and Sputnik had faced in the United States.

The comment was made after Russian President Vladimir Putin signed the law on the foreign agent status for foreign media outlets funded from abroad on Saturday. The draft law was approved by the Federation Council, the upper house of the Russian parliament, on Wednesday. The law was drafted in response to the pressure put on Russia media in the United States, in particular, the demand for RT America to register as a foreign agent.

"Russian media, including RT and Sputnik, are free to operate in the United States and can be, and are, carried by U.S. cable television outlets and FM radio stations. However, U.S international media, including VOA and RFE/RL, are banned from television and radio in Russia," BBG CEO and Director John Lansing said in a statement issued on Saturday.

The BBG head called on the Russian authorities to provide the same rights for US media in Russia as Russian media have in the United States based on a reciprocity principle.

"The BBG would be pleased if the current focus on reciprocity between Russian and American media ends by giving U.S. outlets – including U.S. international media such as VOA and RFE/RL – the same rights and opportunities in Russia that Russian networks have in the United States," Lansing stressed.

Pressure on RT and Sputnik

A number of media outlets, such as RT and the Sputnik news agency, have faced significant pressure in the United States over the past year, with US lawmakers and intelligence community claiming that the broadcaster may have been involved in Russia’s alleged attempts to influence US 2016 presidential election. RT America registered as a foreign agent in the United States on November 13, upon the request of the US Justice Department.

READ MORE: Fake or Not Fake? Google Out to Determine What News is Real — Expert

Russian authorities have repeatedly refuted these allegations, pointing out the lack of evidence.

Riding on the wave of discontent, Eric Schmidt, the executive chairman of Google's parent company, Alphabet, has announced that the company would "engineer" algorithms that would make it harder for articles from Sputnik News and RT to appear on the Google News service, prompting RT and Sputnik Editor-in-Chief Margarita Simonyan's criticism as previously the US tech giant had confirmed that no violations had been found by the Russian media.