Being born with missing limbs or paralyzed after an accident doesn’t stop these courageous people from living their lives to the fullest.

Svetlana Churakova works as a journalist on television, goes in for archery, modeling and sitting volleyball and takes part in Cybathletics, Russia's first competition for people with high-tech prostheses. She has no issues with being called "disabled" or the black humor associated with this group of individuals. Sergei Rubinstein is a happily married businessman, involved in the testing of Russia's first exoskeleton, which he wears in the office, on walks and even on his wedding day. High technology is helping these people from the Russian city of Arkhangelsk to do what wasn't available to them just several years ago.

Svetlana was born with a diagnosis of "congenital absence of the right forearm," went to a regular kindergarten and school. As a child, she did not think there was "something wrong" with her, but that all changed in her adolescence.

"At the age of 17, I weighed 127 kilograms with a height of 196 centimeters — I just gave up on myself," she told RIA Novosti. "It seemed that the whole world hated me because I'm ‘not like the others.' My peers only fueled up this feeling: They threw stones at me and spat in my face, I was often pursued by companies taking pictures of me on their phones. Even in a laughing crowd, I can still recognize when people are laughing at me," she added. 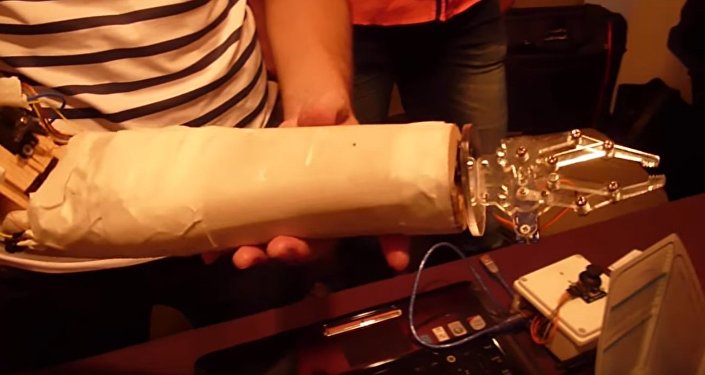 © Photo : YouTube/Sputnik Arabic
Syrian Students Develop Inexpensive Arm Prosthesis for War Victims (VIDEO)
When Sveta was 20, she fell in unrequited love and decided to change her life. In just a year, the girl lost 44 kilos; while studying journalism at the university, she enrolled in another department and competed in a student beauty contest, becoming the first and so far the only participant with a disability.

"It's very annoying that all of my actions are perceived as an act of disobedience to society. For some reason, many people think that when I'm doing something, I'm trying to prove something, but it's not so," she admitted.

In Russia, all citizens with disabilities have the right to receive a technical means of rehabilitation at the expense of the state. It took Svetlana two years to collect all the required documents and assure officials that she actually needs a high-tech prosthetic hand. 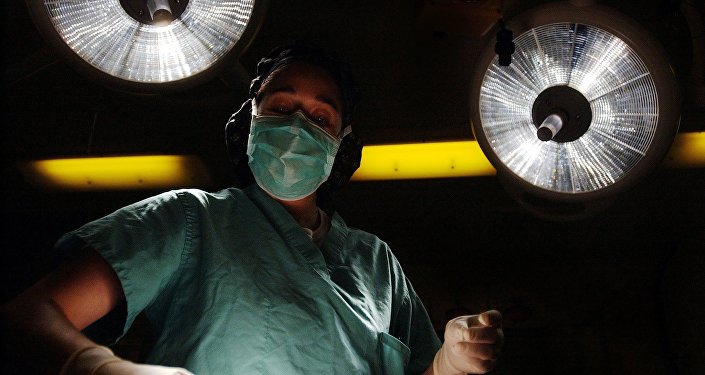 © CC0
Second Sight: Russian Docs Install First Bionic Eye Implant in Blind Patient
As a result, in 2017, Sveta became the owner of I-limb touch bionics, a device manufactured in the UK, which has more than 30 different grips and can be controlled from a smartphone. Inside, the prosthesis has two sensors that understand the impulses of the forearm muscles. Sveta learned to use her "cyberhand" in two days and completely got used to it after several months.

© AP Photo / Jens Meyer
A man presents the bionic prosthesis 'i-limb quantum'at the stand of the company Touch Bionics of Great Britain during the international trade show and world congress OTWorld in Leipzig, eastern Germany. (File)
Previously, Sveta used an artificial limb made to match her skin color, but this time she chose the black prosthesis on purpose and wears clothes with short sleeves. "I get a lot of comments that it's ugly and needs to be hidden. But I realized it's foolish to pretend that something is real when it's not, and it's not only about prostheses," she noted.

According to Svetlana, such an electronic hand is very helpful for people to maintain an active lifestyle. "My prosthetics technician scolds me, saying I have no mercy on my prosthesis. When its creators are fixing its breakdowns, they usually ask: ‘What did she do with it?!' Usually, people who received such prostheses, wear them as if they were made of crystal. And what do I do? I just live a normal life." 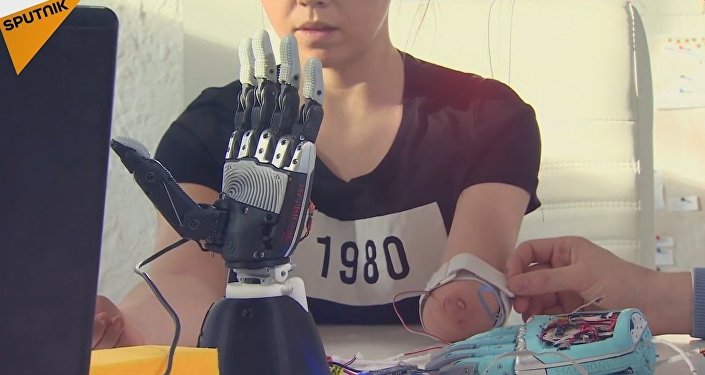 Youtube / Sputnik
Russian Engineer Makes Affordable 3D Printed Bionic Arms
An exoskeleton called "Albert," which is being developed by Russian startup ExoAtlet, helps people with spinal cord traumas during their rehabilitation to get up for the first time in many years and take their first steps. When the company launched tests of its exoskeleton in Arkhangelsk, Sergei Rubinstein was the first volunteer to try it out in his rehabilitation courses.

After an accident in December 2007, wheelchair-bound Sergei didn't know how to live with his trauma. For several years, the man followed the news about the exoskeleton development, and when it finally appeared in his city, he immediately offered himself as a "test pilot."

"At first people are skeptical about the exoskeleton, but when they start walking for the first time, they can't hide their emotions. Some are smiling happily, others start to cry. There was a girl who screamed in surprise. When a person does not move for a long time and then suddenly walks, it's amazing. This is another level of freedom," says Sergei Krenev, an instructor-methodologist in therapeutic physical culture.

Sergei Rubinstein does not only walk in the exoskeleton, but also climbs the stairs. The weight of the device is more than 20 kilograms. It can be operated from a tablet or a "smart" crutch.

Over time, this device should become a comfortable assistant in everyday life, he believes. For the time being, it is the only exoskeleton in the region, which was purchased by local authorities for scientific and clinical research.

Sergei tried to work while piloting the exoskeleton and even has become the first person in Russia to get married in it. "When I mastered the simulator, I realized it was no longer a problem for me to spend 1.5 hours in the church. As I offered my wife a religious matrimonial ceremony, I knew I could stand instead of sitting in a wheelchair," he told RIA Novosti.

© Photo : UPMC/ Pitt Health Sciences
Brain-Controlled Robot Arm Enables Paralyzed Man in US to Feel Again
All patients who are taking a rehabilitation course in the exoskeleton, improve their well-being. About 45 percent of pilots notice high sensitivity in their legs. "After taking his first steps after the injury, Sergei called and said: ‘I felt the muscle.' Before that, there was no reaction from the leg muscles for several years, despite active training," said Elena Bondarenko, associate professor of the Physical Education and Medical Rehabilitation Department at the Northern State Medical University, who coordinates the project.

Such rehabilitation is available in 16 regions of Russia. By 2021, there are plans to develop an exoskeleton for children. "The future has already arrived," said Sergei, "This simulator is very motivating, you start to feel differently about yourself. Today it's an opportunity to walk with its help, and tomorrow, maybe, it will be possible to walk independently."

Russia to Roll Out Its Own Bionic Eyes