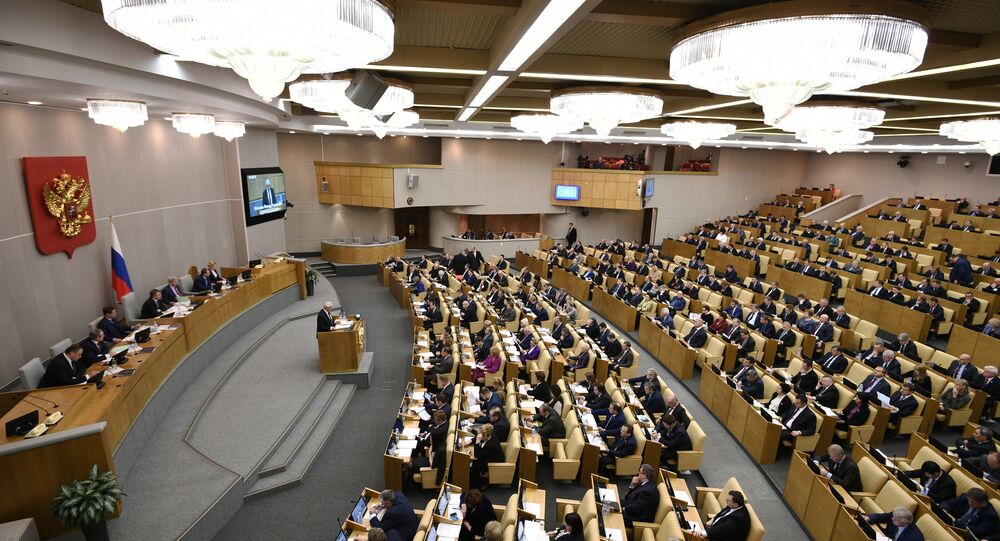 Lawmakers have stressed that the bill on including media outlets operating in Russia but funded from abroad in the Foreign Agents Law is a response to the US actions that forced RT America to register as a foreign agent.

Russia's State Duma has adopted in the third final reading an amendment that allows it to mark media outlets funded by foreign countries as foreign agents, with the Ministry of Justice set to make decision on the issue.

According to a source at the Justice Ministry cited by RIA Novosti, Russia may impose restrictions on the Voice of America as part of response measures.

Radio Free Europe/Radio Liberty has received a notification of its possible recognition as a foreign agent, the source said.

The amendment was developed by a working group led by deputy speaker of Russia's lower house of parliament, Pyotr Tolstoy.

#Parliament session: "I would like to stress that the decision to extend the regulations of the Foreign Agents Law is forced and it will not in any way affect the freedom of press in our country [Russia]," — Pyotr Tolstoy

The amendments were added to the draft law on extrajudicial blocking of organizations' websites banned in Russia which was adopted in October.

According to Vyacheslav Volodin, speaker of Russia's lower house of parliament, the US authorities' decision forces Russia to reciprocate and Russia will also respond to such actions in the future.

According to the first deputy chief of the Council's Foreign Affairs Committee and the former Russian ambassador to the US Sergey Kislyak, "next week the law will be adopted by the Federation Council."

RT Forced to Register Under FARA

RT Editor-in-Chief Margarita Simonyan announced that in order to avoid the closure on the territory of the US the RT broadcaster has agreed to comply with the demand of the US Department of Justice to register under the Foreign Agents Registration Act.

Russian President Vladimir Putin at the 2017 Asia Pacific Economic Cooperation Summit in Vietnam called restrictions on the Russian media outlet "attack on freedom of speech" and stressed that Russia "will have to formulate some kind of response and it will mirror."

According to Simonyan, the US authorities are creating conditions that make it impossible for RT to work in the country because the United States cannot simply shut down the broadcaster, since that would be a violation of press freedoms. The pressure against RT has led to mass resignations in the broadcaster's US office and difficulties in finding new staff.

© Sputnik / Evgeny Biyatov
Moscow: RT, Sputnik Ban by Twitter Reflects Its Dependence on US Establishment
Amid allegations of Russian meddling in the US 2016 election campaign, the US authorities have increased pressure on Russian media. In particular, Twitter banned advertising from the accounts of Russian media outlets RT and Sputnik, with Facebook later claiming that it found election-related posts allegedly used by Russia to influence the outcome of the presidential race.

Responding to the allegations Sputnik said it had never used paid promotion on Twitter, whereas RT revealed that Twitter itself offered the broadcaster to place ads on its platform during 2016 election campaign and concealed this fact during US congressional hearings.