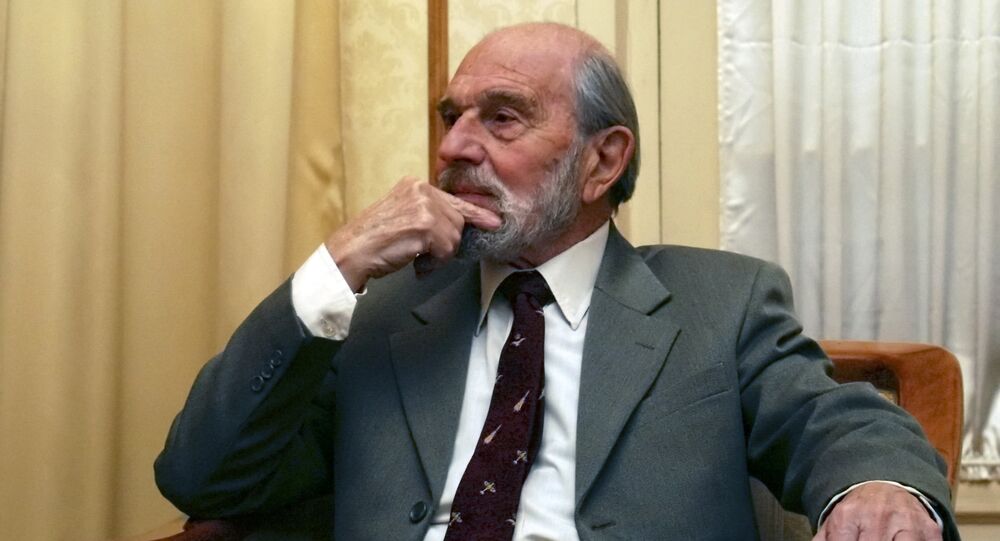 Renowned Soviet intelligence officer George Blake, an earnest anti-fascist who was known for his work in Britain, is turning 95 on Saturday. On the eve of his birthday, he addressed the officers of Russia's Foreign Intelligence Service, defining the top priorities and key mission of Russian spies and revealing what gives him the power to live.

"You are facing an arduous and challenging mission — to save the world in a situation when the danger of nuclear war and the further self-destruction of mankind have been put on the agenda by irresponsible politicians once again. When terrorism has lifted its head and is leaving its bloody traces in many corners of the planet, when there is a real war between Good and Evil. I believe in you, in your unselfish and self-sacrificing service of our common goal, in your professionality. I believe in the final victory over the villainous enemy. And this belief gives me power to live on," George Blake said in his address to the foreign intelligence officers, which was later posted on the official website of Russia's Foreign Intelligence Service (SVR).

© AP Photo / Boris Yurchenko
George Blake, a British defector who spied for the Soviets in Britain, gestures during a news conference in Moscow, Jan. 15, 1992

The former British intelligence officer, who was born in the Netherlands and who once worked as a double agent for the Soviet Union until his arrest in London in 1961, has also noted his biography, which is "known only too well."

One of its characteristic features, he said, is that its major benchmarks are closely interconnected with the choice he should have made at certain times.

"The choice which I made in complicated and contradictory conditions had been defined by history itself. I could have become a peaceful priest but I had become an intelligence officer. I could have quietly lived through the war however I preferred the dangerous life of an active participant of the Resistance Movement. After miraculously avoiding Nazi concentration camps, I became an officer of the British Special Force and risked my life more than once…" he recalled.

Blake was recruited by MI6, the UK’s foreign intelligence service in 1944, after joining the Royal Navy.  He was serving in Korea when the war there erupted in 1950 and was detained by the North. He said he volunteered to work for the Soviet Union after witnessing ruthless US bombing of North Korea's towns and villages.

According to the officer, after the end of the Second World War, while still a British intelligence officer, he was "in the first ranks of Russia's enemies," in a nod to the country which later became his motherland. He recalls the "real face" of the horrible Korean War, the bodies of civilians of that long-suffering country, who had been killed the "American military machine."

"It was then when I realized that such conflicts bring deadly dangers for all mankind and made the most important decision of my life – to voluntarily and gratuitously cooperate with the Soviet intelligence to protect peace in the world,” he revealed.

As a double agent, the legendary serviceman also worked in Berlin, where he passed some of the most coveted British secrets to the Soviet Union, including a Western plan to dig a tunnel from West Berlin to the east, to tap telephone lines in the east.

He was foiled by a Polish defector in 1961and was jailed by a British court for 42 years. In 1966, however he was able to escape from Wormwood Scrubs prison in London and fled to Berlin through France. In Berlin, he travelled from west to east in a wooden box attached to the undercarriage of a car. He ended up in Russia, where he has been living ever since.

"95 years. It is too much for a single person. And too little in the life span of humankind. The memories of my past, which repeatedly said I do not regret not in the least, gives me strength to look to the future with optimism," George Blake concluded.